Back on top and how | Inquirer Sports
Close
menu
search

Back on top and how 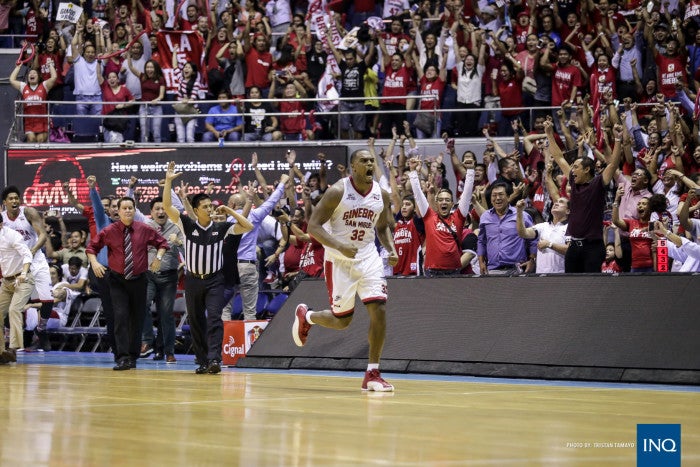 Justin Brownlee missed the Best Import award but not the shot that mattered most as Barangay Ginebra San Miguel ended its eight-year title drought in the Philippine Basketball Association by ruling the Governors’ Cup over Meralco last Wednesday.

Brownlee delivered the buzzer-beating triple from way off the three-point line that boosted the Gin Kings past the Bolts, 91-88, and decided the best-of-seven series, 4-2, before a delirious overflow crowd, most of them pro-Ginebra diehards, at Smart Araneta Coliseum.

The emergency replacement for original Ginebra import Paul Harris, who broke his right thumb in his very first outing in the season-ending tournament, had scored from an even farther distance in a virtual catch-and-shoot situation with 11.2 seconds left in Game 3 to bring the Gin Kings within 103-105.

But Allen Durham justified his selection as Best Import before the game by nailing two free throws to save the game for the Bolts, 107-103, and give Meralco a 2-1 lead. Durham also keyed Meralco’s opening overtime win in the series with a 46-point job  in a 114-109 decision.

Brownlee, who cramped up in his first game for Ginebra which resulted in a 109-100 overtime loss to Alaska, went on to dominate Durham from there. And with timely help from the locals led by LA Tenorio, the Gin Kings won three straight games for the first time in the series to nail their first championship since the 2008 Commissioner’s Cup and the 19th title for coach Tim Cone.

The victory was a fitting redemption for Tenorio, the Most Valuable Player when Gilas Pilipinas topped the Jones Cup in Taipei in 2012.  He was relegated as the country’s No. 2 point guard after Jason Castro made it to the Mythical Five of the  Fiba Asia championship held here in 2013.  Worse, Tenorio and Calvin Abueva of Alaska were  cut from the Gilas squad that took a desperate and vain chase of the lone Olympic  cage slot from Asia in the qualifying the country hosted early this year.

Masterfully quarterbacking the Gin Kings, Tenorio not only called the shots but also made them while working the Ginebra backcourt with rookie Scottie Thompson and journeyman Sol Mercado.

Tenorio provided the firepower that gave Ginebra momentum in Game 6  after the Gin Kings had trailed by 15 early in the third quarter. Mercado, whose sticky defense  helped in pushing Durman out of his comfort zone, had scored on a key followup in the dying seconds that helped settle the issue in Game 2, 82-79.  Along with Thompson, a prized find from the Perpetual Help Altas, the three Ginebra guards combined to secure the series’ most lopsided win, 92-81,  in Game 5.

But it was Game 4 that proved key for the Gin Kings, who  tied the series behind the heroics of two Ginebra stars  known as the ‘Fast and Furious’ in their prime.

Jay-Jay Helterbrand, who was turning 40 in the game marked by two scoring upheavals, and Mark Caguioa, 36, recalled their brilliant past and the crowd all but brought the Big Dome down as it roared with approval.

Ginebra had leaned on a hot start to lead by 14 points in the second quarter, but Meralco responded with a 39-12 blast to forge ahead at 74-58 at the end of the third period.

Helterbrand, reportedly on his way to retirement, then  unloaded 11 points, nine of them on triples, while Caguioa added four in an unbelievable 25-4 fightback that boosted Ginebra ahead for good at 83-78.

Then Joe Devance, whom Cone brought along from San Mig Coffee (now Star) when he was tapped to end Ginebra’s title woes, wrapped up his five-point cluster with a jumper with 25 seconds left for the final 88-86  count.

Cone promised more championships for the Kings after the long-awaited triumph and it’s not an empty boast with Ginebra’s 7-foot center Greg  Slaughter, who didn’t even get to finish his initial outing in the tournament due to a knee injury, set to rejoin the team in the coming season set for a Nov. 20 opening.