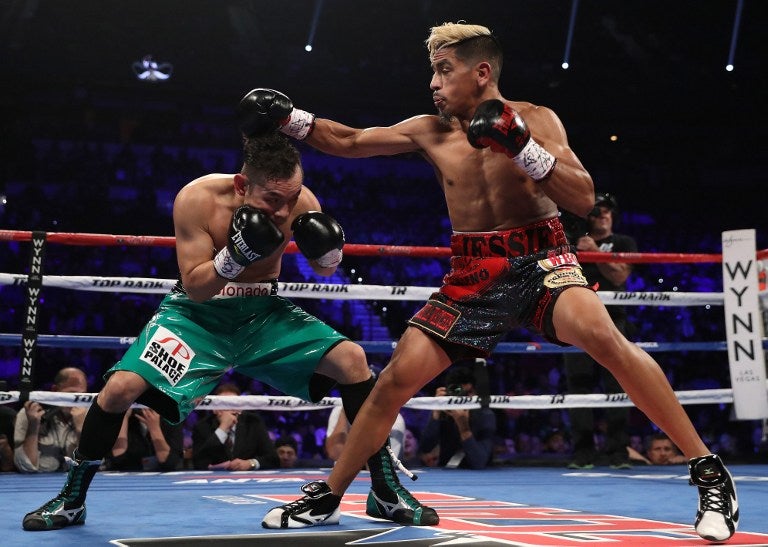 Jessie Magdaleno lands a right to the head of opponent Nonito Donaire of the Philippines during their WBO junior featherweight championship fight at the Thomas & Mack Center on November 5, 2016 in Las Vegas, Nevada. Christian Petersen/Getty Images/AFP

Jessie Magdaleno made a proper introduction into the boxing world after a stunning victory over Nonito Donaire via unanimous decision Sunday (Manila time) at Thomas & Mack Center.

The 24-year-old challenger walked away with Donaire’s WBO World super bantamweight title as he upped his undefeated record to 24-0 while the former champion slipped to 37-4 and saw his four-fight win streak come to an end.

Magdaleno, who was ahead in all three score cards, 116-112, 116-112, 118-110, pressed the issue in the ninth round when he pinned Donaire in the ropes and unleashed multiple combinations to the head of the champion.

Undefeated Magdaleno grew up in Las Vegas but was fighting with Mexico printed on his red and black trunks and was serenaded by chants of “Mexico, Mexico” several times during the fight.

Coming into the fight, Magdaleno was the number one contender, having won eight of his last 10 fights by knockout.

Donaire suffered just the fourth loss of his career despite doing well at the end of the rounds late in the fight.

In the 10th, the Filipino wobbled Magdaleno with good right hard punches at the beginning and end of the round.

The two traded heavy blows in the 12th with the crowd on its feet for the final round.

“We definitely won the fight. Losing never crossed my mind,” said Donaire. “I never thought I could lose this. I had a great second half and I thought I controlled the fight.” Agence France-Presse/rga