Body language and the lure of another big payday point to a Pacquiao Mayweather rematch
By: Roy Luarca - Editor / @RLuarcaINQ
Philippine Daily Inquirer / 12:19 AM November 13, 2016 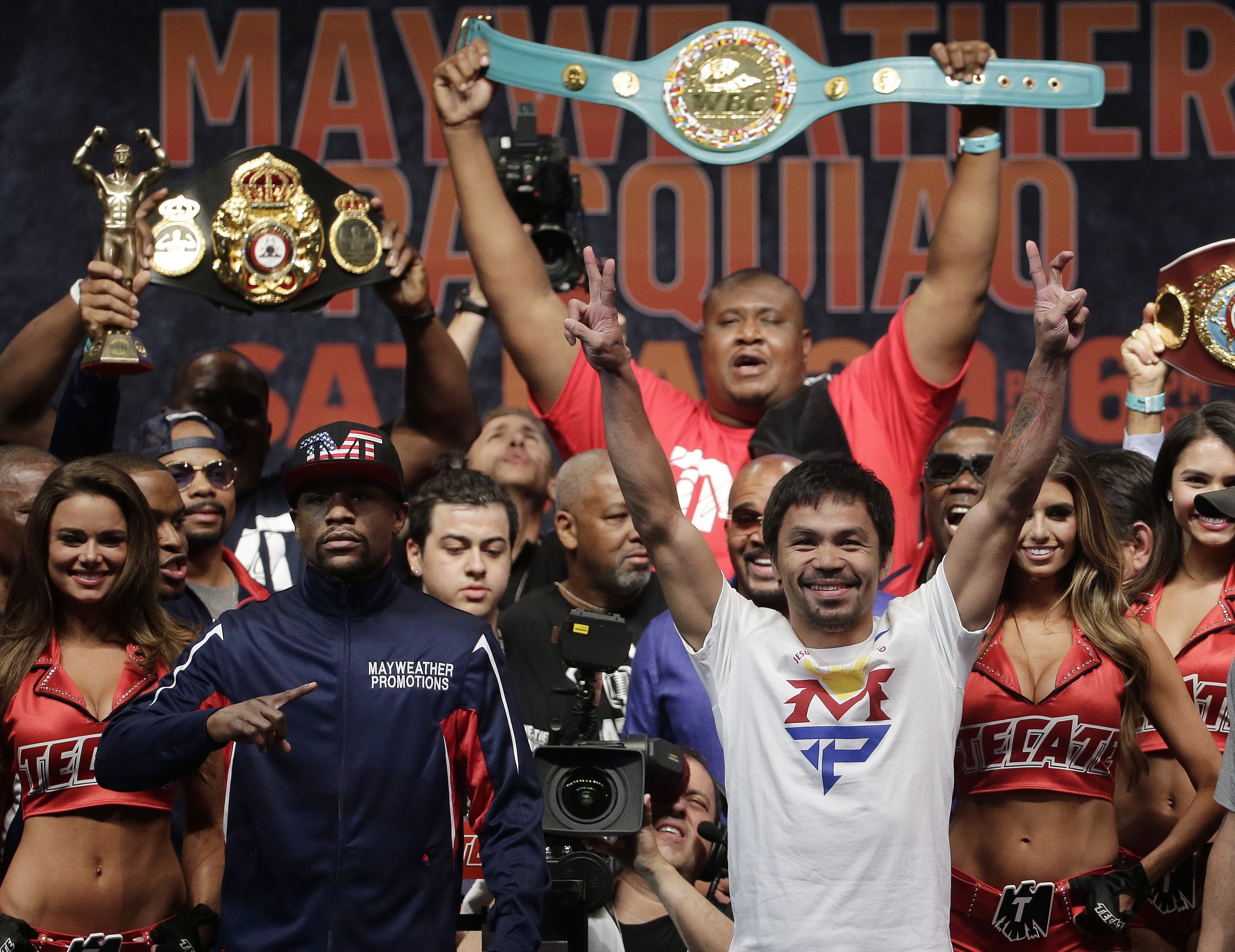 Floyd Mayweather Jr., left, and Manny Pacquiao pose during their weigh-in on Friday, May 1, 2015 in Las Vegas. The world weltherweight title fight between Mayweather Jr. and Pacquiao is scheduled for May 2. (AP Photo/Chris Carlson)

When Manny Pacquiao glanced at Floyd Mayweather Jr. after taking Jessie Vargas to school Saturday night, he was fishing for an opinion.

And his special guest reciprocated by giving his former bitter rival the thumbs up.

That simple gesture signifies the new cordial relationship between the two most bankable, most influential fighters of their generation.

Pacquiao came out of brief retirement to chase history, while Mayweather, the highest-earning athlete in the world from 2011 to 2015, hinted at giving boxing another shot by returning to his own gym to train.

It was just casual talk, but Roach couldn’t help but wonder what Mayweather’s intentions were.

Pacquiao, meanwhile, carefully managed his waking hours by running in the morning, doing his legislative work in the afternoon and training in the gym at night. Counting time spent for reflection and preaching, Pacquiao normally puts in 16 hours of work a day.

But he pushed himself and returned to form less than two weeks before his 12-round pay-per-view (PPV) tussle with World Boxing Organization welterweight king Vargas.

Capitalizing on his vaunted speed, Pacquiao sneaked in more punches on fewer attempts en route to a unanimous decision—118-109 twice and a bum 114-113 count—over Vargas before a crowd of 16,132 at Thomas & Mack Center in Las Vegas.

Pacquiao thus added another chapter to his boxing legacy, the first incumbent senator, from the Philippines and elsewhere, to become a world champion in any sport.

Not only that, Pacquiao vaulted to the top of the pound-for-pound rankings again and is sure to contend for Fighter of the Year honors.

It will make Mayweather take a second look at him as probable foe if the flamboyant American—who left the sport with a 49-0 slate last year—decides to make a comeback next spring.

Mayweather must have been satisfied with the way Pacquiao fought Vargas as he summed up his comment in just two words: “Not bad.”

Coming from the dude who beat him in their blockbuster bout—over $600 million in revenues, 4.6 million PPV buys at $100 each pop—last year, Pacquiao readily accepted it as a compliment.

With an unwilling dance partner in Vargas, Pacquiao (59 wins, six losses, two defeats, 38 KOs) failed to end a seven-year knockout drought, which is actually in Mayweather’s liking; the Money is not a power puncher himself (26 KOs). Pacquiao’s last stoppage came in 2009, when the referee stopped the beating he was handing Miguel Cotto.

Though Roach expressed disappointment at Pacquiao’s failure to finish off Vargas, he said the senator still has a couple of fights left in him.

Vargas, 10 years younger than Pacquiao at 27, must have felt the power too. Otherwise, he would have engaged the eight-division world champion in a slugfest.

Against whom, nobody can’t tell for now.

Roach is receptive to the idea of pitting Pacquiao against Canelo Alvarez at 154 pounds. There will be no catch weight, but the seven-time Trainer of the Year wants to put a cap on how much Alvarez can bulk up on fight night.

Pacquiao, however, is hesitant to return to super welterweight. Remember that in 2010, Pacquiao was dwarfed by Antonio Margarito, who rehydrated to 165 lb on fight night after making the 150 lb catchweight. From 144.6 lb at weigh-in, Pacquiao could only rise to 148.

Though Pacquiao dominated the 5-foot-11 Margarito, he had to settle for unanimous decision as the referee allowed the injured and bloodied Mexican to continue fighting.

During the post-fight press conference of Pacquiao-Vargas, promoter Bob Arum of Top Rank Inc. mentioned in-house candidates like Terence Crawford and Vasyl Lomachenco as Pacquiao’s next foe. Arum also stressed that as far as he is concerned Mayweather is retired.

Less than 48 hours later, he reversed gears and announced there’s a 75-percent chance that Pacquiao-Mayweather II will happen next year.

While Pacquiao says that he is open to a rematch, Mayweather has yet to make a statement. By his actuations, however, Mayweather appears to be veering on the affirmative side.

After all, there’s too much money on the line if the sequel pushes through. If Part II earns just half as much as the first encounter, it would mean over $300 million in revenues.

Pacquiao, for sure, won’t get that big payday against Crawford, Lomachenko or even Adrien Broner. Neither will Mayweather versus another star like Genadyn Golovkin.

Only if they fight one another, will the ante rise. They may be sending mixed signals just to feel the fans’ pulse on a rematch.

If there’s strong clamor for it, Pacquiao and Mayweather will agree to one final dance.