McGregor to be a father after historic win, wants UFC equity 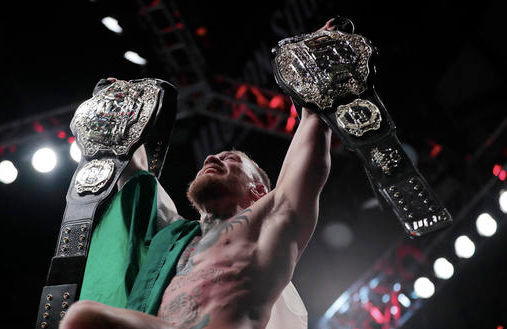 In a feat that no other mixed martial artist from the UFC had ever done, Conor McGregor became a simultaneous two-division world champion after destroying Eddie Alvarez at the main event of UFC 205 on Saturday (Sunday in Manila).

Undoubtedly the biggest star of the promotion, the UFC featherweight and lightweight titleholder had been hinting at two huge personal announcements leading to the historic Madison Square Garden card.

Speaking to members of the media during the mandatory post-fight conference, the Irish sensation revealed that he and his longtime girlfriend, Dee Devlin, are expecting a mini-“Notorious” sometime in May next year.

“There’s a few bombshells I wanted to hit, but then it was like ‘do I do it or don’t do it?’ One announcement, I’m going to be a daddy early next year,” McGregor said via MMAFighting. “I’m crapping me jocks, I’m not going to lie. I don’t even know what way to take it. It’s messing with me head because I don’t want to be bringing a child into this. I don’t even want to do the celebrity type (expletive). I hate all that. I don’t want my family to be like that.”

The 29-year-old superstar has been quite active inside the octagon and fought for the company 10 times since debuting in 2013. With a baby on the way and a shiny new belt around his waist, McGregor believes he deserves a little break from fighting.

“I’m just going to have this baby, take a little bit of time and see what way I feel after that,” he said.

Aside from his pending fatherly duties, McGregor also took the time to address an issue regarding the company’s new ownership, and talked about receiving some sort of equity from the new owners, WME-IMG.

“They’ve got to come talk to me now. ‘Cause no one has come talk to me since the sale happened as a businessman,” he described owners Ari Emaneul and Patrick Whitesell, who were both in attendance in New York. “I’ve been approached as a ‘hello’ and that type of stuff but I’ve earned something. Who owns the company now? There’s people that have shares in the company, celebrities, Conan O’Brien owns the UFC now. So where’s my share? Where’s my equity?” he said.

According to UFC President Dana White, last weekend’s event raked in a record-setting $17 million at the gate and will most likely break the all time pay-per-view record for the company as well.

Such imposing figures is sure to bring in quite a fortune for the company, and its biggest star is demanding a bigger piece of the cake if they want to retain his services.

“I’m aware of my worth and now I’ve got a family. Now I’ve got a kid on the way. I’m coming for mine now if you want me back,” McGregor said.

“I’ve got both belts, a chunk of money, a little family on the way. You want me to stick around, you want me to keep doing what I’m doing, let’s talk, but I want ownership. I want an equal share. I want what I deserve, what I’ve earned.”  Khristian Ibarrola