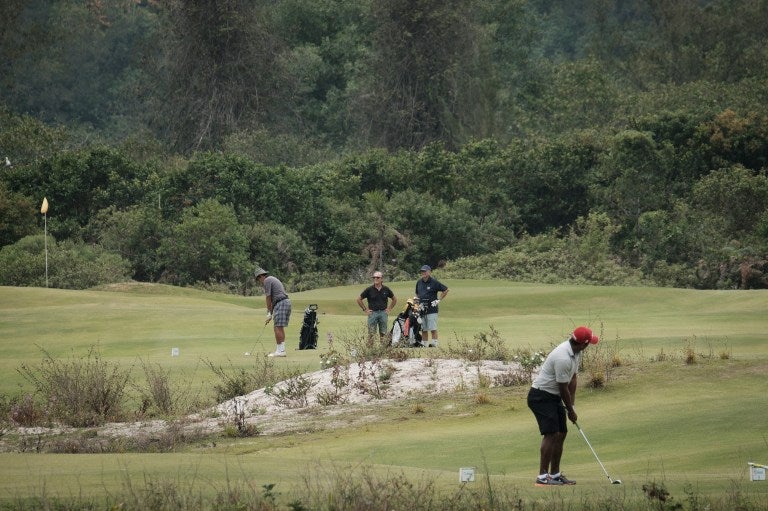 Golfers play on the Olympic golf course, created and used for Rio 2016 Olympic games and now run by the Brazilian Golf Confederation for the public, in Rio de Janeiro, Brazil, on November 23, 2016. / AFP PHOTO / YASUYOSHI CHIBA

Just three months after the Olympics ended, Rio’s beautiful but controversial golf course is eerily quiet with the squawks of birds far louder than the whack of balls.

Built specially for the Olympics on what had been a nature reserve next to the beach in western Rio, the links-style course was meant to convert Brazilians to a sport they barely know and put Rio on the international golfing map.

Instead, the $19 million facility created by star US designer Gil Hanse risks turning into a white elephant. A payment dispute could even lead to the imminent exit of the company responsible for upkeep, raising questions over the course’s survival.

During a visit by AFP this week, just three people were hitting balls at the driving range. The main course was closed for maintenance but even when open 20 people would be considered a good crowd, with numbers rising a little on weekends, employees said.

The clubhouse was not only empty but almost entirely unfurnished.

In the cafe, which has no chairs, a solitary waiter and a second man there to collect greens fees waited in silence for customers.

A course that merely weeks ago hosted some of the world’s best golfers has no pro-shop or a pro. There is no website. Even getting there can be tricky: there are no road signs indicating the entrance.

Birds and butterflies flit through the rough. A capybara — a squat, heavy-set rodent that grows to the size of a dog — waddles next to one of the water hazards.

And when a big caiman — a cousin of the alligator — surfaces from the pond, the impression of a land that time forgot seems complete.

Rio de Janeiro’s two other golf courses are not up to international standards and belong to exclusive private clubs. The Olympic course, run by the Brazilian Golf Confederation, is public.

But few Brazilians play the game and the greens fees are high enough to put many off: $74-$82 per person for residents, and $192 for foreigner visitors.

With so few locals playing and no obvious plan for attracting foreigners, funding is already a problem.

Neil Cleverly, the Briton who built the course and now manages the upkeep, says the company he works for, Progolf, has not been paid for two months.

“What happens when we run out of gas or diesel? We’ve been close,” Cleverly said. “None of us know if there’ll be a job for us in December.”

A source close to the company who asked not to be identified said Progolf has been given no contract by the confederation and, having been forced to foot the $82,000 monthly maintenance operation out of its own pocket, is set to pull out.

Maybe “next month,” the source said.

If that happens, the confederation would quickly have to find expert replacements before damage set in.

Without maintenance, “the golf course will die,” the source said. “It could take four weeks, three weeks.”

Repeated requests from AFP for reaction from the confederation were not answered.

Cleverly, who describes the Rio project as the most challenging of his globe-trotting career, shakes his head at the mess.

“It’s so frustrating for us to get as far as we did. A lot of people said you’re never going to do it,” he said, recalling the challenge of building in Brazil.

“So yes, I’m disappointed and it’s mixed up with a lot of frustration.”

There was also dismay among the handful of Brazilian retirees who’d come to practice. They praised the course while wondering how long it can last.

“The course is spectacular,” Roberto Maueler, 61, said, but “people are really worried.”

“We have a movement of golfers trying to pressure the authorities and the confederation to keep the course going,” he said.

Luiz Villaboim, 64, called the course fascinating. “We’ve seen owls here. There are capybaras and caimans,” he said as he worked on his swing.

But the absence of more basic features puzzles him.

“It seems that nothing has been done for the course since the Olympics.”

Read Next
Rooney leads Man United to 4-0 win with record-breaking goal
EDITORS' PICK
House energy committee chair Arroyo bats for cheap electricity
Unleash the photographer in you this World Photography Day with vivo smartphones
DOH says COVID-19 cases plateauing, but public shouldn’t be ‘complacent’
23,000 cops to be deployed nationwide for school reopening
Look Through: The fate of impounded stray dogs
What to watch out for when selecting a video surveillance solution
MOST READ
Solons file resolutions seeking probe on ABS-CBN, TV5 merger
Korina Sanchez reunites with former ABS-CBN co-anchors Julius Babao, Cheryl Cosim
Light therapy could be the answer to your sleep problems
Sharon Cuneta asks for prayers for friend in ICU who suffered silent stroke
Don't miss out on the latest news and information.