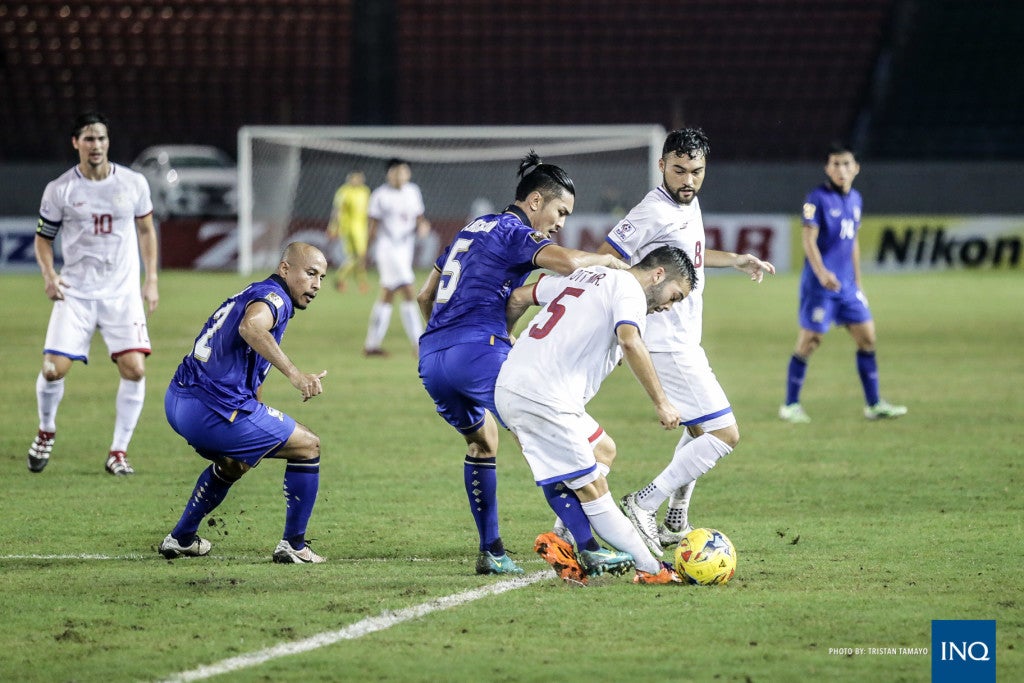 An AFF Suzuki Cup between Philippines and Thailand at the Philippine Sports Stadium in Bocaue, Bulacan. Photo by Tristan Tamayo/INQUIRER.net

What was supposed to be a showcase of the progress of the Philippine national team the past six years became an illustration of the amount of work that needs to be done to keep the Azkals in the upper echelons of Southeast Asian football.

Being Southeast Asia’s top-ranked team and host of the group stage for the first time, the Azkals entered the Asean Football Federation (AFF) Suzuki Cup as one of the favorites to advance to the semifinals, despite the presence of former semifinal conquerors Thailand, Singapore and Indonesia.

But the Azkals came to grief Friday night after losing to Thailand, 0-1, before another sparse crowd at faraway Philippine Sports Stadium in Bocaue, Bulacan. The tournament went down the wire—down to the last six minutes of the final Group A matches last Friday night, when the last semifinalist from the group was decided.

Thailand, unbeaten in three matches, and Indonesia, which fought back from a goal down to beat Singapore, 2-1, advanced. The Philippines and Singapore got the boot.

Two points from three matches weren’t enough and, after Sarawut Masuk beat Roland Muller on the breakaway in the 81st minute, the Azkals’ run of three semifinal appearances in the tournament came to a halt.

The result against the Thais would have been enough had Indonesia and Singapore drew in a simultaneous match at Rizal Memorial Stadium. But Stefano Lilipaly, the Dutch-Indonesian midfielder, lived up to the hype, banging in a volley from inside the area to send the perennially underachieving Indonesians to the next round.

While the small Indonesian contingent whooped it up at the final whistle in Manila, there was heartbreak  in Bocaue—a pain that was the exact opposite of the mood in past AFF Suzuki Cup tournaments when the Azkals bucked odds and took down some of the region’s best teams.

Midfielder Stephan Schrock minced no words as the Azkals came to grips with the result. “It’s a disaster,” he said. “We are all disappointed at the moment. We won’t shy from it.”

The Azkals may have been doomed from the start. Unable to sustain the momentum of their stunning 3-2 win over North Korea in World Cup Qualifying last March, the Azkals— out of action for the next five months—groped for form.

The preparation was far from ideal and all the signs were there for everyone to see when they suffered friendly losses to Bahrain and North Korea last October. Azkals coach Thomas Dooley saw no reason to panic. “If the Suzuki Cup were [held] tomorrow then I would be worried,” Dooley said then.

He said he had a good plan in the Suzuki Cup and the players were firm in their belief that they could break new ground in the tournament. “I believe in the players and in our capability as a team,” said Phil Younghusband, the Azkals skipper.

Younghusband’s statement may have masked the concerns within the squad. There were just too many players playing out of position, including Younghusband himself—a prolific striker now deployed as a defensive midfielder by Dooley. There was a lack of defenders in the squad. The vocal leaders of past runs such as Rob Gier were no longer around and nobody seemed ready to take the leadership mantle.

To watch it all unfold—and unravel—in the Suzuki Cup, in front of Filipino fans, was tough to take. But even in diversity, there was always faith in the team’s capacity to pull through. Not this time.

The Azkals struggled to break down Singapore even though the enemy was down to 10 men, managing just a a point from the scoreless draw. The second match offered hope as the Azkals, showing the never-say-die spirit of old, fought back from a goal down twice to hold off Indonesia, 2-2, setting the stage for a tight Group A finish.

Younghusband’s curling free kick for the equalizer in the 81st minute was a reminder of his quality when he’s closer to goal. But it was still in the Azkals’ hands heading into the match against Thailand, which had already qualified after winning its first two matches.

The Thais had the luxury of resting their stars, like Teerasil Dangda and Chanathip Songkrasin, but even their so-called “B” team is filled with talented players.

Dooley gambled on his defense, this time putting 17-year-old Marco Casambre at central defense alongside Amani Aguinaldo. And while the teenager acquitted himself after a shaky start, Dooley sacrificed him for the more attack-minded Kevin Ingreso in search of a winner late on against the Thais.

The move backfired as the back line, already settled before Casambre left, allowed Sarawut to score on the breakaway. It was one gamble too many for Dooley.

“Obviously, this is not what everybody expected,” said Dooley. “We created a lot of chances, we didn’t have 100-percent chances, but we had six, seven, maybe eight good chances. We wanted to run a little bit because we knew the score from Singapore-Indonesia. Maybe it was a little too risky trying to play offside.”

In the end, the Thais, a class above the rest with their quality and free-flowing style, deserved topping Group A. The Indonesians also earned their berth to the next round by playing without fear on attack.

As for the Azkals, there will be plenty of scrutiny in the coming months with the next competition slated in March yet. The positives cannot be ignored, though, with Casambre emerging as a viable option at the back and Pika Minegishi and Mike Ott bringing attacking verve.

Still, there will be questions that need to be answered before the team takes the next step forward. Is a revamp on the cards? Is Dooley still the man for the job? Is the Philippine Football Federation developing enough talent from the age-group level to make the senior team? Can the Azkals prepare poorly and still expect to get away with wins? Are games promoted enough to fill the stadium for the Azkals’ home games?

The period of introspection begins.

“There’s always tomorrow and there are always some positive things to take away,” said Schrock. “We’ll analyze that and come back stronger.”

Read Next
Four squads mix it up for final 4 berths
EDITORS' PICK
Water remains our saving grace right now
Smart poised to turn PH into ‘Smart 5G country’ with nationwide rollout
Get 80% OFF Ignite 2020 Cyber Tickets starting 28 September
House to probe Facebook takedown of gov’t accounts
Duterte meets with Cayetano, Velasco amid speakership issue
Feud is over: Velasco next Speaker on Oct. 14
MOST READ
Velasco to take over as Speaker on Oct. 14
Gun attack in PMA: Air Force man killed, 2 others wounded
‘I offered to resign’ because of endless corruption, says Duterte
Duterte will ask Congress to abolish PhilHealth
Don't miss out on the latest news and information.