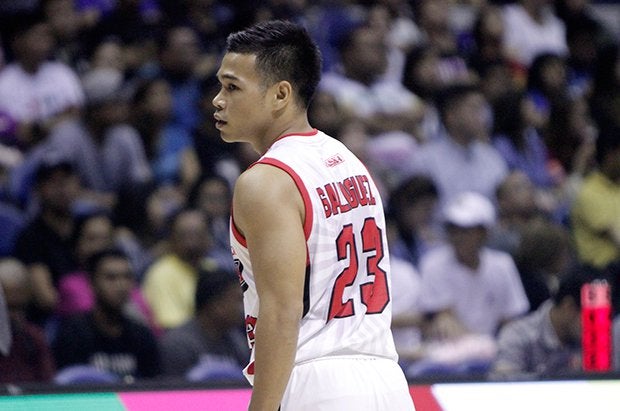 Urging the management to re-sign Abel Galliguez, Marion Magat, and Jaypee Mendoza in the offseason, these seldom-used players repaid the Aces mentor of his faith, keeping the team afloat in their game against San Miguel on Saturday.

Without seven of its key players, Alaska still gave the two-time defending champs all it could handle before the Beermen escaped with a tough 93-88 victory.

And all the credit goes to these guys, who fought hard to support the load carried by JVee Casio, Tony dela Cruz, and rookie Carl Bryan Cruz.

“You saw all of those guys compete and contribute. I was so proud of them. The most significant minutes of their career was against the two-time defending champions,” the American coach said.

In true Alaska fashion, the undermanned Aces gave it their all, punishing a dazed San Miguel crew and even led by 15 points at one point.

And Compton couldn’t be any more honored to have coached this bunch.

“I said we we’re going to be tiny and we’re going to play hard, and we did. You’ll have a hard time playing against June Mar (Fajardo) anyway. Even though when we had Sonny (Thoss) and Noy (Baclao), we’re still going to be small,” he said. “Obviously, we had some miscues in the end, but my feeling that I shared with the guys was kind of proud disappointment.”

“I’m proud of their effort, but disappointment with them because I felt that as hard as they play, as much as they try, I couldn’t ask more from them. I want them to win for the effort, but we didn’t. San Miguel beat us, they deserved it. I think the team pretty hard.”

Still winless in the 2017 PBA Philippine Cup, Compton isn’t pressing the panic button anytime soon, knowing that he has a team that is ready to fight hard no matter what the circumstances are.

And he’s putting a positive spin on it despite the Aces’ 0-2 record.

“I don’t want to put this as a prophecy, but as I recall, a lot of teams coach Tim (Cone) handled have started out slow and they won the championship,” he said.

“We’re not going on some prize at the top of eliminations. We want to win the championship and honestly at this point, it’s going to be difficult for us. We’re just trying to get better in the playoffs with all the injuries that we have. We’re going to be small for a while, but if we fight like this, if we’ll scrap out that way, then I think the fans should be proud.”