“My beautiful family.” Doug with Cheska Garcia and their precocious kids (from left) Gavin, Scarlett and Kendra. —DOUG KRAMER INSTAGRAM

Professional athletes are supposed to be in good trim, hardy and healthy. High school classmates describe these athletes in their yearbooks as “someone who will live to be 100 because he is fit.”

Compared to people who stay fit and treat their bodies like temples, we are lesser mortals, more prone to bad lifestyles and are likely to see the gates of heaven ahead of them.

It’s then sad and a shock to read something like the tragic story of Boston Celtics star Reggie Lewis (circa 1993) or PBA player Gilbert Bulawan’s demise this year after practicing with his Blackwater teammates.

Who would think that people like them, those used to strenuous workouts aimed at strengthening the body’s cardio muscles, would succumb to heart failure or stroke while doing those exercises?

Samboy Lim, a health buff whose gruelling physical routine made him one of the best-conditioned players during his heyday in the PBA, is still in a coma more than two years after collapsing in a basketball legends’ game.

With his brain deprived of oxygen for about 30 minutes and despite top-notch medical treatment ever since that tragic day, the man PBA fans call “Skywalker” remains in deep sleep. 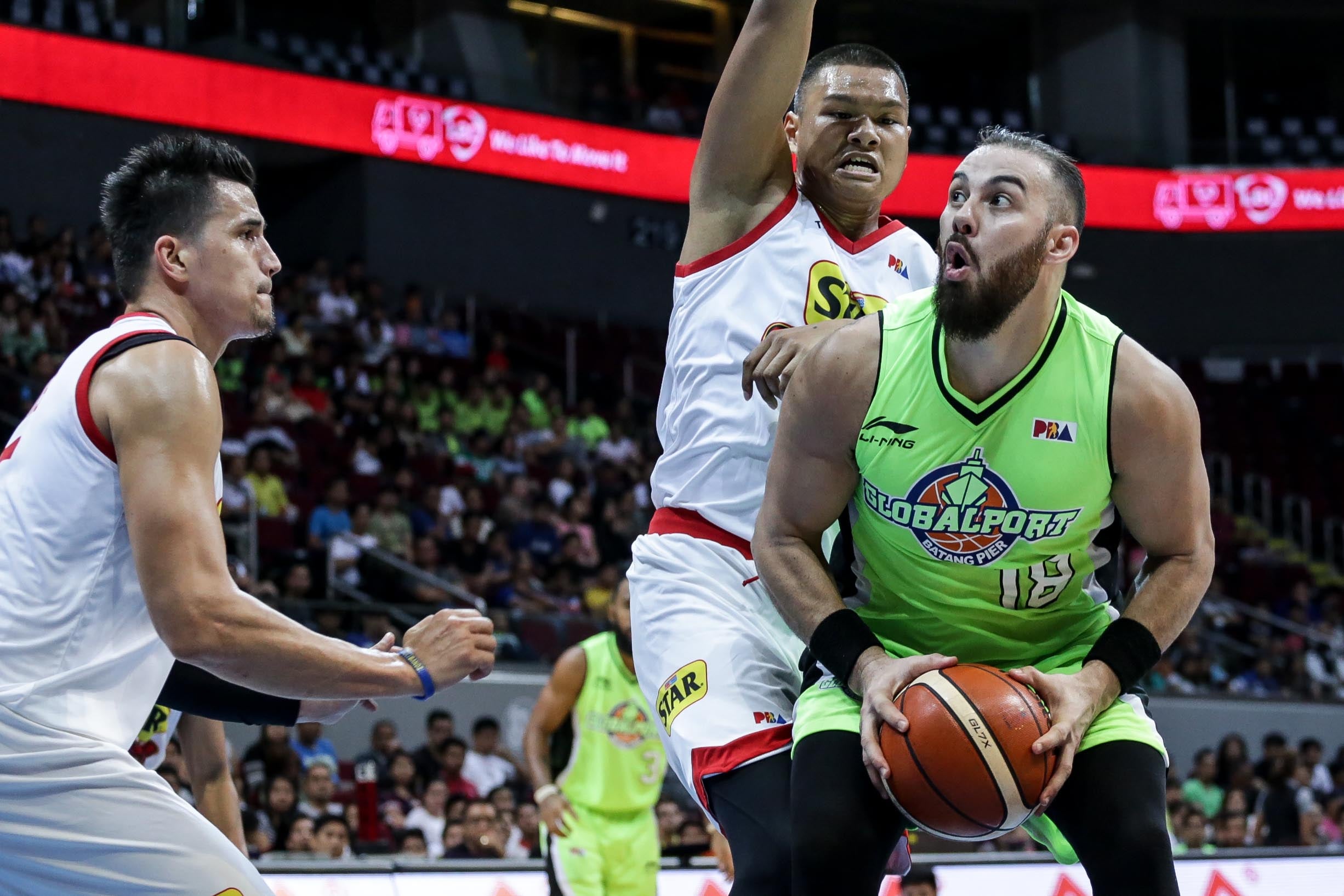 Doug Kramer in a GlobalPort jersey before moving to Phoenix at the start of the season. He went under the knife to close a hole in his heart, the cause of the clot in a vein that led to his brain.

More recently, Doug Kramer, Phoenix Petroleum’s bull of a slotman, felt “extreme dizziness” and lost his balance while doing exercise at home. Though he did not pass out, he was brought to the hospital and stayed there for six days. Doctors later said Kramer had a mild stroke.

Like Lim, Kramer keeps himself in great shape. Apart from sustaining his playing career in the PBA, he does regular exercises to stay fit—like the perfect dad to his perfect brood with former actress Cheska Garcia in several commercials [After Manny Pacquiao, Kramer has the most number of product endorsements among active Pinoy athletes].

Alas, many retired players don’t really live that clean after ending their stint in the pro hoops. Certain league superstars, including a former MVP, are known to keep late hours, frequent beer pubs and down dozens of bottles of the league’s favorite alcoholic brew. They are fortunate not to have suffered the fates of Lim and Kramer simply because of the physical regimen they adhered to during their active years in the PBA, according to a league therapist.

Kramer’s case is strange, to say the least.

“I’m a picture of health, I am a guy who takes care of my body,” says Kramer, who had had a “miniscule congenital hole” in his heart but never had a problem with it in all his years playing high school and collegiate ball with Ateneo and nine seasons in the PBA.

“I was thinking ‘How could a healthy guy like me go through something like this at such an early age.’”

Kramer says doctors concluded that the hole—“I was born with it”— was the cause of the clot in a vein leading to his brain. But why was there little or no warning signs at all?

Because somewhere along the way, while a player tries to keep himself in game shape, the very act of doing so masks the warning signs, such as sudden dizziness, numbness, confusion, trouble speaking, and blurred vision, to name a few, according to medical literature.

Bulawan, a second-string power forward, thought he was in the pink of health when disaster struck. Teammates and officials of the Blackwater organization swear they never saw anyone work as hard to stay in shape, so that when Bulawan gets the call to play long minutes, he would be able to deliver.

After one hard practice, Bulawan, whose wife is a dentist, gave teammate Reil Cervantes a brotherly hug and then collapsed, never to recover consciousness again. It turned out that Bulawan had an enlarged heart, a defect that went undetected until before he expired.

The flashy 6-foot-7 Lewis was on his way to NBA superstardom with the Celtics when he succumbed to sudden cardiac arrest during an off-season practice in July 1993. He was only 27 and at the top of his game, ready to replace the incomparable Larry Bird as Boston’s top gun and cornerstone.

American heart surgeons who attended to the cager said hypertrophic cardiomyopathy, a structural heart defect considered as the most common cause of death among young athletes, was the cause of Lewis’ death.

Grateful that advanced medical technology helped put him on the road to a quicker recovery, Kramer has issued an appeal to the Philippine Basketball Association to make players undergo the 2D Echo test to ensure that nothing is wrong with their heart before the start of each season.

The league heard his plea and was quick to act.

“The board of governors wasted no time in making this a must for all teams,” says Willie Marcial, the chief of the PBA Media Bureau. “The league agrees that this is for the safety of everyone, that’s why all board members approved the measure without hesitation.”

Kramer underwent surgery to close the hole in his heart and is expected to return to action no later than the start of the Commissioner’s Cup.

“God is really good,” Kramer says. “My doctors told me that I am improving fast. I’m not injured. I’m just resting. So early next year, I’m excited to join [Fuel Masters].”

No one really knows what the future holds. Health challenges are a fact of life that will never change, advances in medical technology notwithstanding.

In the PBA’s case, getting a medical clearance before the start of the season—no matter how fit a player looks—will certainly prevent similar things happening again.