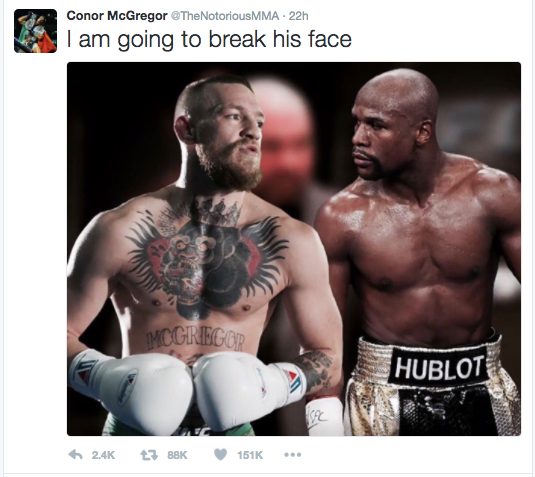 In his latest tirade against Mayweather, the Irish superstar tweeted, “I am going to break his face,” accompanied by a picture of himself wearing boxing gloves opposite Mayweather.

Earlier this month, McGregor secured a boxing license, further fueling speculations of a possible match between the two.

They have been repeatedly trading barbs over the course of the year but talks have yet to progress between the two camps.

Mayweather maintains his position as a retired boxer, but has shown inclination to returning to the ring for a possible dream match.

McGregor, meanwhile, was recently stripped of his UFC Featherweight Championship after securing the lightweight title from Eddie Alvarez at UFC 205 in November.

In a report of Fox5 in New York, UFC president Dana White said that McGregor may have his first title defense against undefeated Khabib Nurmagomedov.