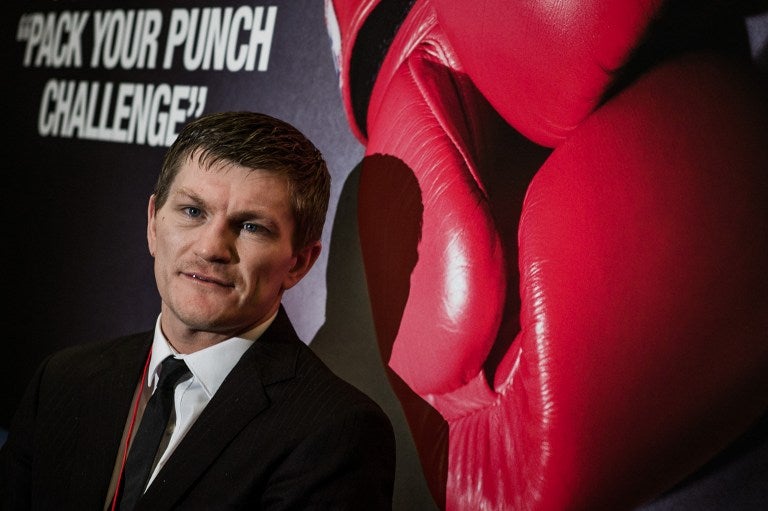 LONDON, United Kingdom — Former world champion Ricky Hatton says more needs to be done to help boxers who struggle to adapt to life outside the ring at the end of their careers.

Hatton, 38, was one of Britain’s most popular boxers, becoming world champion at light-welterweight and welterweight.

But he plunged into depression after a brutal loss to Manny Pacquiao in May 2009 and says he made attempts to take his own life “several times”.

“More should be done for boxers,” Hatton told BBC Radio 4 on Thursday.

“Footballers have an agent who looks out for them and a football club that gets behind them. Whereas boxers, it’s like once your time has gone it’s ‘On your way’ and move on to the next champion coming through.

“The thing is with boxers, we don’t come from Cambridge (University) and places like that. We come from council estates. So in boxing it’s very, very hard.

“If boxing had a professional boxing association or something like that, I think it would be a better place.

“It seems to be happening more with boxers. It’s an individual sport, so you get in the ring on your own and then when you retire you tend to spend the rest of your life on your own.”

Hatton said he had tried to make contact with the outspoken Fury — who hails, like Hatton, from Manchester — but had not received a reply.

“Tyson is a very complex person,” Hatton said. “When he said what he said, it was heartbreaking.

“Having said that, he doesn’t help himself in some interviews. If he is in a bad place and is depressed, I hope he’s speaking to the right people in order to sort it out.”

Hatton was stripped of his boxing licence in 2010 after admitting to using cocaine and retired in 2011.

He made a brief comeback in 2012 before retiring again and is now a promoter and trainer.

“I tried to kill myself several times,” said Hatton. “I used to go to the pub, come back, take the knife out and sit there in the dark, crying hysterically.” CBB

Read Next
NBA: Westbrook ejected as Thunder fall to Grizzlies
EDITORS' PICK
Climate Change Commission and Nestlé PH to discover sustainability-focused solutions
NCR’s COVID-9 alert level may be downgraded from 3 to 2 soon — DOH
What’s at stake for every fighter at ONE: NextGen
Legarda emphasizes role of ICC/IPs in nation building this IP month
Gordon calls 2 Pharmally execs ‘Senate fugitives’ after no-show in probe
Isko Moreno bares ‘two-pronged’ approach to rehabilitate MSMEs
MOST READ
Drivers with no traffic violations can now renew licenses for 10 years
LJ Reyes says Paolo Contis made ‘no efforts’ to talk to her after their split
Yang’s Princeton degree raises eyebrows among senators
Gordon to Duterte: You? Teaching me courtesy?
Don't miss out on the latest news and information.