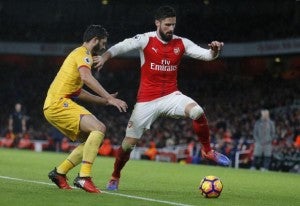 LONDON (AP) — With Alexis Sanchez’s cross floating into the penalty area behind him, Olivier Giroud only had one choice: A back-heeled overhead flick.

“I was a bit lucky but it was the only thing I could do,” Giroud said. “The ball was behind me and I tried to hit it with a back heel.”

The ball hit the underside of the crossbar, came down and went over the line to produce one of the most exceptional goals witnessed by Arsenal manager Arsene Wenger.

“That could be remembered as the ‘Giroud goal’ that nobody forgets,” Wenger said after Arsenal’s 2-0 victory over Crystal Palace in the English Premier League.

Giroud’s previous touch before the “scorpion strike” was also a back-heeled flick — the fourth touch in a flowing move launched by Arsenal inside its own half. Giroud squared to Granit Xhaka, who released Alex Iwobi to continue the advance before threading the ball through to Sanchez. Giroud then completed the counterattack in an exquisite manner in the 18th minute.

“It was an exceptional goal because it was at the end of a fantastic collective movement which our game is about,” Wenger said. “After that it was a reflex. Any goal scorer is ready to take any part of his body to score a goal.”

And when such a goal is executed so perfectly, it can light up a stadium — even on a rainy, freezing day.

Inevitably it overshadowed Iwobi’s 56th-minute header which enabled the hosts to relax against a Palace side one place above the relegation zone.

Harry Kane and Dele Alli both scored twice as Tottenham won a fourth consecutive match ahead of Wednesday’s game against Chelsea.

“Chelsea arrive in very good shape – us too after the last few games,” Tottenham manager Mauricio Pochettino said. “It will be a very tough game and a great opportunity for us to try to stop them and try to reduce the gap.

“It’s important, I think it’s important for us and for the Premier League to try to win and try to stop them and reduce the gap.”

Kane has now scored 59 goals in 100 league games, while Alli has 18 from 51 games. Younes Kaboul scored the stoppage-time consolation for Watford.

In the packed festive program, 12 teams who played on Friday or Saturday are back in action on Monday.