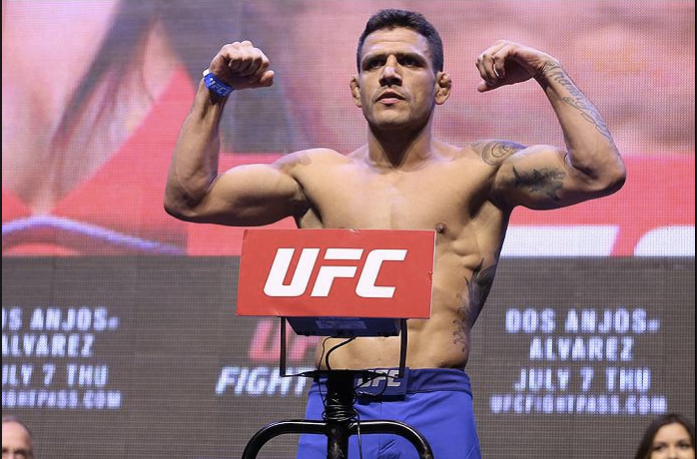 The 32-year-old took to Twitter over the weekend to announce his intent to move on from the 155-pound weight class and start competing with the bigger guys at 170.

RDA (25-9) has been a staple of the promotion’s lightweight division since 2008 and has racked up 14 wins over the course of his UFC career.

Deemed at first as an ‘average fighter’, the Brazilian jiu-jitsu black belt experienced a career resurgence after refining his striking repertoire and developing into one of the most complete fighters in MMA today.

At one point, Dos Anjos was on a stellar 10-1 run which featured impressive victories over contenders like Donald Cerrone, Nate Diaz and Benson Henderson, which culminated into a UFC championship after wrecking Anthony Pettis in dominating fashion.

He also managed to defend his belt against a streaking Cerrone, by knocking him out in less than a round.

However, his meteoric rise was soon stifled after back-to-back setbacks against Eddie Alvarez and Tony Ferguson in July and November, respectively.

Shortly after losing the belt, RDA left his longtime camp, Kings MMA, and is currently looking to start his own gym.

Despite his recent struggles, Dos Anjos believes he’s just starting to tap into his potential and would once again be the best at his new division.

“It hasn’t been easy to make the weight and now I want to fight with my best and reach the top of the welterweight division,” he was quoted as saying in a MMAFighting report.  “Making weight happy in 2017, being happy while getting a fight booked will make a big difference.”

The Rio de Janeiro-native also claimed that he’s not closing the door on a potential return to lightweight, if the situation calls for it.

“And about going back to lightweight again, only for a super fight and big money,” Dos Anjos said. Khristian Ibarrola