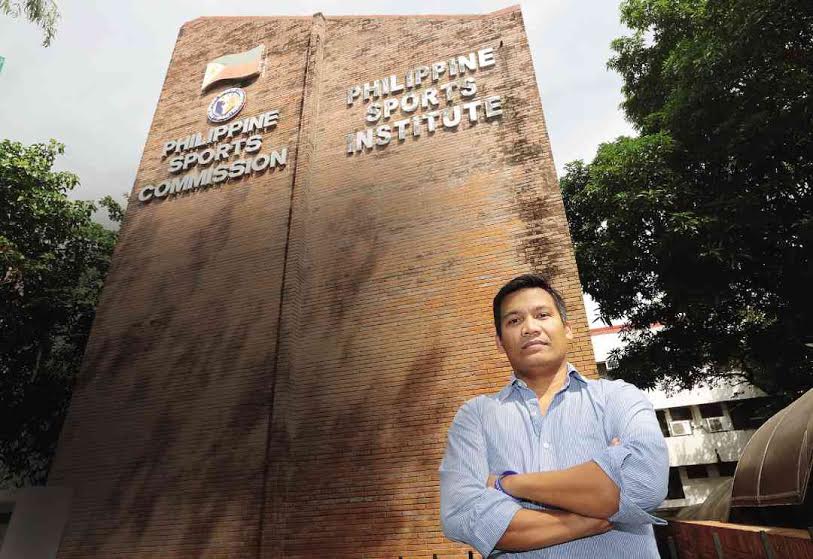 Marc Velasco, the founding director of the Philippine Sports Institute, says that with proper training and scientific aids, the Filipino athlete can match up with the Caucasians and the Africans. Grig Montegrande/INQUIRER

His methods may not be new but they are seen hereabouts as often as snow in the dry season.

To determine how Filipino athletes can best compete against the world’s best, Marc Edward Velasco plans to extract blood samples and have sports scientists analyze them for intervention purposes.

He also wants MRI (magnetic resonance imaging) and other machines to analyze an athlete’s performance through mathematical modeling, computer simulation and measurement.

Welcome to an athletes’ laboratory, where Filipino sports supermen will now be molded and guided. Now all these are geared for one purpose: To give the country’s athletes an edge in the international arena. A long-awaited Olympic gold medal perhaps?

Velasco’s vision didn’t exactly come out of the blue. He was totally focused on monitoring the progress of the powerhouse Hong Kong rugby team when he got an intriguing call from the Philippines: Could he drop everything and come back home to help his country’s athletes instead?

One thing led to another and before he knew it, Velasco had agreed to head the fledgling PSI. Never mind that the high-performance coach for Hong Kong’s top athletes had to uproot his family from the affluent Chinese territory and settle for a lower salary in Manila.

The training supervisor of 2012 London Olympics bronze medalist and keirin cycling specialist Lee Wai-sze knew exactly where to start. His is no ordinary job. It’s a challenge to change the character of an entire generation of Filipino athletes in a drastic effort to make them consistently competitive on the global sporting scene.

“The vision [of the PSI] is clear,” says Velasco, whose outfit is a flagship project of Philippine Sports Commission Chair William “Butch” Ramirez. “Our ultimate goal is to have a sustainable grassroots program to fuel our elite program. This will be the biggest purpose that the PSI will serve.”

With 14 years of experience in the field of sports science and biomechanics, Velasco is building the institute from the ground up at the Philsports Complex in Pasig City with the help of deputy director Dr. Henry Daut and a core group of sports scientists, coaches, medical practitioners, trainers and coordinators.

Until the PSI’s formation last week, the Philippines was one of the few countries in Asia that didn’t have a sports institute, which Ramirez says is the missing link in its bid to attain continuing success in the international arena.

With Velasco at the helm, the PSI will have a three-pronged strategy beginning with grassroots sports development and the identification of talented athletes. The second phase focuses on the high-performance training of elite athletes using a scientific approach, just like what the world’s sports superpowers have been doing.

Complementing these two structural programs is sports education in which the institute will create an academy for scientific research and the education of the athletes in cooperation with the local government units and the Department of Education.

The PSI has forged links with regional training centers in Davao del Norte, Pagadian City, Tacloban, Cebu City, Ilocos Norte, Naga City, Legazpi City and Pili, Albay. A team of 15 monitors along with 60 coordinators will be sent across the country to provide technical support to the LGUs, which are at the forefront of discovering athletic talents.

Velasco is pushing for a strength and conditioning program for the elite athletes and the acquisition of high-tech biomechanics and sports science equipment for medical diagnostic purposes.

“Biomechanics will analyze the movements of our athletes and correct mistakes,” says Velasco, the former head of the strength and conditioning unit of the Philippine Center for Sports Medicine (PCSM). “We used to rely on the forms of the Caucasians and the Africans but the demands of our race are different. I’m not saying that Asians like us are inferior, but we’re not as tall as the Caucasians and not as muscular as our African counterparts.”

The PSI also plans to extract blood samples from the athletes for analysis. “It’s just a complete blood sample and [the tests are] being practiced all over the world,” Velasco says. “With the diagnostic data based on the blood samples, we will identify the next steps to improve an athlete’s performance.”

With a monthly budget of P25 million plus a P50-million annual grant for equipment acquisitions from the PSC, the PSI will hire an 80-strong team of sports psychologists, medical doctors, orthopedic doctors, physiologists, physiotherapists and alternative medicine practitioners.

“I have complete confidence in Marc that the PSI will achieve its goals in sports science,” says Ramirez, the man who called Velasco back from Hong Kong. “He is the best man for the job of bringing the Filipino back to world-caliber status.”

Velasco’s reputation precedes him in the realm of sports science. He was pirated from the PCSM by the Hong Kong Institute of Sports in 2008 to handle the strength and conditioning programs of its teams in swimming, bowling, cycling, athletics and the differently abled. He spent his last 10 months there as the training supervisor of the HK rugby squad, Asia’s second best after Japan.

Lee, Hong Kong’s first-ever Olympic medalist in cycling, is Velasco’s finest ward. Already a double gold medalist in the Asian Games (2010 Guangzhou and 2014 Incheon), she won the bronze in the London Olympics and several medals in the UCI World Championships.

“We spent six years training [Lee],” Velasco says. “It’s a long, tedious process, but that’s how other countries create world-class athletes. We want to duplicate that process here with the PSI.”

Asked when the PSI will see the first big fruit of its labor, Velasco says the Filipino athlete can reach optimum strength in 2024. That’s the next Olympic quadrennial after Tokyo 2020.