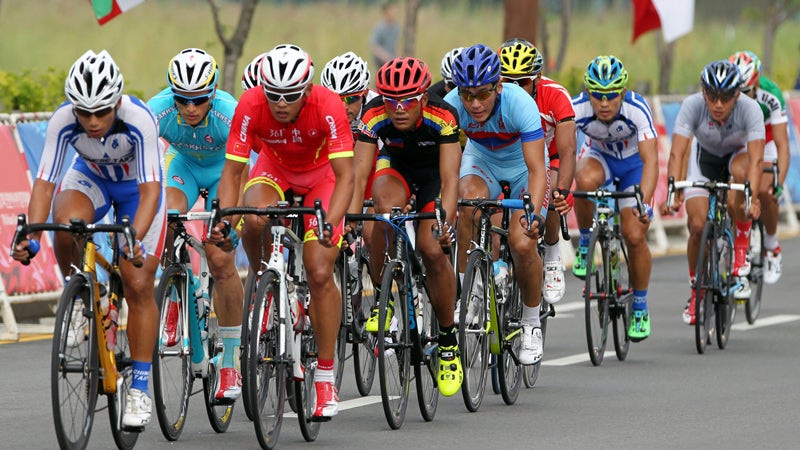 Mark Galedo (in black jersey) rides with themain pack in the road race. His team will race with Chris Froome’ and his Team Sky in the Australian bikathon. NIÑO JESUS ORBETA

Galedo and his teammates in 7 Eleven Sava-Road Bike Philippines will race with Froome and the best cyclists in the world in the five-stage bikathon set to begin Wednesday in Melbourne.

“This will be our toughest race as a team,’’ said Galedo in Filipino.

“But we don’t want to pressure ourselves. Our goal is to gauge our strength in climbing against Team Sky and the world-class cyclists out there,’’ added the three-time Tour champion in the local cycling scene.

Froome, a superior climber who ruled last year’s Tour de France, will ride with his British professional squad Team Sky, which dominated the past four editions of the world’s grandest cycling race.

Coach Ric Rodriguez will map out the race strategy of the team along with cycling patron and team manager Bong Sual.

They are bound to pedal the punishing climbs of Falls Creek and ride through Beechworth, Benalla and into Mitchelton Winery before completing the Kinglake circuit on Sunday against 14 other professional teams from Europe, New Zealand and Australia.

Johan Esteban Chaves of UCI Pro Team Orica-Scott will also vie for the general classification title after the Columbian pro rider placed second in the Giro Italia and third in the Vuelta Espana, two of the three grand tours with Tour de France, last year.

After the race in Australia, Galedo and his 7 Eleven Sava-RBP teammates are scheduled to race in the Le Tour de Filipinas for Feb. 18-22 against 13 other continental teams in the UCI-sanctioned 2.2 category race.