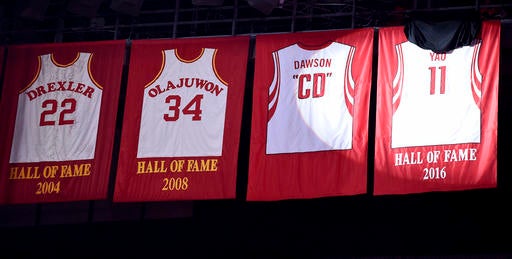 Retired Houston Rockets center Yao Ming’s retired jersey number is revealed in the rafters at halftime of an NBA basketball game between the Rockets and the Chicago Bulls, Friday, Feb. 3, 2017, in Houston. AP Photo

Yao was the first overall draft selection in 2002 and the first player drafted number one who didn’t play collegiately in the United States.

The 7-foot-6 (2.29m) Chinese giant averaged 19.2 points and nine rebounds for the Rockets and became a global ambassador for the sport during his eight NBA seasons.

He continued promoting the game after he was forced into retirement in 2011 by repeated foot injuries.

On Friday his number 11 was raised to the rafters alongside those of Clyde Drexler (22), Moses Malone (24), Calvin Murphy (23), Hakeem Olajuwon (34) and Rudy Tomjanovich.

READ: Number 11 strikes a cord with both Yi and Yao

“I remember the first time I watched (an) NBA game, randomly saw a shot the cameras gave on those retired jerseys,” Yao said. “After I read stories, I know that (is) the highest honor a player can reach for himself and an accomplishment for the team. Today I think I’ll always ask myself what is the story behind it. Retired Houston Rockets center Yao Ming speaks during his jersey number retirement ceremony at halftime of an NBA basketball game between the Rockets and the Chicago Bulls, Friday, Feb. 3, 2017, in Houston. AP Photo

The Rockets were up 60-49 at halftime, but they had to put in extra time to make sure the celebratory night didn’t end with a deflating defeat.

James Harden scored 42 points, including the deciding free throws in the final 36 seconds of overtime.

Michael Carter-Williams’ layup with 2:19 to play in the extra session had brought Chicago back within 115-113, and he knotted the score when he grabbed the rebound after his own missed free throw and drained a jump shot.

Harden then converted one of two free-throw attempts to push the Rockets back in front at 116-115, but Dwyane Wade’s turnaround jump shot with 1:28 to go saw the Bulls edge ahead.

Harden responded with a contested jump shot. He was fouled on the play and made the free throw also, and after Chicago came up empty on their next possession Harden made another brace of free throws to make it 121-117.

Harden also grabbed 12 rebounds and handed out nine assists for the Rockets, who got 21 points off the bench from Eric Gordon.

The Bulls were led by Carter-Williams’ 23 points, while Taj Gibson added 20 and Wade chipped in 19.

Brook Lopez pulled down 11 rebounds for the Bulls, who were without Jimmy Butler because of a right heel contusion.

The Bulls came out firing in the third, using a 14-4 scoring run to narrow the gap and eventually take a slim lead into the fourth.

Harden’s step-back jumper tied the score at 108-108 with 27.3 left in regulation, but he was unable to make another at the buzzer.