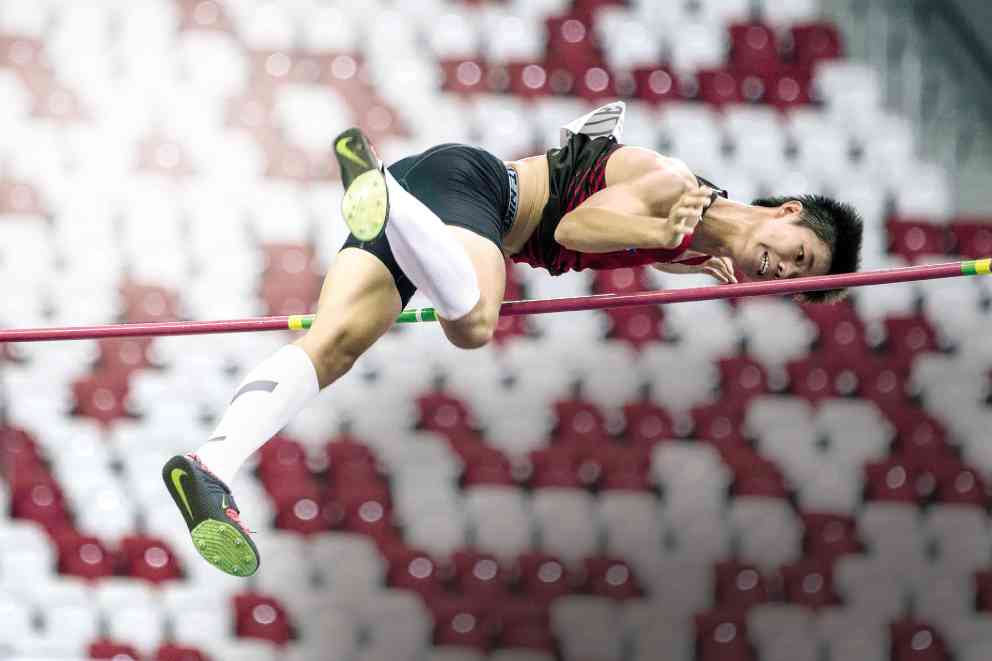 EJ Obiena has broken the national record 14 times and, at 21, looks very capable of raising the bar well beyond the 5.55 meters he achieved in a recent athletics meet in Singapore (photo).

Back in the 1990s, a young Ernest John “EJ” Obiena would happily tag along with his father, the national pole vaulter Emerson, during training at Rizal Memorial Sports Complex in Manila. After helping carry the 17-foot pole to the end of the runway, EJ would be tossed to the landing cushion by his dad.

“I remember the first time I did it to him,” says Emerson in Filipino. “He enjoyed [the sensation of landing on the cushion] very much and he would ask me to do it again and again. He wouldn’t stop, he really loved being tossed that way.”

That began EJ’s fascination with the sport in which he has become its top dog not only in the Philippines but in Southeast Asia as well.

“There is something in pole vault that I really love,” says the 21-year-old EJ, who used to compete in the 100- and 400-meter hurdles in high school at Chiang Kai Shek College. “Definitely, it’s a crowd pleaser.”

He feels a rush of adrenaline sprinting down the runway, planting the pole on the ground, and soaring to clear the bar. “I feel a kind of high doing it, the runup, the hang time. I enjoy doing it every step of the way,” he confides.

The only Filipino athlete—perhaps in the whole of Southeast Asia—to break a track and field national record 14 times, EJ boasts a personal best of 5.55 meters which he set in last year’s 78th Singapore Open Championships.

EJ’s prolific achievements are not lost on Philip Ella Juico, the president of the Philippine Amateur Track and Field Association (Patafa), who has approved a training schedule that would prepare the vaulter for stints in this year’s Southeast Asian Games and well into the 2020 Tokyo Olympics.

“He’s a very promising athlete,” says Juico of the 6-foot-2 EJ, who competes for University of Santo Tomas in the UAAP. “He’s young and strong. And he has the proper support group, having been born to a very athletic family.”

The elder Obiena won a silver medal in the 1995 SEA Games in Chiang Mai, Thailand, finishing second to coountryman Edward Lasquete. Emerson’s wife, Jeanette, used to compete in the hurdles for Centro Escolar University while their other child, Emily Jean, now 18, competes for UST in pole vault alongside EJ.

“We are keeping our fingers crossed [that he’ll do good in the sport] because that’s what he wants even as a young boy,” says Jeanette of her son, who settled for the silver medal in the previous SEA Games in Singapore before coming back to the Lion City to surpass the region’s high-water mark with a 5.55m effort a few months later.

That feat convinced Patafa into sending EJ to Formia, Italy, to train in the World Pole Vault Center under Vitaly Petrov, the coach of Ukrainian six-time world champion Sergey Bubka. Bubka, who broke the world record 35 times, came to Manila to invite EJ to the camp, along with his father who also acted as Petrov’s substitute mentor.

“I was there to receive [Bubka and Petrov’s] instructions and then after the training, we went back home to continue EJ’s training program,” says Emerson. “While training EJ, I also managed to upgrade my coaching level.”

EJ admits, though, that his meterioric rise has its drawbacks.

“Other guys my age get to socialize,” says EJ. “From school, they get to hang out with friends. Me, after school, it’s straight to the [track and field] oval. But it’s not something that I regret because I’m very focused on my goal. I want to be the best that I can be.”

Emerson says they are not keeping their guard down in the next SEA Games in Kuala Lumpur this year, even though the Thai champion who beat EJ in the 2015 edition—Porranot Purahong, who cleared 5.30m—has already retired.

“We are always prepared because we know the opponents like those from Thailand can pull off surprises,” says Emerson. “EJ is making big improvements, but we always keep in mind that the other countries are working just as hard.”

For EJ, being the top vaulter in the region is not enough.

“I have seen the best in the sport,” he says. “I may be good in Southeast Asia but I’m just an average vaulter compared to the athletes from the United States, France and Russia,” he says. “My end-goal is to compete toe to toe with them.”

And for that, EJ knows he need to keep raising the bar.