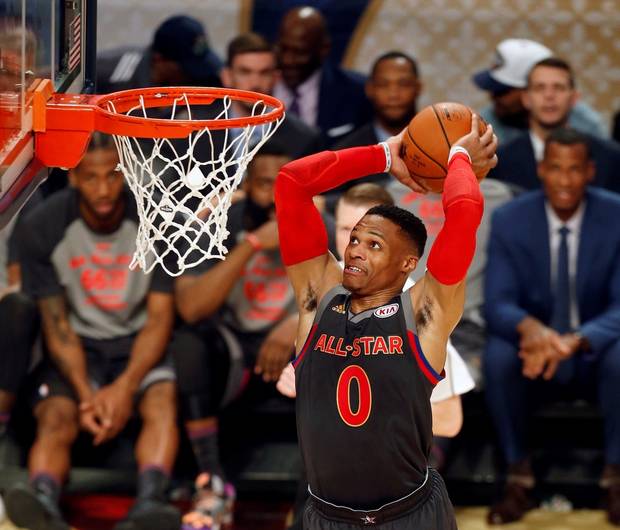 NEW ORLEANS — Russell Westbrook and Kevin Durant played together for only 81 seconds in the All-Star Game, just one very early stint.

It was enough for a signature highlight.

A give-and-go — Westbrook to Durant, back to Westbrook for a dunk, rekindling their Oklahoma City magic for a moment — was the one of the most ballyhooed moments of Sunday night’s showcase in New Orleans. The Western Conference bench broke into celebration, replete with Stephen Curry even tossing a cup of ice water into a timeout huddle, though Westbrook tried to downplay it all afterward.

“Yeah, he threw a lob,” Westbrook said. “That’s all that happened. Just threw a lob. It’s basketball. That’s it.”

That wasn’t it, of course.

The Durant-Westbrook story line was huge coming into the All-Star Game, which the West won 192-182. The tale is well known: Durant left Oklahoma City for Golden State last summer, and the relationship between the former Thunder teammates has either been frosty or nonexistent since, depending on which perspective one wants to believe.

Golden State is 3-0 against Oklahoma City this season, so it’s not like Durant and Westbrook haven’t been around each other. But Sunday night marked the first time they shared an in-game huddle since last spring, when the Thunder season — and the Durant era — ended with a loss to Golden State in the West finals.

“It was a great basketball play,” Durant said. “He was open so I threw him the lob. He can jump really high so yeah, good play.”

At the time, no one knew it would be overshadowed later by Anthony Davis setting an All-Star record with 52 points — and then again when word came postgame that Sacramento is sending All-Star center DeMarcus Cousins to the Pelicans.

Cousins played only two minutes, which made the trade potential quite obvious. But Western Conference coach Steve Kerr insisted that was planned because Cousins wasn’t physically feeling his best.

“He said, ‘I’m pretty banged up, and I really don’t want to play much,'” Kerr said, detailing a conversation he said he had with Cousins on Saturday. “Just give me a few minutes, and that’s plenty.”