There’s a new queen this week.

Jaja Santiago had 13 points in the match, a far cry from her 21-point average from a week ago, and she registered just one kill block and that doesn’t make for a strong argument for making this week’s list.

1. Diana Carlos (University of the Philippines, opposite hitter)
Last week: No. 7
Weeks on list: 2 This is the week of the State University.

The Lady Maroons are the only undefeated after three weeks of competition in the UAAP Season 79 women’s volleyball tournament and it’s thanks to no small part from Diana Carlos.

Carlos is the Lady Maroons’ leading scorer and no.4 overall with an average of 14.5 points this season.

Santiago’s terrible outing this week was also factored in why Carlos is the top player but this doesn’t discount the fact that Carlos has been unleashed this season.

2. Nicole Tiamzon (University of the Philippines, outside hitter)
Weeks on this list: 1 UP played two games this week and both ended up in wins for the lasses from Diliman.

Their win against La Salle was the first since 2008 and that game’s magnitude alone managed to catapult Tiamzon to the no.2 spot despite being her first time in the list.

The fifth year player had 16 points to lead the Lady Maroons in vanquishing their 16-game losing streak against the Lady Spikers. Uncertainty filled the air but the returning Mich Morente helped to slowly calm the winds for Ateneo.

After she was left out of the Ateneo roster for Season 78 due to academic issues, Morente has been key in helping the Lady Eagles fill the void Valdez left.

Of course, it takes almost a whole team to fill Valdez’ absence, but Morente has been a major factor in Ateneo’s 3-1 record.

Morente is Ateneo’s second-leading scorer averaging 12 points a game this season but it’s also her veteran leadership that helps her inclusion in this list. Fortunately for her, she and the Lady Spikers bounced back in emphatic fashion and shot down the Lady Bulldogs on Sunday, 29-27, 25-16, 25-21, to get back to winning ways and improve to 3-1.

La Salle has been a very balanced offensive unit but Dy is the Lady Spikers’ most consistent scorer with a team-best 11.25 points a game.

Dy was perfectly fine playing the support role to teammates Tin Tiamzon and Aduke Ogunsanya, who had 17 and 11 points, respectively, in their win against NU but she’s on speed dial when La Salle needs saving. Those numbers can say it was an easy win for the Lady Eagle,  but it was a virtual dogfight in the first two sets before Jia Morado willed Ateneo in a dominant final set.

She could’ve had more but assistant coach Sherwin Meneses decided to rest her for the final points of the match but even with her early exit, she remains the top setter in the league with an average of 12.07 excellent set per set.

6. Ayel Estrañero (University of the Philippines, setter)
Last week: No. 4
Weeks on list: 2 UP’s surprising dominance in the league begins with its setter Ayel Estrañero.

The Lady Maroons have a plethora of capable scorers with Tiamzon, Kathy Bersola, Carlos, and Isa Molde just to name a few.

And it takes a former scorer to have that unique perspective on how hitters think, giving Estrañero an edge.

Estrañero is averaging 10.38 excellent sets per period, the fourth best behind Ateneo’s Morado, La Salle’s Kim Fajardo, and NU’s Jasmine Nabor, who was the no.3 player in last week’s list.

She may be behind in numbers but Estrañero got the nod over Fajardo and Nabor due to UP’s 4-0 record. 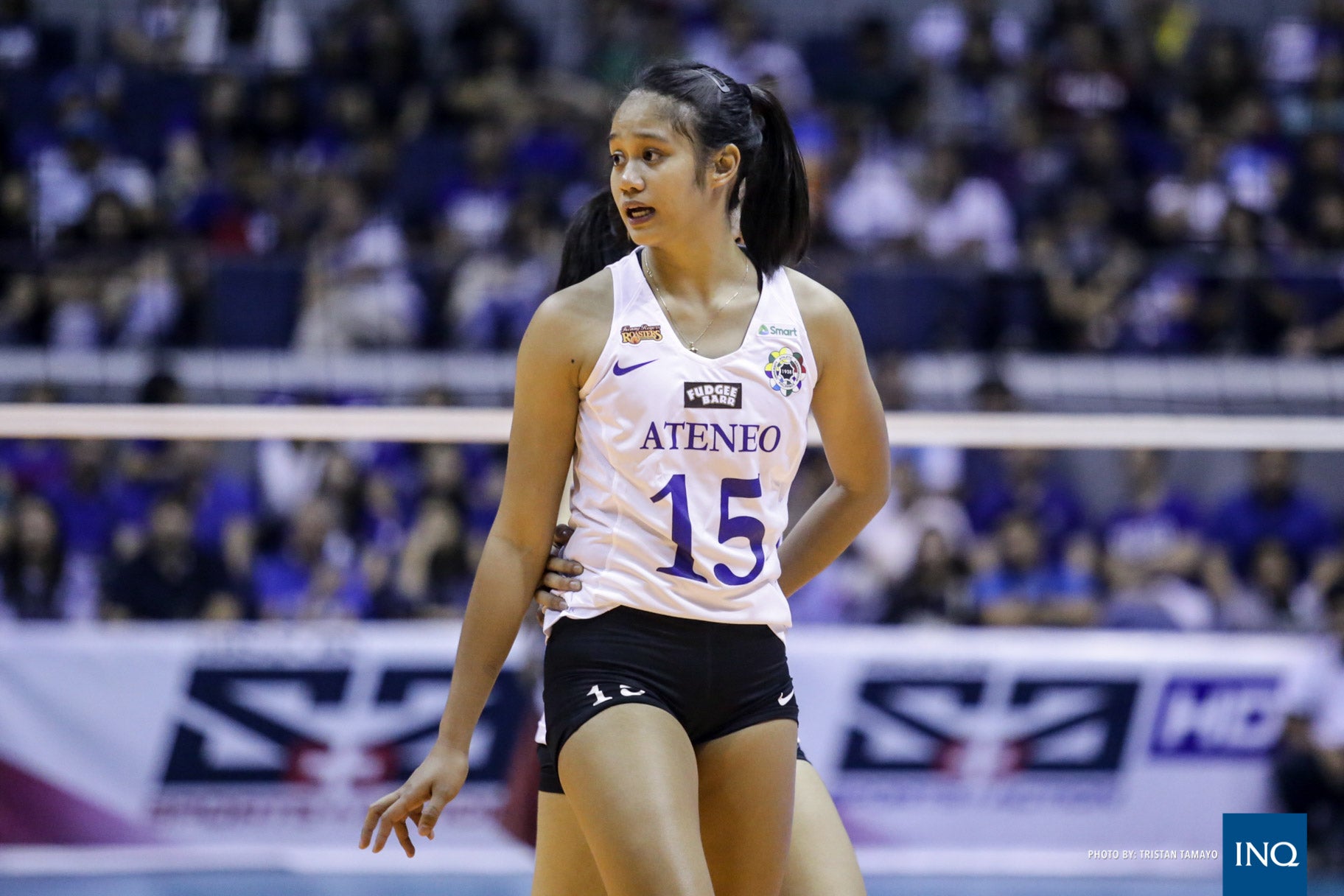 Morado usually has two targets this season if she wants Ateneo to end a rally, one is Morente and the other one is Jhoana Maraguinot.

Maraguinot has stepped out of the shadow of Valdez, and is now the leading scorer for Ateneo with 12.25 points a game and that mark puts her as the fifth-best in the league.

She’s converting on a relatively decent mark of 36 percent from her attempts while Morente is at a slightly better 37.50 percent.