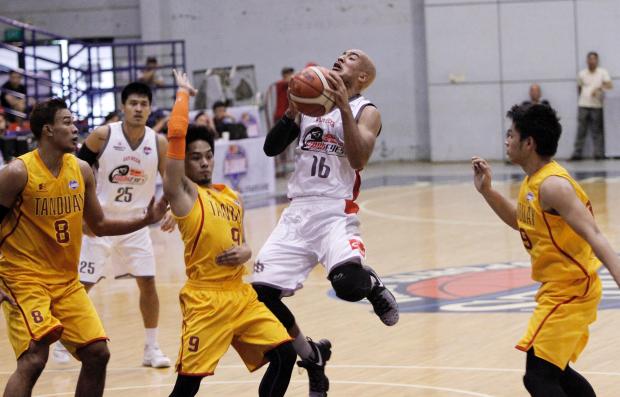 Davon Potts tries to score against three Tanduay defenders in Thursday’s game. (Photo from the PBA)

Cignal-San Beda bucked a poor start and dealt Tanduay with an 85-71 beatdown Thursday in the 2017 PBA D-League Aspirants’ Cup at Ynares Sports Arena in Pasig.

The Hawkeyes recovered from a 17-4 deficit to start the game before slowly chipping away the lead and ultimately zooming ahead, 54-48, at the end of the third frame.

“Again, it’s credit to the boys,” coach Boyet Fernandez said. “They stepped up our game. We started bad, but it was our second group, the San Beda boys, who really stepped up.”

Robert Bolick scattered 23 points, three rebounds, and three assists to lead Cignal, while Pamboy Raymundo had 13 markers in the win.

Javee Mocon also got 10 points, five boards, and two assists for the Hawkeyes, which helped them rack up their fifth straight win.

“We’re happy that we got this win,” Fernandez said. “We really wanted to win this to help us in our positioning at the end of the eliminations. We gave ourselves a chance to close in to that top two.”

Cignal remained tied with Cafe France at 5-1 and is still on the hunt for that automatic semifinal slots.