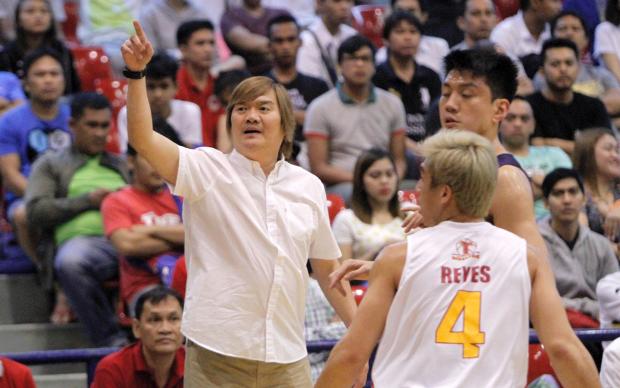 Frustrated with how Tanduay dropped its last two outings, coach Lawrence Chongson aired his doubts on the capability of his squad to compete this 2017 PBA D-League Aspirants’ Cup.

“Maybe I don’t have the personnel,” he said on Thursday. “At first when I formed the team, I thought this team will be good enough. Phoenix is gone, Racal has overhauled with a new coach, and coach Boyet (Fernandez) has just returned with Cignal. But maybe I was wrong and maybe, I was caught with picking players who were ex-pros and veterans. I thought I had the materials and I had the weapons, but then, after three losses to the big guns, we seem like we’re a little bit short.”

All of the three Tanduay losses came at the hands of the league’s top teams, losing its season-opener to Cafe France, 83-67, before falling to Racal, 84-80, last week and to Cignal, 85-71, on Thursday.

Chongson didn’t hide his disappointment with his players whom he thought would step up in this conference, especially the ex-pros and the rookies who came in to his side as highly-touted free agents.

“Maybe, I was really caught by the moment,” he said. “A number of them were used on the college-type of games, but it’s different here. We seemed like we were taken out of our comfort zone.”

At 3-3, the Rhum Masters no longer have a chance to snag one of those top two spots, and Chongson is now shifting his sights to the next best thing: the three and four-seeds which come with a twice-to-beat edge in the quarterfinals.

But he’s not resting on his laurels, as Tanduay will now re-assess the team in preparation for the final three games of the eliminations and for the playoffs, hinting at a possible roster revamp.

“I think we should tinker (with our lineup), but then, I still have nobody in mind,” he said. “I haven’t thought yet of a fool-proof change. What this players have right now is that we’re together for two months. There’s still some chemistry issues, but if we change some players, we’re going back to zero, unless you’re getting a Calvin (Abueva) or June Mar (Fajardo).”

Still, Chongson is keeping his faith that, from now up until the end of the eliminations, he will come up with the right moves to solve Tanduay’s problems and make a spirited run to the playoffs.

“Hopefully by then, we get a bit of momentum,” he said. “We’re not taking our next opponents lightly. Hopefully, we can build some momentum and chemistry in our three games in our practices. I have something in my mind going into the playoffs, but I’d rather keep it to my chest for now.”

Tanduay will now take an 11-day break before facing off against Batangas on March 6. /atm