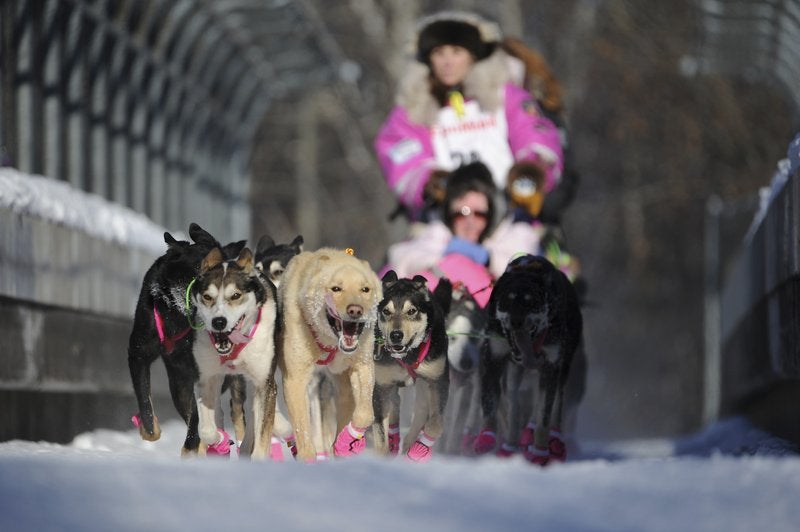 ANCHORAGE, Alaska — The sound of howling dogs filled downtown Anchorage on Saturday as mushers from around the world gathered for the ceremonial start of the Iditarod Trail Sled Dog Race.

About 2,000 dogs belonging to 72 mushers waited their turn — some more patiently and less vocally than others — to hit the trail this year. The race spans nearly 1,000 miles of Alaska wilderness, including the last stretch when the teams battle the frozen Bering Sea coast en route to the finish line in the community of Nome.

The ceremonial start is a fan-friendly event designed to show off mushing to fans in Alaska’s largest city. Spectators pet the dogs, mingled with mushers and even grabbed an autograph or two.

Racers then left the downtown area every two minutes in a staggered start with an Iditarider — people who won auctions for a prime spot in a competitor’s sled — for an 11-mile course on city trails and streets.

Carol Stedman, a retired postal worker from Alexandria, Virginia, was an Iditarider for the fifth time since 2011. That was the first time she came to Anchorage to watch the start of the race.

She said after that initial experience, she crossed the Iditarod off her bucket list and put it on her to-do list.

“You’re in the sled, you see everything going on, it’s like a big party all the way out of town,” she said Saturday morning while wearing a stocking cap fashioned like a Husky dog.

“Seeing the interaction between the mushers and the dogs is just spectacular,” she said. “Everybody should do it once.”

Amanda Gourley of Sacramento, California, had business in Alaska, and decided to stick around to see her first-ever Iditarod.

“I remember as a little girl watching the Iditarod on ‘Wide World of Sports,’ and it’s just one of those things I’ve always wanted to see,” she said. “I love dogs.”

City crews trucked in snow overnight to make the streets ready for the dog sleds.

Anchorage had more than enough snow to stage the ceremonial start. But just a few hundred miles north, the Alaska Range — a mountain span that includes Denali — has little snow and open-water conditions.

That has prompted race officials to move the competition’s official start from the Anchorage area, over the mountain range to Fairbanks to avoid the dodgy spots. It’s the second time in the past three years, and third in the past 14, that the race has had to move to Fairbanks to find suitable winter conditions to start.

But there is good news for mushers and dogs making the journey to Nome.

“There’s lots of snow on the trail,” race marshal Mark Nordman said after surveying the route late last week. “Lots of deep snow. And when we’re on the (Yukon) river, it’s a freeway.”

The official start of the race is Monday.

Dallas Seavey, who turned 30 on Saturday, has won four of the last five Iditarods. He could join Rick Swenson as the race’s only five-time winners.

Five other mushers have four wins, but no one in the past quarter-century has captured the elusive fifth title.

A rule change this year will allow mushers to carry satellite or cellphones for the first time ever. The change was prompted after a drunken man on a snowmobile last year charged at two teams in separate attacks, killing one dog and injuring others.