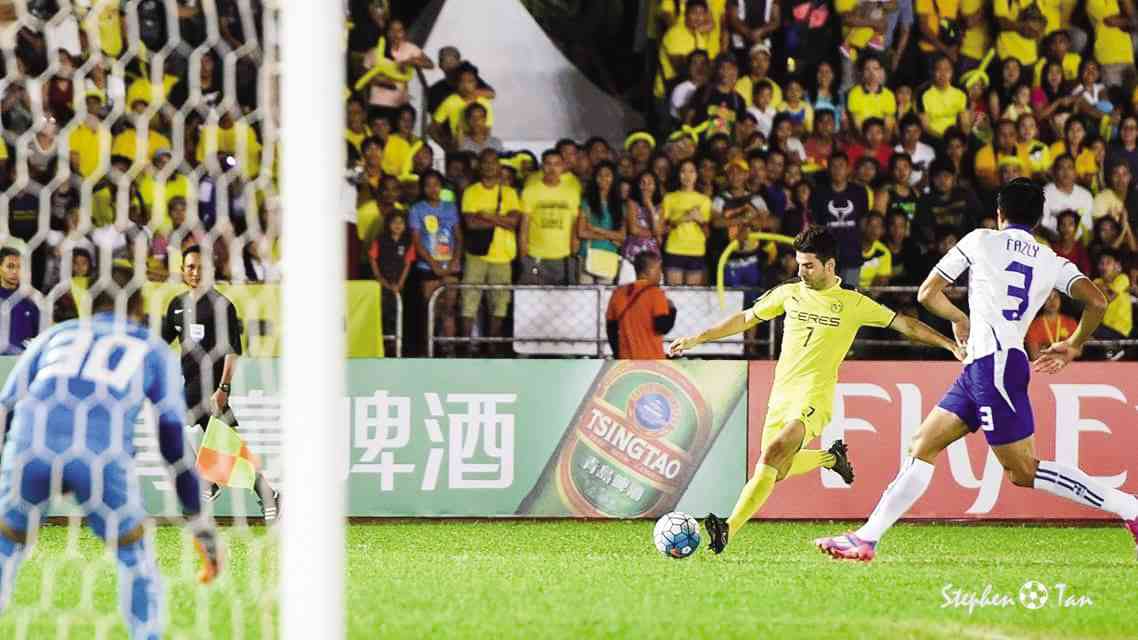 A standing-room-only crowd watches Ceres-Negros’ recent match against Malaysia’s Felda United in the AFC Cup. No other place in the country packs as many football fans as Bacolod’s Panaad stadium. —CONTRIBUTED PHOTO / STEPHEN TAN

BACOLOD CITY—Talk of football’s declining popularity in the Philippines may turn out to be an exaggeration, after all.

One only needs to visit Bacolod when Negros Occidental’s hometown club, Ceres-Negros, plays at Panaad Stadium to validate the claim that this city known for its Chicken Inasal and sweet delicacies has become the epicenter of the Beautiful Game in the country, dislodging neighboring Iloilo.

Negros has been a rich source of talent for the national team in previous decades, a strong indication that the love for the sport runs deep in this part of the country. But the fandom was raised to a whole new level in the past two weeks when Ceres hosted a pair of top Southeast Asian clubs, Tampines Rovers of Singapore and Felda United of Malaysia, in the AFC Cup.

“It’s really here where we see real fanatics and people who live for football, the kind you can compare with other places in Southeast Asia,” says Ceres and Philippine Azkals standout Patrick Reichelt, who has been with the club since 2014 after a short stint in Thailand.

“Everybody loves football here. I don’t think it’s the same in Manila or in other places [in the Philippines].”

The turnout during the Busmen’s recent games was the clearest sign of the sport’s grip on the Negrenses’ heart—a far cry from the disappointing attendance in league matches in Manila, as well as the AFF Suzuki Cup hosting late last year at Philippine Sports Stadium in Bulacan.

From the roadside banners along the highway from the airport, to the posters in the streets of the city’s major thoroughfares and to the giant billboards with the players’ faces plastered in the stadium, the club has ensured that the importance of the AFC Cup matches are amplified.

“Everyone knows there is a game on, everyone knows who the players are,” says winger Iain Ramsay, who was signed by the club at the start of the season.

Ricky Yanson, president of the Negros Occidental Football Association, (Nofa) says the revitalization of the grassroots programs also strengthens the fan base of the sport in the province.

“Grassroots programs are a huge factor to increase the fan base,” says Yanson, whose younger brother, Leorey owns Ceres-Negros.

“We have a lot of football activities over the course of the year—the DFL (Dynamic Football League) for 10 months in a year and the Ceres Cup every summer—and we’re also planning a Nofa Invitational Cup to accommodate teams from other provinces.

“Negros has always been a powerhouse, but in the past years the club has opened the eyes and minds of the fans here that the province can play on a bigger stage.”

It definitely helps that the province has Panaad, which was opened in 1998 in time for the province’s hosting of the Centennial Palarong Pambansa.

Panaad also hosted the men’s football competition of the 2005 Southeast Asian Games. A proposal to refurbish the venue, which can seat about 10,000 fans, is already on the table to accommodate more spectators.

“I think it’s about time we improve Panaad,” says Yanson, who, along with Leorey, helped fund the refurbishing of the locker rooms and the installation of seats in the grandstand as part of the requirement for staging AFC tournaments.

Philippine Football Federation president Mariano “Nonong” Araneta, who watched the Ceres-Tampines match recently, was so impressed with the atmosphere that he immediately announced he would push for the Azkals’ games to be played at Panaad again. The national team last played there three years ago.

Ramsay has played in Australia for most of his career and also spent last season in football-mad Iran, but his move to Ceres gave him a different perspective about Philippine football.

“Ever since I joined Ceres, it’s clear that the culture of football is strong in Bacolod—the strongest by far in the country,” says Ramsay.

The Busmen are currently on top of their AFC Cup group with five points, ahead of more established sides Hanoi FC of Vietnam, Felda and Singapore, and Ramsay attributes their strong start to the competition to the support at home.

A team of local organizers led by Ceres-Negros executive Nicolas Golez work behind the scenes not just to make sure that matches go on smoothly, but are also well-promoted. The result is an atmosphere unlike any other in the country.

The fan group, Ultras Ceres, is growing while the sounds generated by the drumbeaters and the horns from Ceres buses parked outside the stadium give the game a local feel.

Reichelt and Ramsay think the country should look at Bacolod as an example in promoting the sport.

“I think everyone in the Philippines must look at the example of Bacolod in how to promote a game and maybe sit together and work together to ignite interest in other parts of the country,” says Reichelt.

“Ceres is the benchmark for all other Filipino clubs in terms of promoting the sport,” says Ramsay.

“If all clubs can follow suit, then Filipino football culture in general will become very strong.”