Warriors adjusting to life without Durant 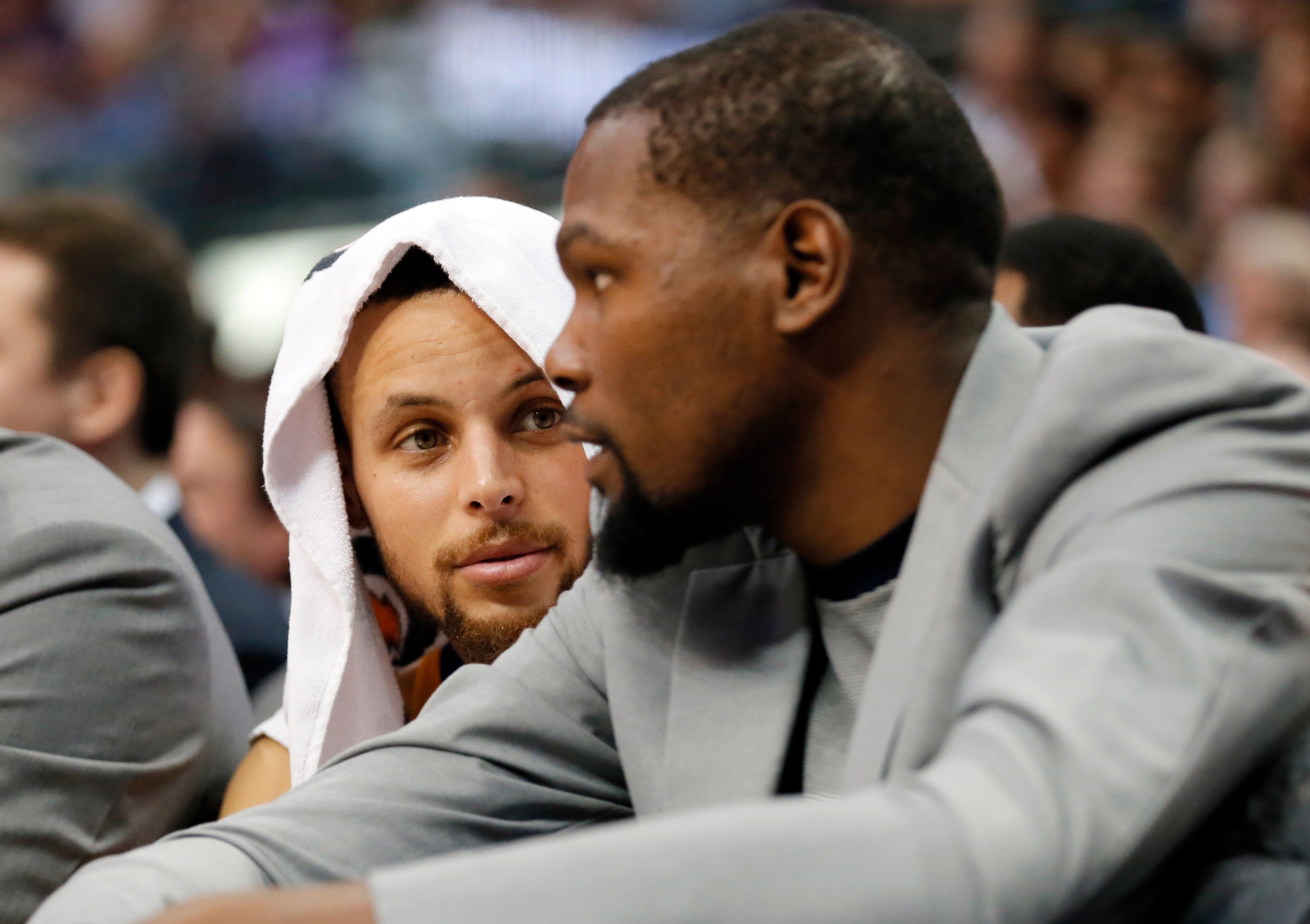 Golden State Warriors guard Stephen Curry, left, talks with Kevin Durant, right, in the first half of an NBA basketball game against the Dallas Mavericks on Tuesday, March 21, 2017, in Dallas. (AP Photo/Tony Gutierrez)

The Golden State Warriors showed they are finally adjusting to life without Kevin Durant after sweeping aside the Dallas Mavericks for a fifth straight victory on Tuesday.

Klay Thompson and Stephen Curry led the Warriors potent offense as the Western Conference leaders romped to a 112-87 victory at American Airlines Center in Texas.

It was the latest win in Golden State’s recent run, after the team went off the boil in the immediate aftermath of Durant’s knee injury last month which jolted their season.

Durant traveled with the team to Texas for the first time since suffering the injury but is not expected to return anytime soon.

The Warriors instead looked to Thompson and Curry to do the damage once again.

Thompson led a balanced offense with 23 points, while Curry had 17 points and nine assists.

But it was the Warriors defensive display that left coach Steve Kerr a happy man.

“When you’re out on the road you have to defend, you have to maintain a really good defense to win road games, and I think we’ve done that,” Kerr said. “In the past several seasons our team has been in the top five in the NBA defensively, and obviously we’ve got plenty of shooters and scorers.

“If we can defend at a high level we feel like we’re always going to find points and give ourselves a chance to win.”

The win saw the Warriors improve to 57-14 but it was a disappointing night for Curry’s elder brother Seth, who has excelled for the Mavs this season.

Dallas had begun brightly, draining six three-pointers in the first quarter to take a 30-28 lead.

But when Golden State upped the tempo Dallas were helpless to respond.

The Warriors rattled off 34 points in the second quarter to open a commanding 62-50 lead.

A 7-0 run at the start of the third quarter effectively sealed the contest’s outcome, leaving only the margin of victory up in the air.

“They are the best, probably that I’ve ever seen, of hit and runs, going 6-0, 8-0, 10-0 just like that with 3-point shots, great ball movement and defense,” Mavs coach Rick Carlisle said.

“We didn’t play well, that is pretty clear, and when we had shots we weren’t making them, and that doesn’t help.”

The Warriors preserved their 20-point lead heading into the final quarter and coasted to victory.

Ian Clark finished with 18 points from the bench for the Warriors while Patrick McCaw had 10.

Dallas, who fell to 30-40, saw Dirk Nowitzki lead their scoring with 16 points and nine rebounds. Nerlens Noel had 14 points and seven boards.