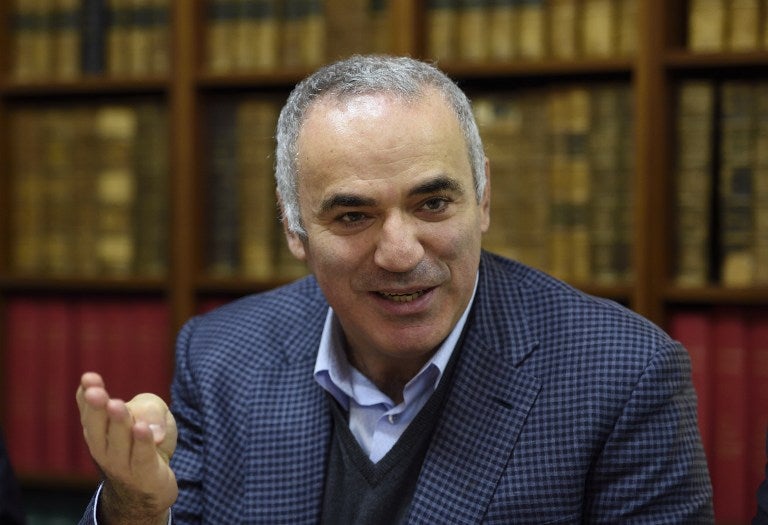 Russian chess legend and opposition activist Garry Kasparov wants to bring the game to one million children in Africa as a tool to sharpen their learning skills. AFP

PARIS, France — Russia’s former world chess champion Garry Kasparov wants to bring the game to a million children in Africa as an educational tool to sharpen their learning skills and build confidence.

“We have plenty of data collected from around the world… that proves beyond any doubt that classes with chess, especially at early age, 6 to 9, dramatically improve the skills of the kids… to learn how to process information and make decisions,” Kasparov told AFP in Paris.

The Russian chess legend attended the launch on Thursday evening of the francophone branch of the Kasparov Chess Foundation, which will focus on Africa, initially in Morocco, Ivory Coast, Senegal and Madagascar.

Chess “is a tool, not a recipe for all education problems, but it’s a very inexpensive and a very effective tool,” the 53-year-old champion of the game said.

He also it was important to fight the prejudice “that only certain countries can produce champions. There was nothing that special about the Soviet Union, just a lot of attention from the state and infrastructures in place that could help to find talents.”

The foundation will identify some pilot schools in the African countries, provide them with learning kits and train some teachers in chess with the goal of reaching one million children over the next five years.

Kasparov’s foundation has already introduced chess in school programmes around the world and he said he has found in developing countries that “there is more passion for success. They are willing to work harder.

“I expect the same passion in Africa. We just have to create the conditions.”

Kasparov, who became the youngest world chess champion in 1985 at age 22, and retired from the game in 2005.

He has become involved in politics and human rights issues and is an outspoken critic of the regime of President Vladimir Putin. CBB