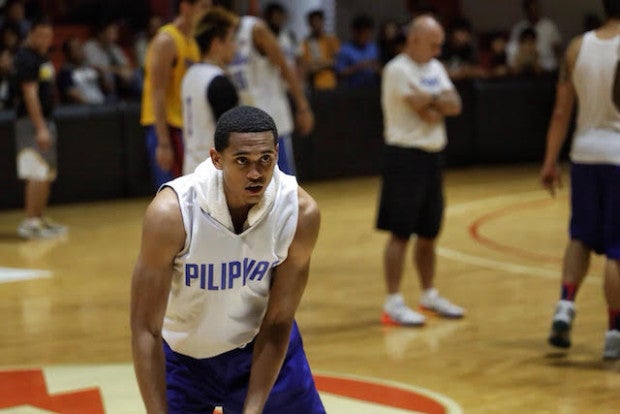 Jordan Clarkson during one of his practices with Gilas Pilipinas. Photo by Tristan Tamayo/INQUIRER.net

Clarkson expressed his willingness to suit up for Gilas Pilipinas two years ago and the Samahang Basketbol ng Pilipinas even pushed for the inclusion of the third-year NBA veteran in the team’s Fiba Asia roster in 2015.

But eligibility issues kept Clarkson, whose mother Annette hails from Pampanga, from wearing the country’s colors.

“We’re going to make playing for the Filipino national team happen,” said Clarkson in an interview with CBS Los Angeles.

“It just comes with time and being able to connect with those people, I feel all the support and love they had throughout my years in the NBA, so I’m still trying to do well for them and, hopefully, be able to put on for my country.”

Gilas Pilipinas team managed Butch Antonio assured the Samahang Basketbol ng Pilipinas are pulling all stops to get Clarkson playing for the team, but that would take time.

“With regard to Jordan, of course you know that we’re trying to work on papers and eligibility of FIBA. We know how much Jordan Clarkson wants to play for the country, but right now, the eligibility rules of FIBA limit this possibility.”

“Rest assured that through our legal counsel in SBP, Atty. Aga Francisco, who is also part of the legal commission, we’re trying to see if we can do anything about amending the eligibility rules of FIBA.

The 24-year-old Clarkson, who signed a four-year, $50 million extension with the Lakers in July 2016, was in Manila last May for a promotional visit for Nike and also showed his support to Gilas, which was preparing for the Fiba Olympic qualifying tournament during that time.

The 6-foot-5 Clarkson is averaging 14.7 points, 3.0 rebounds and 2.6 assists for the Lakers, who will miss the playoffs for the fourth consecutive year.