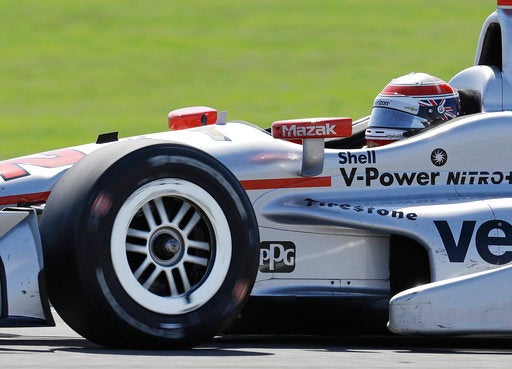 Will Power, of Australia, drives during the Grand Prix of Indianapolis IndyCar auto race at Indianapolis Motor Speedway. AP

INDIANAPOLIS — Will Power avoided the bad luck Saturday (Sunday Manila time). He outran everybody else in the IndyCar Grand Prix.

The Australian completed a dominant first weekend in Indianapolis by easily pulling away from Scott Dixon for his first victory of the season and Team Penske’s third in a row. The victory margin of 5.2830 seconds didn’t even seem that close, and Ryan Hunter-Reay was a distant third.

“I was just very conscious of the gap Dixon was closing and I kept thinking ‘He’s going to burn his tires off’ and then he kept closing,” Power said. “Then, boom, suddenly they went and I knew we were good.”

Until this weekend, nothing had come easily for Power this season.

A mechanical problem took him out of the season opener at St. Petersburg.

He seemed destined to win at Alabama until a flat tire forced him to pit and dropped him to 14th.

The following week, at Phoenix, Power also was in contention for the lead — until a caution flag came out while he was already on pit lane. He wound up second, more than nine seconds behind teammate Simon Pagenaud.

In Indy, Power was on a mission to change his misfortunes — and he did.

He posted the fastest lap in practice Friday then won the pole in a track record time. On Saturday, he led 61 of 85 laps, surrendered the lead twice — both after pit stops — and never was passed on the 2.439-mile, 14-turn road course.

Power picked up his 30th career win in his 175th career start and moved past teammate Helio Castroneves and former Penske driver Rick Mears into No. 11 on the all-time victory list.

And this time, nothing got between Power and victory lane— not even a caution period

“I think today we got the most out of the car,” Dixon said. “I think Honda was just too much as far as the red tires and the last five laps, we just couldn’t run down Will.”

Power’s teammates had the same problem.

Three-time Indianapolis 500 winner Helio Castroneves led the other 24 laps but faded following his final pit stop. He finished fifth, and it marked the second straight race the Penske drivers led every lap.

Josef Newgarden spent most of the day in the top five — until being assessed drive-through penalties for pit-speed violations on back-to-back laps. He finished 11th.

Honda wound up taking five of the next seven spots after Power, starting with Dixon of Chip Ganassi Racing and Hunter-Reay or Pagenaud finished the day with 10-point lead over Dixon in the standings.

But Power joined Pagenaud as the only two-time winners of the race. Pagenaud won the inaugural race in 2014 and again last season. Power won previously in 2015. Each of the last three grand prix winners started on the pole, and each drove for Roger Penske.