Marquez misery extended with yet another ‘robbery’ | Inquirer Sports

Marquez misery extended with yet another ‘robbery’ 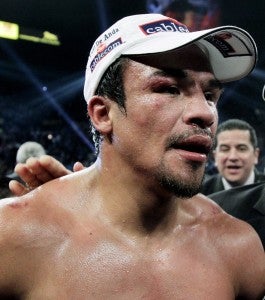 FRUSTRATED Mexico's Juan Manuel Marquez walks out of the ring after being defeated by Manny Pacquiao, of the Philippines during a WBO welterweight title fight Saturday, Nov. 12, 2011, in Las Vegas. Marquez said he was thinking of retiring from boxing after the frustration of another defeat that felt like victory until the judges' verdict was announced. AP PHOTO/JULIE JACOBSON

Pacquiao stretched his win streak to 15 fights with a majority decision over Marquez on Saturday, two judges handing him victory by margins of 116-112 and 115-113 while the third scored the welterweight showdown a 114-114 draw.

“This fight was the biggest of my career,” Marquez said. “We wanted them to score this fight the way it happened, not how they scored it.”

Marquez had taunted Pacquiao before the fight with claims that he was the true winner of their first two fights, a 2004 draw and a 2008 rematch that went to Pacquiao by a single point on a single scorecard.

But the latest near-miss was almost more than Marquez could stand.

“It was a robbery,” Marquez said. “They robbed me again.”

Three days after saying he had not thought about retirement, Marquez was pondering hanging up his gloves after the frustration of another defeat that felt like victory until the judges’ verdict was announced.

“It’s the result of the fight that makes me think about retirement,” he said. “I need to sit down with my family and my camp and make a decision about retiring or continuing in the sport.

“I’m happy with my performance. I don’t know what I needed to do to change the minds of the judges.

“It’s hard when you’re fighting your rival and three judges too.”

Marquez is likely to be offered a fourth fight against Pacquiao after making at least $5 million and more likely near $10 million for Saturday’s fight, with Pacquiao taking home anywhere from $22 million to $30 million.

But at this point, Marquez figures even if he knocks out Pacquiao, it might not be enough.

“I believe I need to drop him and if I drop him they are going to pick him up and have him fight again,” Marquez said. “I’m frustrated. I’m really, really frustrated.”

Marquez said he would not protest the verdict but “I don’t think it’s correct.”

“I thought I won the fight clearly,” he said. “I felt like I connected with a lot of solid punches in the fight. I felt so good. I never felt his punches.”

As in their first two encounters, toe-to-toe exchanges and flurries where both men connected on punishing blows kept tension at a fever pitch, rousing the crowds into standing ovations in several rounds.

“For me the best judge is the audience. They responded sensationally,” said Marquez. “Only three people there, the judges, didn’t see the same thing.”

“I was already thinking of making that shirt,” Marquez said.