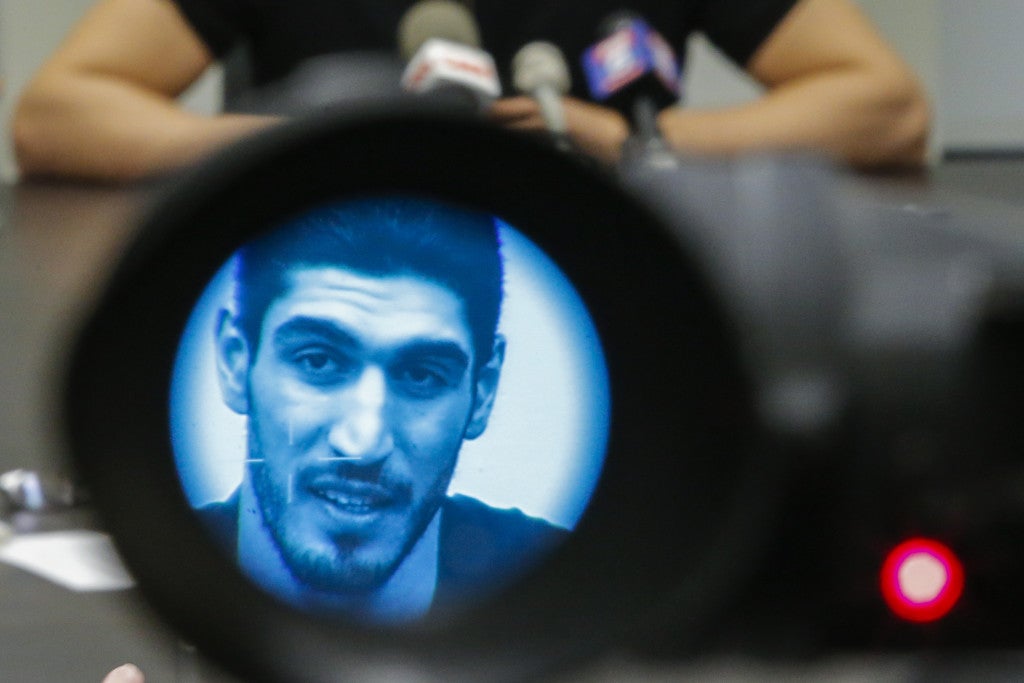 Turkish NBA Player Enes Kanter, seen through a video camera, speaks to the media during a news conference about his detention at a Romanian airport on May 22, 2017 in New York City. Kanter returned to the U.S. after being detained for several hours at a Romanian airport following statements he made criticizing Turkey’s president Recep Tayyip Erdogan. Eduardo Munoz Alvarez/Getty Images/AFP

Turkey issued an arrest warrant on Friday for Turkish NBA star Enes Kanter, accusing him of being a member of a “terror group”, a pro-government newspaper reported.

A judge issued the arrest warrant after an Istanbul prosecutor opened an investigation into Kanter’s alleged “membership of an armed terrorist organization”, Sabah daily reported.

Turkey accuses US-based Gulen of ordering the failed coup and refers to the movement as the “Fethullah Terrorist Organization” (FETO). Gulen denies the claims.

The arrest warrant refers to Kanter’s alleged use of an encrypted messaging application called Bylock, Sabah said, which Turkey claims was especially created for Gulen supporters.

It also referred to Kanter’s “praise for a terror organization” in messages via his social media accounts, the daily reported.

The Swiss-born star hit back at the Sabah story on Twitter, sharing a screenshot of the article, adding: “You cannot catch me. Hahaha. Don’t waste your energy.

“I am already going to come to (Turkey) to spit on all of your ugly, hate-filled faces.”

Sabah daily added that the prosecutor would apply for an Interpol red notice — to inform Interpol’s 190 members that someone’s arrest is sought and thus ensure their deportation — to the justice ministry.

Kanter, who has compared Erdogan to Adolf Hitler, was detained in Romania at the weekend after being informed that his Turkish passport had been cancelled.

He claimed the cancellation was linked to his criticism of Erdogan’s government and told reporters on Monday he would seek American citizenship.