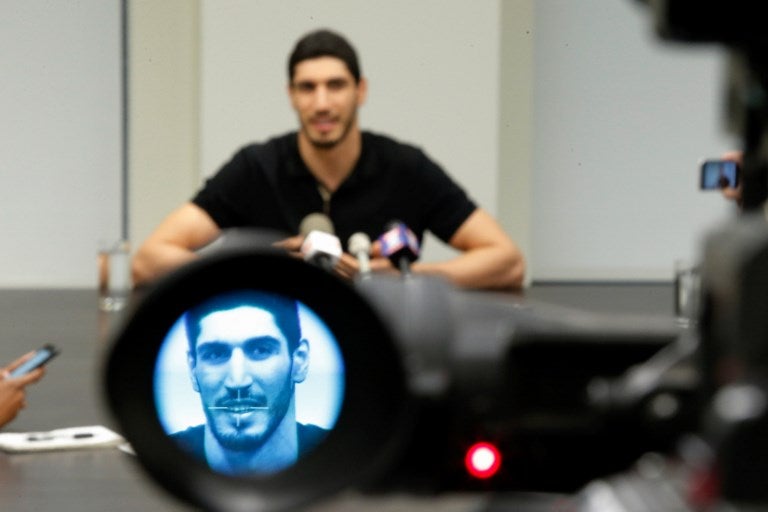 NEW YORK, NY – MAY 22: Turkish NBA Player Enes Kanter speaks to media during a news conference about his detention at a Romanian airport on May 22, 2017 in New York City. Kanter returned to the U.S. after being detained for several hours at a Romanian airport following statements he made criticizing Turkey’s president Recep Tayyip Erdogan. Eduardo Munoz Alvarez/Getty Images/AFP

“My father is arrested because of my outspoken criticism of the ruling party,” Kanter wrote on his website. “He may get tortured for simply being my family member.”

The Oklahoma City Thunder center, who had voiced support for Muslim cleric Fethulla Gulen in Twitter postings after an attempted putsch last July aimed at ousting Erdogan, said thousands in Turkey could face similar fates for their support of the Gulen-inspired Hizmet, which he calls a social initiative advocating for human rights.

Turkey, meanwhile, accuses US-based Gulen of ordering the failed coup and refers to the movement as the “Fethulla Terrorist Organization”.

Kanter’s family has publicly denounced the player’s support of Gulen.

The pro-government Anadolu news agency reported Friday that Mehmet Kanter had been placed in protective custody in connection with an inquiry targeting Gulen.

The arrest came a week after a warrant was issued for Enes Kanter, whose passport has been cancelled by Turkish authorities.

Kanter, who has compared Erdogan to Adolf Hitler, was briefly detained in Romania on May 20 but returned to the United States with his green card, telling reporters he wanted to seek American citizenship.