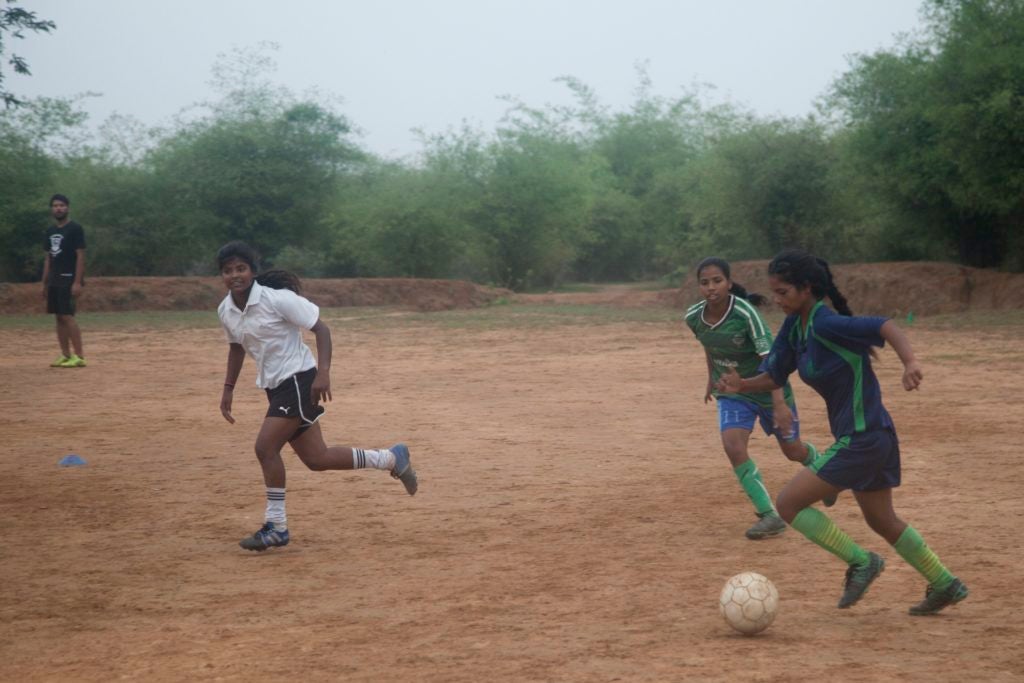 In this Thursday, June 8, 2017 photo, senior students of Yuwa, a non-profit organization teaching girls soccer, practice early morning in Ormanjhi, Jharkhand state, India. For all of the girls, soccer — or football, as they call it — is an opportunity for them to overcome deeply entrenched discrimination in their rural villages. (AP Photo/Rishi Lekhi)

HUTUP, INDIA—The aging bus meanders through the narrow streets of a tiny village in the eastern Indian state of Jharkhand, the smell of manure wafting through the air. A thick darkness blankets the neighborhood ahead of the early morning sunrise.

It’s 5 a.m., and the young girls hop on the bus, one by one. They range in age from slightly older than toddlers to young women approaching their 20s. Some carry soccer balls.

They are heading to an immense empty field where they will hold their daily soccer practice, the younger ones eager to perfect their ball-handling skills while the teenagers act as coaches, earning money to pay for their education.

For all of the girls, soccer — or football, as they call it — is an opportunity for them to overcome deeply entrenched discrimination in their rural villages.

“We like to play football because there are only girls, some boys, but the teachers say if I have a problem, I can solve it with them,” says 13-year-old Pratibha Kumari as she walks to her home after practice.

Pratibha was alluding to the biased views toward gender in India, particularly in rural areas like her village in Jharkhand. In India, 12 million adolescent girls — almost one in five — have experienced physical violence since the age of 15, and 2.6 million of girls aged 15-19 have experienced forced sexual intercourse or a forced sexual act, according to statistics from UNICEF. In Jharkhand, six in 10 girls marry before the legal age of 18.

“This is the part of India no one in the cities of India really sees. But this is India — this is the norm,” says Franz Gastler, founder of Yuwa, a non-profit organization teaching girls soccer. Gastler, who originally hails from Minnesota, started Yuwa in 2009 and added a school for girls in 2015. “Boys just harass girls here — it’s the norm and older women have grown up being abused, so they are used to it.”

Yuwa seeks to empower the girls by showing them they have the right to focus on their education instead of getting married and starting a family, and the right to choose their life path. For several of the girls, Yuwa has allowed them to travel outside of the area around their village for the first time. Some have taken trips around India or even to Spain for a tournament. Around 300 girls participate in the Yuwa soccer program and about 80 of those girls attend the Yuwa School for Girls, Gastler, says. The organization, which has received a Nike Game Changers’ award, also hosts workshops to educate about health and life skills, such as menstruation, and parent meetings. Yuwa received more than $200,000 in monetary donations and grants and in-kind donations in 2016 from public and private sponsors, according to the organization’s financial records.

Before the soccer drills start at the early morning practice, the girls laugh, cheer and gossip to each other. Here, on the soccer field, their backgrounds don’t define them. But as they share their stories, it’s easy to see the obstacles they face.

Neeta Kumari, 17, is one of six children, five girls and one boy (The vast majority of girls in Jharkhand State have the title of kumari, which means unmarried girl, until they are married and it changes.) Her parents kept having children until they finally had a boy. Her three older sisters got married at 16 and 17, she says, and never finished their education. Now they are mothers with little hope for their future. But they support Neeta’s dream to become a journalist and her enthusiasm for soccer.

“I feel very good because my sisters are supporting me,” she says.

Having changed out of their soccer shorts, cleats and striped socks, the girls arrive at the small cement school on the Yuwa campus in groups. Some arrive just as morning assembly starts, their hair still wet from washing it after practice.

An assembly features skits performed by some of the girls in the language of Sadri, one of several languages spoken in Jharkhand. The state is home to 32 indigenous tribes, each with its own unique culture. About one-quarter to one-third of the girls at Yuwa are indigenous, but most speak Sadri at home, says Rose Thomson, education director at Yuwa. Though the school teaches English and Hindi, Thomson says it’s important for the girls to speak Sadri. “They have this idea that there is a hierarchy of languages: English, Hindi and then Sadri. They’ll get embarrassed to speak their own language. We talk about it quite a bit about how they should be proud of it and should speak their own language.”

Radha Kumari was taunted for playing football. “Why are you playing a boy’s sport?” her family would ask her. She, instead, was supposed to be doing her chores and grazing cattle. Though she was 12, she had never attended school. Then she heard about Yuwa and the other girls attending a tournament in Spain.

Radha, now 14, decided she should do the same thing. She joined the soccer group, traveled to Spain for a tournament and has now become a coach, teaching the younger girls drills and exercises and earning money to attend school. Older girls like Radha train to become coaches and earn money to pay for their education, teaching them that they can be self-reliant and earn their own money. She now dreams of becoming a mechanical engineer.

“When I see my world, when I look at nature, bridges, airplanes and I think about it, it’s so creative and beautifully made and I want to do something like that,” she says.

“I have a desire to learn something new.”