After heated finals, things are ‘cool’ between Semerad twins 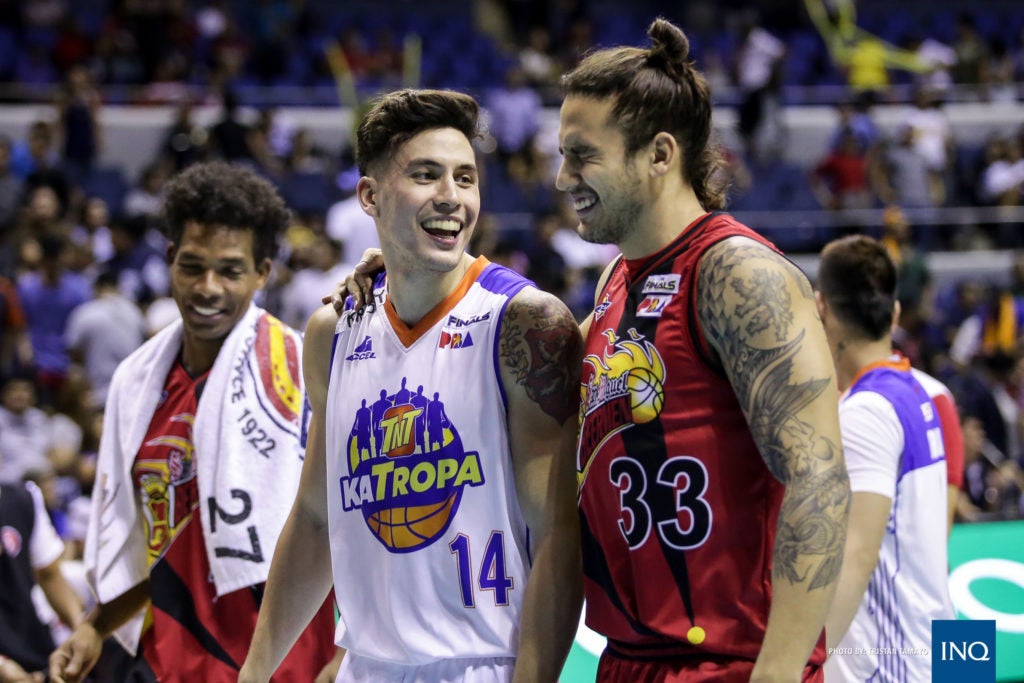 All is fair in love and war, and being twins is no exception.

Semerad twins David and Anthony found themselves on opposing sides when San Miguel battled TNT in the 2017 PBA Commissioner’s Cup Finals, and even had brushes defending each other in the short minutes they played on the floor.

Things came to a head in Game 6 on Sunday, with the Beermen looking for the kill and the KaTropa desperate to force a Game 7.

At the 5:43 mark of the first quarter, the Fil-Aussie brothers battled for a jumpball, which the younger Anthony won, but it came at an expense as David got elbowed on the nose.

“I didn’t actually know I broke his nose,” said Anthony, who has emerged as a reliable sniper for TNT after coming from a midseason trade this past conference. “We were just going at it, going hard. Then after the jumpball, I went to sprint and he likes to stick to me like glue. I guess he was just so close to me when I did the run, I accidentally hit him. It was really unlucky and I didn’t even know I hit him.”

David, who was seldom used in the San Miguel front but has proven himself as a wide-bodied banger when needed, understood that things like that happen.

“I think it was just in the moment in the game and his elbow came and hit me on the nose. It put me down on the ground. It’s hurting a little bit, a bit crooked.”

Though the exchange led to tempers flaring on both sides, the Semerads understand that it’s all just part of the game.

“It’s done. During the game, I was a bit irritated, but now, we’re cool, we’re cool,” said David.

“Off the court, everything’s normal and everything’s fine. We’re having dinner, we’re going to the gym together. But I guess on the court, he’s the guy initiating it and wanting to go hard. But again, it’s part of the game so it’s ok,” Anthony added.

And as the buzzer sounded, it was San Miguel which came out on top, 115-91, to win its fifth championship in three years.

David said the taste of victory someone alleviated his pain and he’s willing to do it all over for another chance at a title, even if it meant him facing his twin brother again.

“It’s worth it for the championship,” he said. “It’s all good. Whatever happened on the court, we’re still brothers off the court.”