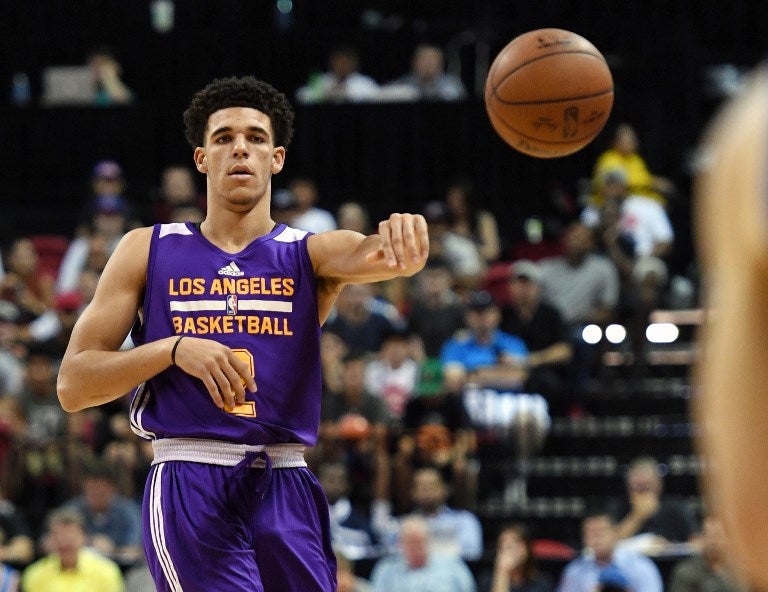 Lonzo Ball #2 of the Los Angeles Lakers passes the ball against the Cleveland Cavaliers during the 2017 Summer League at the Thomas & Mack Center on July 13, 2017 in Las Vegas, Nevada. Los Angeles won 94-83. NOTE TO USER: User expressly acknowledges and agrees that, by downloading and or using this photograph, User is consenting to the terms and conditions of the Getty Images License Agreement. Ethan Miller/Getty Images/AFP

Lonzo Ball had another strong performance in the NBA Summer League, this time in another brand of footwear.

Ball’s Los Angeles Lakers defeated the Cleveland Cavaliers 94-83 in tournament play on Thursday. A night after a 36-point, eight-rebound, 11-assist performance, Ball had 16 points, 12 assists and 10 rebounds against Cleveland.

Thursday’s winners advanced to the quarterfinal round on Saturday with Portland playing San Antonio, Miami facing Memphis, Dallas against Boston and the Lakers meeting Brooklyn.

Ball created quite a sensation Wednesday when, instead of his own ZO2 shoes, which sell for $495 under his family’s independent fashion line Big Baller Brand, he wore Nike Kobe AD sneakers. Ball kept people guessing Thursday when he jogged onto the court in a pair of James Harden signature Adidas.

“Big Baller Brand, you’ve got freedom to do whatever you want,” Ball said on the ESPN broadcast after the game. “I’m showcasing that.”

Ball showed off the gifted passing skills that president of basketball operations Magic Johnson coveted before the draft. He tossed alley-oop passes, outlets for dunks, kick-outs for jumpers and nifty passes in traffic. It was the third straight game of double-digit assists for Ball.

Fellow first-round draft pick Kyle Kuzma continued his strong summer with 20 points and a nail-in-the-coffin 3-pointer with 1:00 left off an assist by Ball to go up 90-81. The 2016-17 NBA Development League MVP Vander Blue finished with 18 points for the Lakers (3-2).

Bryn Forbes, the summer league’s leading scorer, continued his summer onslaught with 29 points and five assists in the Spurs’ victory.

The Celtics led from start to finish and simply ran the Warriors off the court with a 20-5 first quarter. The Warriors (1-4) have been focused on getting extra court time for second-year player Patrick McCaw, who earned rotation minutes with the champs during his rookie season. He scored 20 points on 6-for-13 shooting.

The Heat (4-1) got big production from the diminutive Justin Robinson in the narrow victory. The 5-foot-8, undrafted guard from Monmouth scored 22 points and handed out six assists. Robinson hit a step back jumper to take an 80-78 lead with 3:38 remaining. The Clippers never lead again as a 10-1 stretch late in the fourth quarter put Los Angeles away.

In a matchup between lottery point guards, Dennis Smith Jr. was the one that had fans gasping. The No. 9 pick of the 2017 draft scored 25 points, including 15 in the first half, to lead the Mavericks to victory.

The matchup with No. 5 overall pick De’Aaron Fox didn’t last long. Fox, who sat out Wednesday, tweaked an ankle, again, in the first quarter then didn’t play in the second half. He was held scoreless in seven minutes.

Wayne Selden scored 33 points in 33 minutes while leading the Grizzlies to victory.

Nick Johnson hit a jumper with 1:25 left to give Portland an 85-82 lead and Toronto didn’t score again until 14.3 seconds left. By then it was too late as 16th-seeded Trail Blazers pulled off the upset of the top-seeded Raptors.