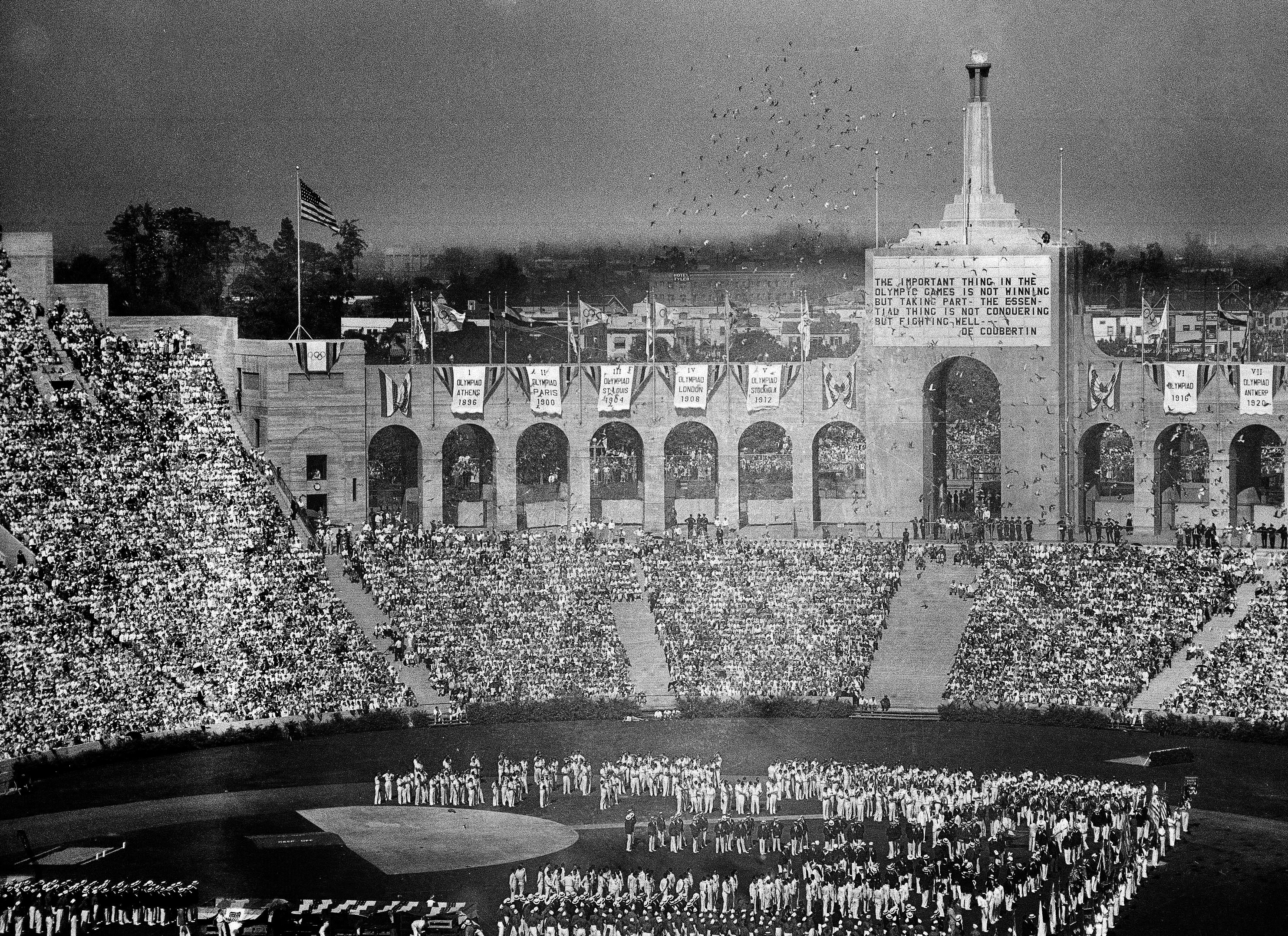 FILE – In this July 30, 1932, file photo, doves are released during opening ceremonies of the Tenth Olympiad at the Coliseum in Los Angeles. The Los Angeles City Council is expected Friday, Aug. 11, 2017 to endorse a proposal to host the 2028 Olympics, following an announcement of a deal last month to leave 2024 to Paris.(AP Photo)

LOS ANGELES — Los Angeles took another step Friday toward bringing the 2028 Olympics to the city, despite questions about future costs.

The City Council voted 12-0 to endorse documents at the heart of its plan to stage the Summer Olympics for the third time since 1932. The contract outlines Los Angeles’ financial responsibility in hosting the Games, including covering shortfalls if the $5.3 billion plan runs into the red. In addition, a budget for the proposed 2028 Games has not been completed.

The vote followed a morning-long committee hearing that mingled civic cheerleading and salutes to Olympic champions past with warnings about potential costs and suggestions the international event would drive up housing costs and drive out the homeless.

“This opportunity is too great, we cannot pass it up,” council President Herb Wesson Jr. said.

The vote took place less than two weeks after the city announced an agreement with international Olympic leaders ceding the 2024 Games to rival Paris, while opening the way for Los Angeles to host the 2028 Games.

City analysts concluded that the 2028 plan, while incomplete, included significant safeguards for taxpayer dollars. The Olympics have a notorious history of runaway costs, but city officials have argued their proposal can stay within budget by relying on the region’s many existing stadiums and arenas, including the Los Angeles Memorial Coliseum and Staples Center.

Los Angeles had bid on the 2024 Games, but embraced the 2028 alternative after Paris emerged as the front-runner for 2024 and the IOC proposed the unusual dual award.

At one point during the sometimes tense meeting, Councilman Joe Buscaino shouted at a heckler, “This is right for the city.” As the vote was being taken, protesters yelled from the back of the council chamber, “Let us speak” and “sellout.”

Steve Ducey of No Olympics LA, an opposition group, said the vote would take place without an independent budget analysis.

Much of the meeting amounted to a choreographed tribute to the city’s Olympic legacy, with frequent references to the LA Games in 1932 and 1984 and the athletes who competed in them.

Olympic champions Carl Lewis and Janet Evans, who are part of a private committee behind the bid, urged approval of the plan.

Lewis, holder of nine Olympic gold medals in track and field, said the Games are not just an event, “it’s about a whole city.”

The deal comes with millions of dollars of financial sweeteners for accepting the later date. However, the extra four years pose challenges for Los Angeles from maintaining public interest to rewriting deals for stadiums, arenas and housing that were all hooked to 2024.

City analysts recommended the council approve the contract, which faced an Aug. 18 deadline, but also emphasized a revised budget for 2028 could take months to complete.

“There are inherent risks to hosting such major events so far into the future,” city analysts noted in a report on the agreement.

The bulk of the revenue for the Games is expected to come from ticket sales and corporate sponsorships.

Part of the deal includes creation of a reserve fund to cover any cost overruns, with the city kicking in $270 million. The state is expected to commit a similar amount, but because of the legislative calendar the state might not be able to consider its piece of the proposal until next year.

In a statement, Mayor Eric Garcetti called the agreement “the deal of a lifetime.”