There shouldn’t be much to expect from a squad formed just a couple of years ago. But the Philippine men’s ice hockey team thinks it’s out to surprise in the 29th Southeast Asian Games in Kuala Lumpur this month.

“I like our chances,” says national team captain Steven Füglister. “We’ve been training consistently as a team. I think other countries don’t have the luxury of having the ice times that we have. So that kind of worked for us. We have a great team spirit; we’re all excited.”

Almost all of the players are homegrown, plucked out of club teams, which back then, pretty much got borne out of “The Mighty Ducks,” the ’90s American hit comedy film about a ragtag ice hockey team.

“Ice hockey has been in the Philippines for 20 years, since they built the first rink,” says Füglister. “It’s also around that time when the famous ‘Mighty Ducks’ movie came out from Disney. So if I ask most Filipinos why they even started playing ice hockey, everyone says that.”

Perhaps, the affinity for the film is still there. And there’s no harm hoping that the underdogs will also turn champions in the SEA Games. 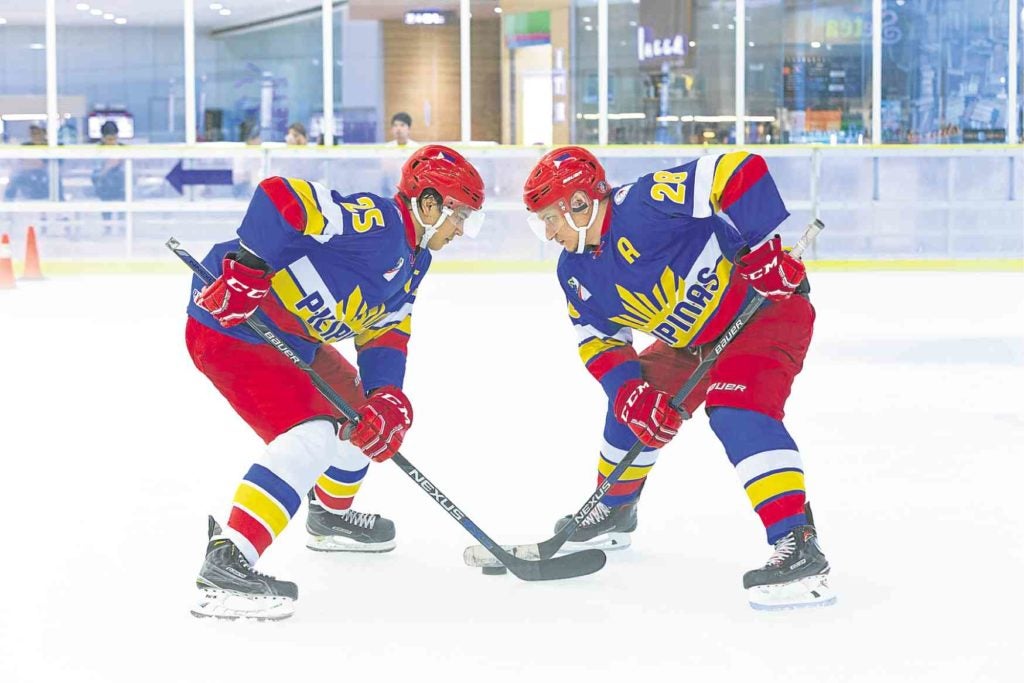 The Philippines won a bronze in Division 2 of men’s ice hockey in the Asian Winter Games in Sapporo, Japan, last February. It’s a notable feat, but clearly positioned ahead of them are Singapore and Thailand which saw action in Division 1.

But there’s no discouraging the squad. “There’s the combination of physicality and also grace in skating,” says Füglister, then adds with a laugh, “They call it like ballet on ice with a bit of murder thrown in.

Füglister, a 31-year-old Filipino-Swiss, used to play in a semi-pro league in Switzerland. But most of his teammates learned the game at SM mall rinks.

“Unlike what many people think, we’re not a Fil-Am or Fil-Canadian team,” the 6-foot forward says. “It’s a Filipino team. We’re only three guys who are half-Filipinos, but we’ve lived here for a while. So it’s not like we fly in foreigners to play, then leave again.”

Come game time, though, it will be the right mix of strength and skills that will matter.

“I like the mix—we have experienced guys, we have young guys, we have enthusiastic guys but we all pull in the same direction,” says Füglister. “As a team, we have a vision we want to achieve and everyone believes in that, which makes it easy to build a very good team spirit.”