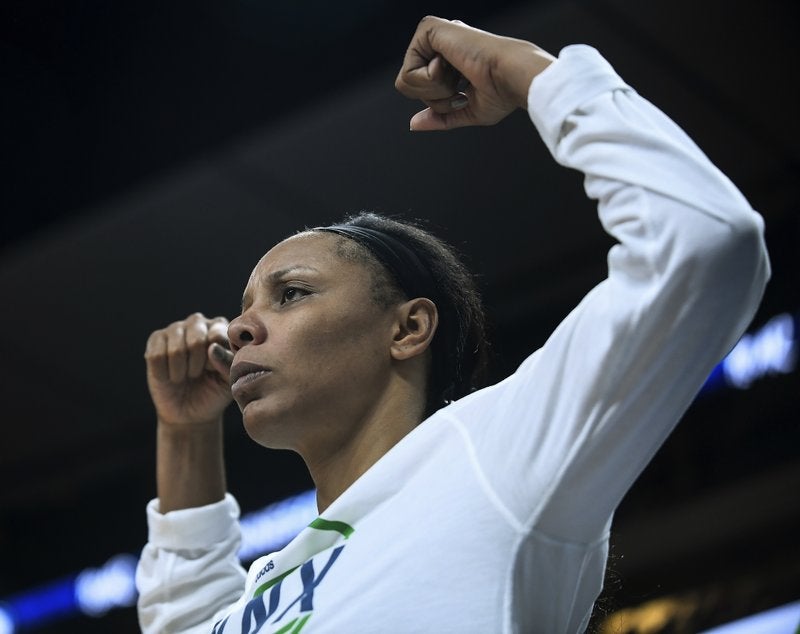 FILE – In this Aug. 3, 2017, file photo, Minnesota Lynx forward Plenette Pierson flexes her muscles to celebrate after a play by center Sylvia Fowles during the third quarter against the Atlanta Dream in a WNBA basketball game in St. Paul, Minn. Minnesota secured the top seed in the WNBA playoffs while the Los Angeles Sparks will be the two seed. (Aaron Lavinsky/Star Tribune via AP, File)

ST. PAUL, Minnesota — Maya Moore scored 26 points and Renee Montgomery added 18 to help the Minnesota Lynx secure the top seed in the WNBA playoffs with an 86-72 victory over the Washington Mystics on Sunday.

Minnesota (27-7) finished the season a game ahead of Los Angeles (26-8). Both teams have byes until in the semifinals on Sept. 12.
Washington (18-16) is the sixth seed and plays the Dallas Wings on Wednesday.

Kristi Toliver hit a 3-pointer with 4:28 remaining to pull Washington within 80-71, but Moore answered at the other end and the Mystics didn’t score again until the 2:09 mark.

It was Minnesota’s final game at the Xcel Energy Center as the Lynx will play their home playoff games at the University of Minnesota’s Williams Arena. The team is moving to accommodate the Minnesota Wild’s preseason schedule.

LOS ANGELES — Nneka Ogwumike scored 21 points and Candace Parker had a double-double as the defending champion Los Angeles Sparks closed the WNBA regular season with a win over Connecticut.

Los Angeles (26-8) went 15-1 at home, but finished a game behind Minnesota for the top seed in the playoffs. The Sparks have a bye until the semifinals. The Sun (21-13) are the fourth seed and have a first-round bye.

Parker had 12 points and 14 rebounds for the Sparks and Odyssey Sims had 16 points.

Courtney Williams led the Suns with 19 points. Jonquel Jones had 10 rebounds to finish with 403, the first player in league history to surpass 400. Tina Charles held the old record at 398. With 10 points, Jones had 20 double-doubles this season.

ARLINGTON, Texas — Tina Charles had 18 points and 18 rebounds to help New York clinch the third seed in the playoffs with a win over the Wings and extend the Liberty’s winning streak to 10 games.

The Liberty (22-12) matched the franchise record for longest winning streak and have a first-round bye. The seventh-seeded Wings (16-18) play at No. 6 Washington in a one-game playoff on Wednesday.

Trailing 82-79 after a Charles putback with 22.1 seconds to play, the Wings missed, but forced a turnover and Aerial Powers scored on a putback with 3.7 seconds left. When the Liberty inbounded the ball in the frontcourt after a timeout, they had a backcourt violation, giving Dallas one last shot. Skylar Diggins-Smith’s attempt from the 3-point line bounced off the rim at the buzzer.

PHOENIX — Brittney Griner scored 30 points as the Phoenix Mercury closed the regular season with a victory over the Dream on Sunday to secure the fifth seed in the playoffs.

Griner reached the 30-point mark for the sixth time in her career with a reverse layup with 1:23 remaining in the fourth quarter. She blocked Elizabeth Williams’ shot at the other end. All six of her 30-point games have come this season.

Leilani Mitchell added 18 points for Phoenix and Diana Taurasi was held to nine points on 3-of-12 shooting.

Rookie Brittney Sykes scored a career-best 33 points for Atlanta (12-22). She was 12 of 19 from the floor and made seven free throws. Tiffany Hayes added 15 points, and Camille Little moved into a tie with Lauren Jackson for 12th place in WNBA history with 2,447 rebounds, passing Yolanda Griffith.

After Stewart’s makes, Allie Quigley curled around a high screen but her long 3 was off the mark. Seattle’s Noelle Quinn sealed it by making two free throws with 11.2 seconds left.

Loyd added 25 points for Seattle (15-19), which plays at Phoenix on Wednesday night in the first round of the playoffs. Stewart made 10 of 12 at the stripe as the Storm only missed three free throws in 27 attempts.