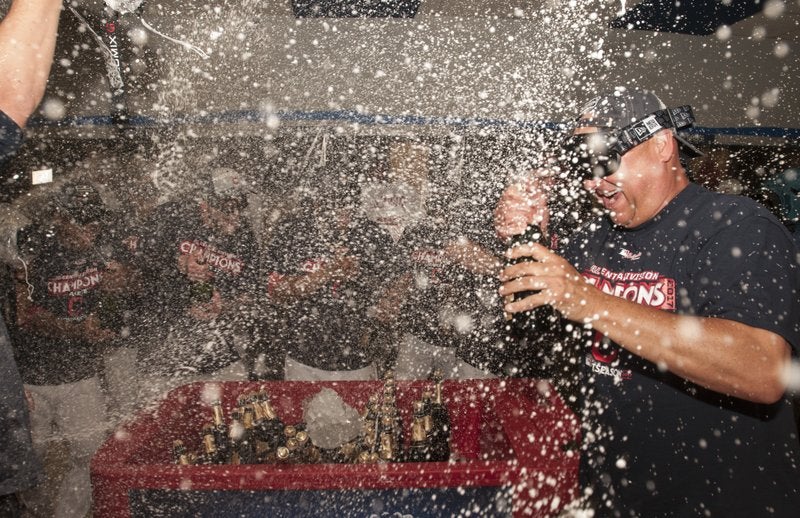 CLEVELAND — There was champagne chilling on ice for them, bottles and bottles of bubbly and beer.

But before the Cleveland Indians partied after winning a second straight AL Central title, there was work to be done to complete a week none of them will ever forget.

They could have taken the easy route and phoned it in.

Cleveland’s ace pushed to the front of the Cy Young race with another dominant start and Edwin Encarnacion hit a two-run homer as the Indians, who officially clinched the division crown a day earlier, kept on rolling with a 3-2 victory over the Kansas City Royals.

Kluber (17-4), who has lost once since July 4, allowed three singles in seven innings and has not given up a run in 22 straight.

The right-hander set the tone on a day of celebration which began with the Indians standing together in front of their dugout to watch a flag rise beyond the center-field wall commemorating their latest division title.

The Indians were going to have a good time — win or lose — but they didn’t want to disappoint another sellout crowd or fans captivated by their recent record 22-game winning streak.

“When we come out here and it’s time to play, we want to win,” Kluber said. “Nobody in that clubhouse likes losing, so regardless of whether we clinched or not, we were going to come out and try to win the ballgame and here’s what we’re going to do from here on out.”

Encarnacion homered in the fourth off Danny Duffy (8-9) as the Indians improved to 33-5 since Aug. 11 despite getting only three hits.
The Royals closed to 3-2 in the eighth on a two-out, two-run single by Brandon Moss off Tyler Olson. Cody Allen finished the inning and then worked out of a two-on jam in the ninth for his 28th save.

As they left the field, the Indians were handed AL Central championship T-shirts, caps and swimming googles to put on before heading to their clubhouse. Moments later, champagne corks popped and the room was turned into a free-for-all of sudsy spray.

Last year, the Indians celebrated their division, playoff and AL Championship Series wins on the road. Being at home made this one more special.

“It never gets old,” said pitcher Josh Tomlin, who has been with the Indians since 2010. “This is why you play the game — to win. And to be able to celebrate victories like this or little milestones like this.”

In the major statistical categories, Kluber trails only Boston’s Chris Sale, his closest competition for the pitching award, in strikeouts.

“He’s a tough draw,” Royals manager Ned Yost said. “He’s a premier guy. The year he won the Cy Young is the way he looks now. He’s in the conversation again this year.”

Jason Kipnis didn’t embarrass himself in the outfield. He didn’t do anything, really.

The Indians’ two-time All-Star second baseman made his debut in center but didn’t have a chance. He had been on the disabled list since Aug. 6 with a hamstring injury.

“It was good. I didn’t touch a ball all day offensively or defensively,” said Kipnis, who struck out twice. “I had nothing, but it was fun. Obviously, I had some nerves.”

As soon as Kipnis left the game, two balls were immediately hit to center.

The Indians have allowed four runs or less in 24 consecutive games, the longest such streak since the St. Louis Cardinals had a 25-game run in 1942-3.

Royals: C Salvador Perez (pulled side muscle) and OF Lorenzo Cain (rest) sat out but are expected to return Tuesday for the series opener in Toronto.

Indians: All-Star 2B Jose Ramirez (hamstring) was rested for the second day in a row as a precaution. … Team president Chris Antonetti said there is still no clarity on whether OF Michael Brantley will return this season. He’s been out since Aug. 9 with an ankle injury. … Rookie OF Bradley Zimmer (broken hand) is keeping up with his conditioning and maintaining his arm strength after surgery. Zimmer had a plate and nine screws inserted into his hand, which he broke on a headfirst dive into first.

Royals: Either RHP Ian Kennedy or Sam Gaviglio will start against the Blue Jays. Kennedy missed his last turn in the rotation with shoulder fatigue. Gaviglio has started twice since being claimed on waivers from Seattle.
Indians: RHP Mike Clevinger will look for his 11th win on Tuesday in the opener of a three-game series in Los Angeles. He was drafted by the Angels in 2011 and traded to Cleveland in 2014.