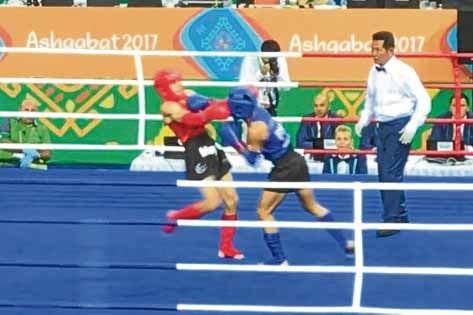 ASHGABAT—Phillip Delarmino knows that an aggressive mind-set could change the complexion of the fight regardless of the odds.

Using his tested ploy, the muay fighter from Iloilo City hurdled Rusdem Bayramdurdyyew of host Turkmenistan in the 5th Asian Indoor and Martial Arts Games here and silenced his foe’s sea of frenetic supporters to progress to the gold-medal match.

Already assured of the silver medal, Delarmino will engage in the most lucrative fight of his career yet in the men’s -57kg finals against Chotichanin Kokkrachai of Thailand, the country where the full-contact sport originated.

“I will stick to our strategy of staying aggressive throughout,” said the 26-year-old Delarmino, whose claim to fame were a pair of silver finishes in the 2014 Asian Beach Games and 2013 Burma Southeast Asian Games.

“He (Kokkrachai) is more of a technical fighter but we will not fight on his terms. We would rather be assertive and throw everything we have,” said muay coach Billy Alumno.

More than the P2-million cash incentive that Delarmino can receive from the Philippine Sports Commission, beating Kokkrachai for the gold medal will jack up the Philippine medal tally of two gold, five silver and six bronze medals.

To beat the highly favored Thai, Delarmino will need the same combative approach that propelled him to take all three rounds against Bayramdurdyyew, 30-27, Wednesday evening.

On attack mode right from the start, Delarmino tagged his rival with a jarring right to the chin that floored the Turkmen 20 seconds into the first round.

Following his stunning victory over Muhammetmyrat Gurbanow of Turkmenistan in the quarterfinals, Manatad saw his win streak end after a 5-0 defeat against Aidos Kulmanbetov of Kazakhstan in the men’s belt wrestling classic style -80kg category.