Kyrie Irving on opening night showdown vs. Cavs: ‘There's no pressure at all’ | Inquirer Sports

Kyrie Irving on opening night showdown vs. Cavs: ‘There’s no pressure at all’ 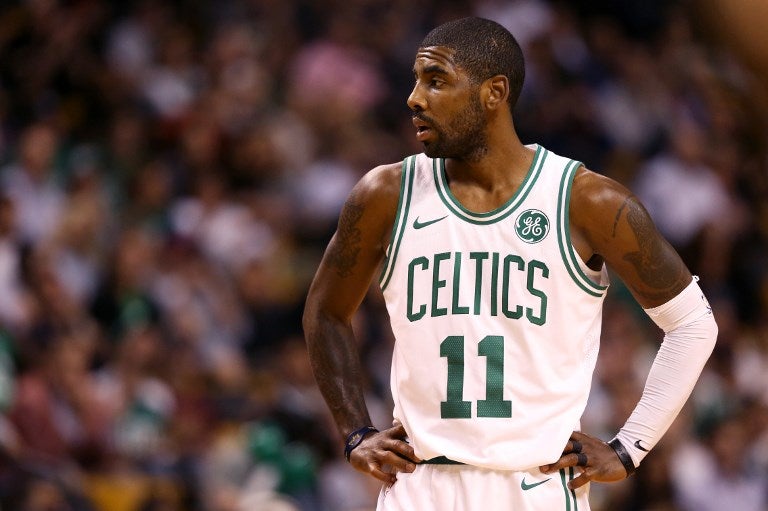 Kyrie Irving of the Boston Celtics looks on during the first half against the Charlotte Hornets at TD Garden on Oct. 2, 2017, in Boston, Massachusetts.  Maddie Meyer/Getty Images/AFP

With the much-anticipated opening night of the 2017-2018 NBA season just days away, basketball fans are already gearing up for the exciting match-ups in store.

But perhaps the brightest spotlight is saved for the Eastern Conference Finals rematch between the Boston Celtics and the Cleveland Cavaliers, who both will pit former teammates LeBron James and Kyrie Irving against each other for the first time.

Irving, of course, was shipped to Beantown this off-season, following his demands to get out of Cleveland and play elsewhere.

When asked if he’s anxious ahead of the monumental clash, the 25-year-old ball-handling savant said he felt no pressure at all.

“No. Why would it be? It’s just hoops,” Irving told Marc Spears of The Undefeated. “It’s just hooping. I understand the magnitude.”

Although he downplayed any personal attachments on his return to the Quicken Loans Arena, Irving understands the marketability of his impending match-up with his former team.

“I know what it is going to entail in terms of marketing, whatever the case may be, to garner up this energy to make people feel a certain type of way,” he said.

Still, Irving said he’d remain composed no matter what treatment he’d get from Cavs fans in the arena.

“It’s all love no matter what,” he said. “I have heard boos at times to hearing cheers in the parade. I’ve been in the championship parade as well as being down 30 in ‘Q Arena.’ So, I’ve heard it all. It’s just good to be there and hoop against a great team like the Cavs.”

The four-time All Star also once again thanked the entire city of Cleveland for his time, despite the circumstances surrounding his departure.

“I’m appreciative of (my career in Cleveland). The multiple legacies I want to live in my life, Cleveland is definitely part of one. Whether it’s appreciated or not, it doesn’t matter to me,” he shared. “I think the effect, the actual time I spent there, is what matters most and actually trying to be remembered for what happened.”  Khristian Ibarrola /ra