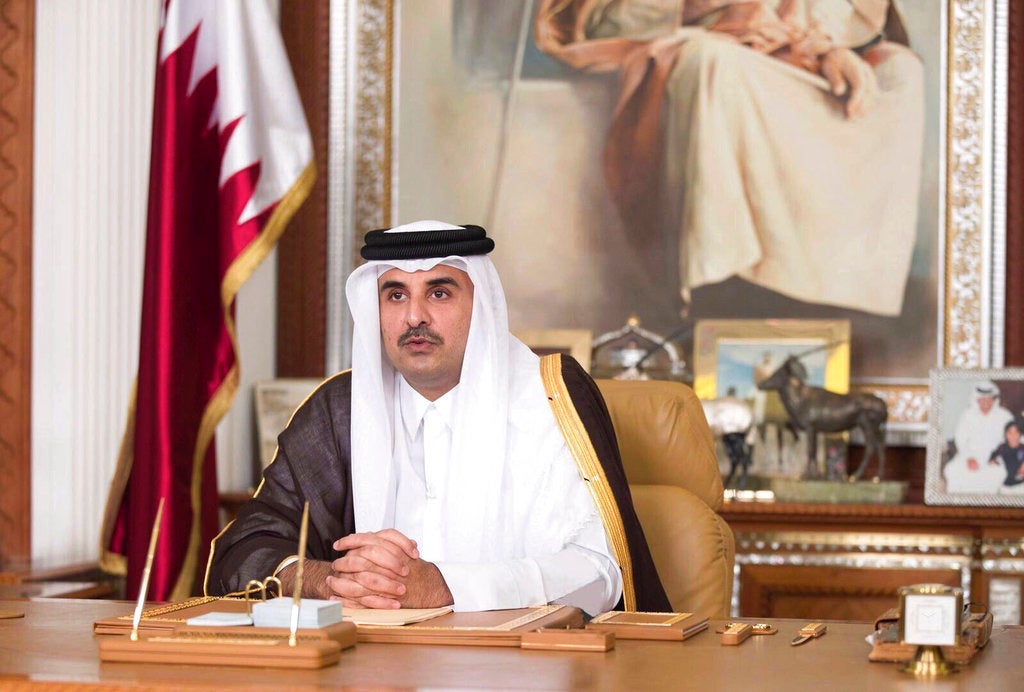 FILE- In this Friday, July21, 2017, file photo, Emir of Qatar Sheikh Tamim bin Hamad Al Thani talks in his first televised speech since the dispute between Qatar and three Gulf countries and Egypt, in Doha, Qatar. Qatar’s emir has warned against any military confrontation over the ongoing diplomatic dispute between his country and four other Arab nations, saying it will only engulf the region in chaos. (Qatar News Agency via AP, File)

LONDON — The unsolicited tweets started appearing on timelines over the last week. No website, company or individual is publicly associated with the accounts. But the message Twitter is being paid to promote and spread is clear: Qatar is an unsuitable host of the 2022 World Cup.

Twitter is cashing in from anonymous attacks on Qatar just as it faces scrutiny over the limited disclosure of information about political advertising in the 2016 U.S. election. Twitter leaders are testifying this week before congressional investigations looking into how social media networks provided a platform for Russian meddling.

The online assaults on Qatar promote the talking points amplified by the four Arab nations who in June cut ties with the first Middle East host of the World Cup. Bahrain, Egypt, Saudi Arabia and the United Arab Emirates all cut diplomatic ties and began a boycott of Qatar on June 5 over allegations that Doha supports extremists and has overly warm ties to Iran.

But the Twitter users who received the posts accusing Qatar of supporting extremism alongside images of World Cup preparations are offered no indication of the authors.

A promoted post from the QatarExposed account asks: “Why does the richest country in the world support terrorism?”

An accompanying video shows images from the soccer game between France and Germany in Paris in November 2015 that was targeted by suicide bombers as the narrator states: “Financing and promoting extremism has become state policy.” The sequence continues with footage of Qatar winning the FIFA vote in 2010. The video concludes saying: “Its sovereign neighbors have taken a stand, they won’t back down.”

A second account being promoted on Twitter, KickQatarOut, features similar branding — with the same typeface and header graphic — and also posted its first message on Oct. 20. With an illustration of a hand showing a red card, the account advocates calls for FIFA to strip Qatar of the World Cup and highlights concerns about conditions for migrant workers.

A promoted tweet claims there are “projections of 4,000 dead workers,” as Qatar hosts the World Cup.

“This is naked and embarrassing corruption,” another KickQatarOut tweet states, “it will destroy international football, for the sake of one country.”

The anti-Qatar Twitter accounts mirror the tone of other material put out by the Saudi American Public Relation Affairs Committee, a Washington-based influence firm run by Saudi citizen Salman al-Ansari. The committee, known as SAPRAC, has a $1.2 million contract with Bahrain to produce videos and material about “adversary countries in the Middle East,” according to filings with the U.S. Justice Department.

SAPRAC’s television and online ads include those targeting Qatar for hosting the 2022 FIFA World Cup. One of the Twitter accounts in question, QatarExposed, also retweeted material by The Qatar Insider, a website run by SAPRAC.

SAPRAC told The Associated Press that the QatarExposed and KickQatarOut accounts “are neither run nor are
they associated with SAPRAC in any way.”

Twitter declined to discuss the nature of the anti-Qatar promoted tweets and the lack of information about the holders of the accounts. The company only pointed the AP to plans to launch a “transparency center that will offer everyone visibility into who is advertising on Twitter, (and) details behind those ads.”

Twitter’s plans only reference requirements that “electioneering advertisers identify their campaigns,” and do not cover political operations not directly linked to an election.

Asked if it would be looking into the lack of transparency surrounding the QatarExposed and KickQatarOut accounts, Twitter told the AP: “We don’t comment on individual accounts.”