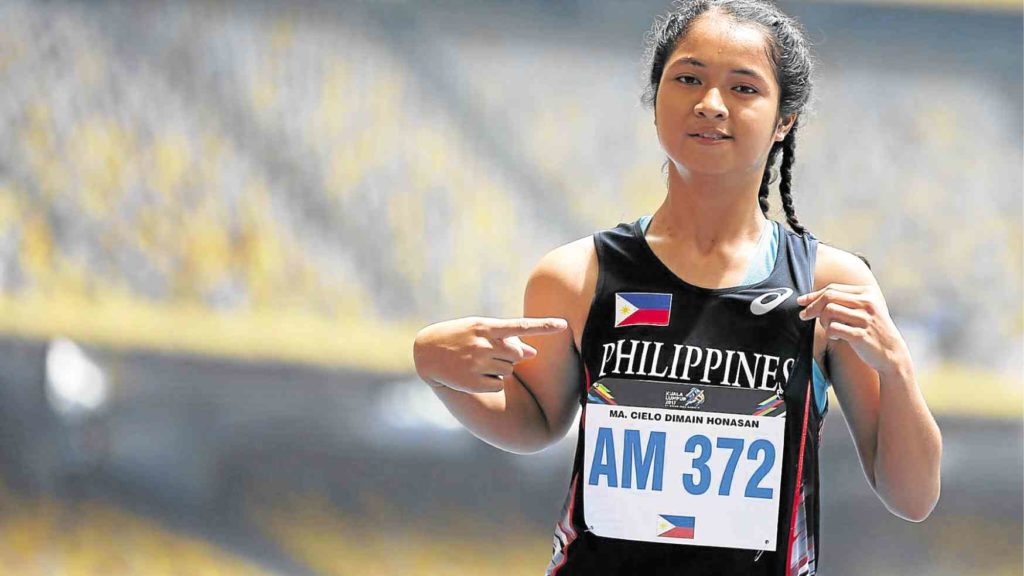 Her voice slightly quivered over the microphone. Still learning the ropes of public speaking, Cielo Honasan knows it will take time for her to shake off the nerves.

But the anxiety of speaking in front of a crowd—at that time in front of fellow athletes, coaches and the media—hardly compares to anything Honasan had gone through. This 16-year-old knew pain long before she got thrust into the spotlight as the breakout star of the Philippines’ campaign in the 2017 Asean Para Games.

Fighting the odds since birth, Honasan had gone through struggles, both the physical and emotional kind.

As a newborn, Honasan went under the knife. She needed immediate surgery due to a birth defect called gastroschisis, a condition where a baby’s intestines and stomach develop outside the body.

But Honasan’s health troubles didn’t stop there. She was also diagnosed with Beckwith-Wiedemann syndrome, a rare disorder characterized by overgrowth on one side or parts of the body. In Honasan’s case, it’s her right side that grew longer.

Growing up, she managed to deal with discomfort and pain. She learned to walk with a limp. And soon, Honasan had to deal with something else.

And Honasan only had her mother, Myra Dimain, to lean on as her biological father left them early on.

Over time, Honasan got used to walking—and running—with her left foot tiptoed. It made her limp less obvious, but the bullying didn’t stop.

“I felt like I have to prove something,” she said. “So when I saw that there was [an athletics] tryout in our school for a competition, I joined. That’s where it all started.”

Honasan was just 10 at that time when coaches discovered that she could run fast even against abled-bodied athletes.

“My family said I always loved running,” Honasan recalled. “Whenever I go home from school, I just walk or run to save money.”

Whether that really helped, she’s quite unsure. What’s certain was her disability came with a surprising gift of speed. And the hurtful experiences in the past also turned into fuel.

“Every time I remember those times that people looked down on me, that pushed me. That helped me develop,” said Honasan

One legend also inspired Honasan—Lydia de Vega, one of the country’s all-time greats who was Asia’s fastest woman in the 1980s.

“I haven’t had the chance to meet her, but I like searching things about her and watching her on YouTube,” said Honasan.

From local meets, Honasan started ruling the Central Luzon Regional Athletic Association (CLRAA) races that qualified her to the Palarong Pambansa, the annual sporting event that gathers the best student-athletes from all regions in the country.

Although she never reached the podium in the Palaro, Honasan impressed many as she proved that a differently abled athlete can keep up with able-bodied runners. And that’s where she also caught the attention of coaches, who endorsed Honasan to the Philippine Sports Association of the Differently Abled Athletes (Philspada).

“When they saw that I could compete against regular athletes, they asked if I wanted to compete outside the country [by joining the Philippine Para Team], and I said yes because I’ve always wanted to do that,” she shared.

Honasan’s international debut pitted her right away against Southeast Asia’s best in the 2017 Asean Para Games last September in Kuala Lumpur. And there, the 5-foot-6 rookie initially felt restless.

But on track, Honasan knew how to get the job done. In her first race, Honasan blitzed the field—including defending champion Nguyen Thu Thuy of Vietnam—to capture her first gold in the 200-meter race for T44 (a disability sports classification in one or both legs) with a time of 28.51 seconds.

“I knew I could do it,” the Grade 11 student said. “I felt I had an advantage because I’ve been competing against regular athletes.”

Honasan made it a double gold the next day as the Botolan, Zambales, native dethroned Vietnamese veteran Nguyen anew to rule the century dash with a 13.96-second clocking.

“Her times are Paralympic standard,” coach Joel Deriada said. Her time actually qualifies her for the Asian Para Games and the Paralympics.”

Expectations were high by the time she competed in the 400-meter race, but Honasan didn’t disappoint as she blew past rivals again with a time of 63.35 seconds to complete a golden sprint treble.

And it was at that moment when it finally hit Honasan how far she has come—there at the finish line where she sat down, before lying on her back, tears running down her face.

“I just couldn’t control my emotions that’s why I kept crying,” Honasan recalled. “Despite everything that happened, nothing stopped me from fighting and reaching my dreams.”

On some days, Honasan still sheds tears. As the new sensation of the Philippine Para Team, she gets to talk in front of more people to share her story of turning her disability into strength.

Honasan can’t help but feel emotional. But this time, just out of sheer happiness.