Jack Johnson once said: Don’t let your dreams be dreams. True enough, if you want to make your dreams turn into reality, you should set a spark to start a fire.

Four college level cheerleaders had this in mind when they were still in elementary as inspiration to achieve their dreams. From left, Lara Andrada, Rikki Obispo, Julianne de Vera, and Duanne Maala imitate the signature poses of their dream universities on their graduation day in 2015. PHOTO COURTESY OF RIKKI OBISPO

The four—Rikki Obispo, Julianne De Vera, Lara Andrada, and Duanne Maala—have been making noise on the internet after their throwback photos went viral, with 79,000 favorites and 12,000 retweets on Twitter as of writing.

Two years later, the black and white photo came to life as those high schoolers became cheerleaders of their dream universities. Andrada, Obispo, De Vera, and Maala recreate their high school graduation photo after the UAAP Cheerdance Competition on Dec. 2, 2017, as they fulfill their dream of being cheerleaders in De La Salle University, the University of Santo Tomas, University of the Philippines, and Ateneo de Manila University, respectively. PHOTO COURTESY OF RIKKI OBISPO

It was during their preparatory days in the School of the Holy Spirit in Quezon City when Obispo, De Vera, Andrada and Maala’s paths crossed. But they never became classmates. They only bonded after cheerleading practices. It took almost a decade before they enjoyed each other’s company.

None of them thought that after joining a pep squad in their fourth grade, they would make the strongest pyramid stunt created in the world of cheerdance. Over the years, the four become the squad goals that everyone dreams of having.

“We were schoolmates since prep pero hindi pa po kami close nun. Nagstart po talaga yung bond namin last 2009 kasi we share something we love to do which is cheerleading,” Obispo, who is now part of the UST Salinggawi dance troupe, said in a Twitter exchange with INQUIRER on Sunday.

Obispo, 3rd year BS Sports Science student, also shared that their friendship does not only revolve during training, but also extends outside the mats. What she is thankful for the most is having people by your side during life’s up and down moments.

“Being a student-athlete is not easy pero when you have your teammates and friends, yun po yung pinakamasayang challenge,” Obispo said.

“You could consider us best friends because we competed together for like 7/8 yrs. We even competed in ICU (International Cheer Union) Worlds in Orlando, Florida,” Maalala told INQUIRER in a separate Twitter conversation.

“I don’t know if you call that destiny. But cheer really brought us together and made us close with each other,” she said on Sunday.

The ICU Worlds could be considered as the Olympics of cheerleading and only holds competitions once a year, Maala, BS Management of Applied Chemistry student, explained.

As part of Team Pilipinas All Girl Elite group, the four got to experience in becoming bronze and silver medalists in 2014 and 2015 in their young age.

The blue blooded athlete clarified that it was only her, De Vera, and Andrada — the green archer cheerleader — who competed in 2014. During the 2015 competition, it was Maala, Obispo, and De Vera.

Obispo believes destiny brought them together.

“Without cheerleading, I’m sure that we wouldn’t be friends,” she said.

Their bond is unbreakable. They are each other’s strength and support system. Their story was a testimony that people could maintain their friendships even without seeing each other for months.

Obispo said that since third year high school, they already had dream universities. However, Iskolar ng Bayan cheerleader De Vera revealed that entering the four big universities in the country was not planned.

“It wasn’t planned. Talagang nagkataon lang and blessing na nabigyan kami ng chance to study in our dream schools,” she said in a private conversation.

De Vera, Obispo, and Maala admitted that it was hard leaving the team they had for almost seven years. The adjustment of having a new pep squad, De Vera said, was one of her struggles as she moved out of high school life.

“Since we have the same circle of friends, kami-kami talaga magkakasama ever since so mahirap talaga isipin na when we step into a new chapter we won’t see each other as much anymore,” De Vera, a fighting maroon, said.

Despite this, Maala said they were more focused on their future.

“Our focus was on what’s ahead of us, not what we were leaving behind (referring to the school). And we pretty much knew that we’d still remain friends during college, so we didn’t really ‘leave’ each other,” she said.

Obispo said that because of their academic and training schedules, hang outs were now less compared to their high school days. None of them could even watch each other’s games.

However, when time permits, the four hang out at their usual place at The Rock in Don Antonio Heights. Obispo said that it had a significant place in their lives because they always went there after training or class in high school. 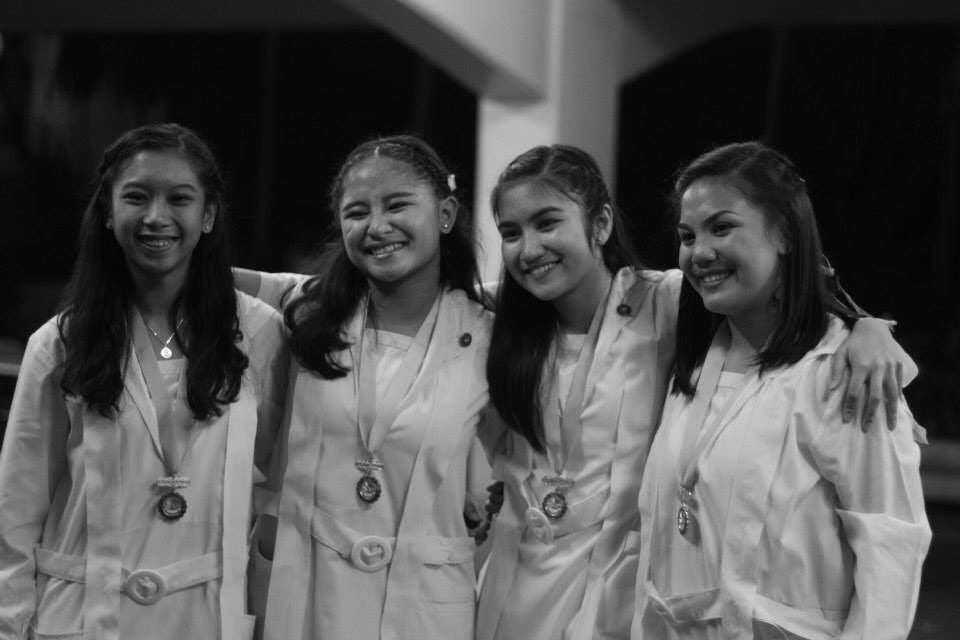 Andrada, Obispo, De Vera, and Maala smile for the camera on their last day as high schoolers at the School of the Holy Spirit in Quezon City. PHOTO COURTESY OF RIKKI OBISPO

Despite the rivalries between ADMU, DLSU, UST, and UP, Obispo said they have no personal rivalries.

“As a cheerleader, we don’t see our competitors as rivals but as our friends who cheer for each other. That’s what cheerleaders do,” Obispo said. High school friends (from left) Lara Andrada, Rikki Obispo, Julianne de Vera, and Duanne Maala now cheer their hearts out as part of the top four universities in the country. Photo taken on Dec. 2, 2017, after the UAAP Cheerdancing Competition at the SM Mall of Asia Arena. PHOTO COURTESY OF RIKKI OBISPO

Maala said being competitive was inevitable during the game, but they do not let it affect the friendship that the four of them have.

“This rivalry/tension, doesn’t really bring out hostility, rather it makes us strive to perform at our best. Outside of competition, it doesn’t get in the way of friendship,” she said.

De Vera attests to this by saying that their friendship is more important than the rivalry between their schools.

“I don’t think rivalries between our schools would ever affect our friendship because mas mahalaga ang mga pinagsamahan namin and in the end we will need each other more than anything or anyone else so why would we let school rivalry get in the way of our friendship,” she claimed.

When asked for their message to one another, the three of them had a common one: I’m proud of you

“I know na masyado tayong busy ngayon, pero always remember na I’m so proud of you all and I’m always here for you guys! Let’s keep on working and achieve our goals. I hope we could cheer again as teammates hehe love y’all,” Obispo, the Thomasian, said.

“Hey girls, I’m glad we made it. I know it wasn’t an easy journey for all us. Thank you for not giving up. I’m beyond proud of all of you!” De Vera, the Iskolar, said.

“I just want to tell them that, i’m really proud of youuu! and we finally made it!! next year ulit? Haha,” Maala, the Atenean, said. /cbb