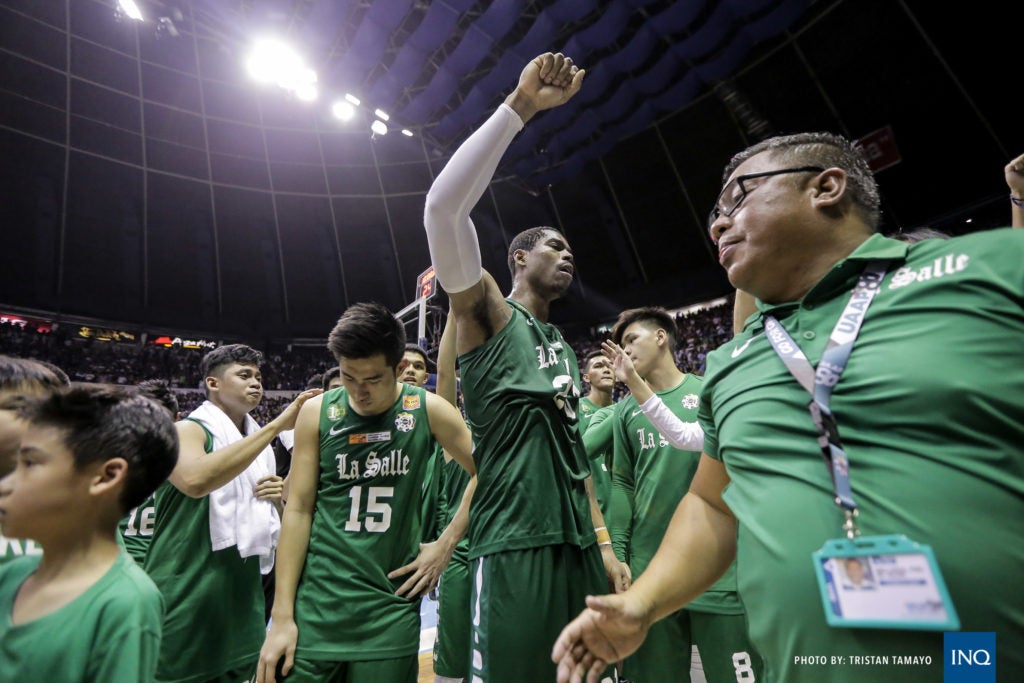 After two dominating years in the UAAP, the Cameroonian center has announced that he is bidding the Green Archers goodbye.

In a lengthy status posted on his Twitter account, Mbala announced his farewell and closed the chapter on his amateur career which saw him net two UAAP Most Valuable Player awards with La Salle.

“After five years, two incredible UAAP seasons, and, of course, countless unforgettable memories, it is with a heavy heart that I announce that the time has come for me to move on from De La Salle University and the Green Archers,” he wrote.

“I want to publicly thank boss ECJ (Eduardo Cojuangco), the managers, coach Aldin (Ayo), the rest of the coaching staff, and my teammates for all the incredulous opportunities that I have been given during my time there. You all have made my time in the Philippines truly worthwhile.”

Mbala will turn pro as he was signed by Mexican ballclub Fuerza Regia in Monterrey, Nuevo Leon where he will serve as the team’s import in Liga Nacional de Baloncesto Profesional.

“I know my choice might come as a surprise to many, and I have to admit, the decision to leave was the toughest I have had to make after being with La Salle for so many years, but I feel that this decision is best for the next stage in my career and development,” he wrote.

After his impressive stint with the Southwestern University Cobras, the 6-foot-8 slotman transferred to Taft and immediately brought tons of promise but had to serve a three-year residency period, one of which was due to his participation in a tournament in General Santos City.

But when he finally took the court, Mbala proved to be good as advertised, tearing the house down and averaged 20.6 points on 54.6 percent shooting to go along with 16.0 rebounds, 2.4 blocks, and 1.4 steals to lead the Green Archers to the UAAP Season 79 championship.

That performance earned him a spot in the Cameroonian national basketball team as Mbala led his home nation to the quarterfinals of the 2017 Afrobasket.

His obligations with the national team caused him to miss two games in Season 80, but that still couldn’t stop him from norming 26.0 points, 13.1 rebounds, and 2.5 blocks this past season. La Salle, however, finished runner-up to Ateneo this time out.

Mbala said that he will forever be grateful for the opportunity to don the green-and-white.

“I am truly grateful for having had the opportunity to represent the Green Archers and will always be La Sallian at heart,” he ended.

Mbala’s departure ends the looming controversy regarding his eligibility for UAAP Season 81 next year, with the Board set to revisit the “seven years out of high school” rule.

His presence will also leave a big hole for the Green Archers up front with Abu Tratter also graduating from the squad.