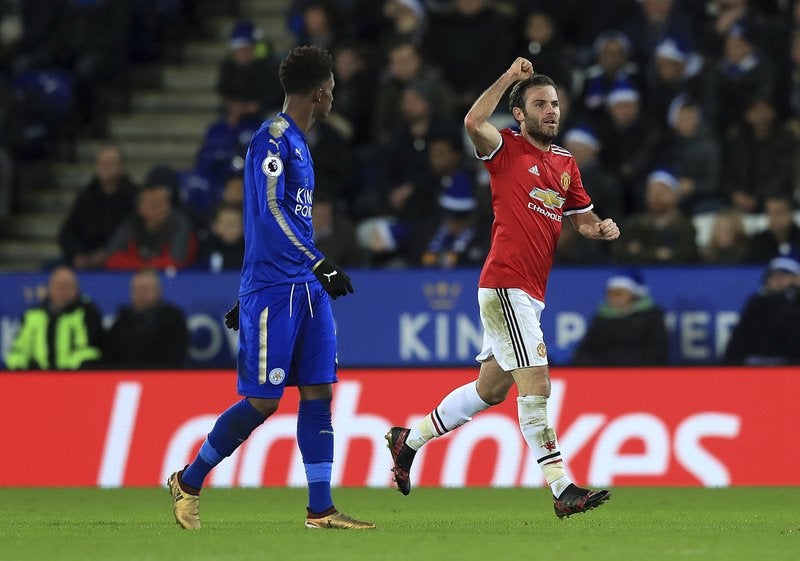 The performance was “childish.” Players lacked intelligence and showed “no maturity.” There were “joke chances” missed before collapsing to draw 2-2 that further imploded United’s faint title hopes.

The title race already appears over with half the season to play, and Mourinho is not happy with how a 2-1 lead was thrown away after Juan Mata scored twice.

“I think childish in their box and childish in our box … mistakes plus mistakes,” Mourinho said at King Power Stadium.

The warning signs were there in the 27th minute when United was foiled by the one thing teams know to prepare for against Leicester — a counterattack.

Jamie Vardy played a part in starting the intelligent move before completing it with the opener.

Deep inside his own half, Vardy passed to Demarai Gray who launched the ball high over the United defense. Riyad Mahrez sprinted onto the ball, held off defender Chris Smalling and then stalled to wait for the overlapping Vardy to arrive in the penalty area. The striker was well placed to receive the pass from Mahrez and net his 50th Premier League goal.

Juan Mata did spearhead a recovery by United, slotting in the equalizer five minutes before halftime after being teed up by Jesse Lingard.

Although Mata netted again from a free kick on the hour, the visitors should already have been in front. Anthony Martial squandered a chance when he blazed over, and a later miss was more glaring from Lingard.

After being released by Romelu Lukaku, Lingard rounded goalkeeper Kasper Schmeichel and managed to hit the post despite having an open goal to put United 3-1 up.

United couldn’t even exploit Leicester going a man down in the 73rd minute when substitute Daniel Amartey was booked for the second time in four minutes.

And just as he was for the opener, Smalling was at fault again when Leicester stunned United with virtually the last kick of the game.

Maguire got ahead of opposing defender Smalling at the far post to latch onto Marc Albrighton’s cross and stretch out his right leg to put the ball into the net.

“In the end no maturity because Smalling was in trouble,” Mourinho said. “They put in the last minute Maguire (up front) as an extra man, the players on the pitch cannot react to that and analyze the game and make a quick adjustment.”

It was a further blow for Mourinho after United was eliminated from the League Cup on Wednesday by second-tier Bristol City.

“I cannot stop the game and give a team talk,” Mourinho said. “For the last two minutes the players had to immediately adapt, to read the game, which they didn’t.”