From Port Area to icy Austria 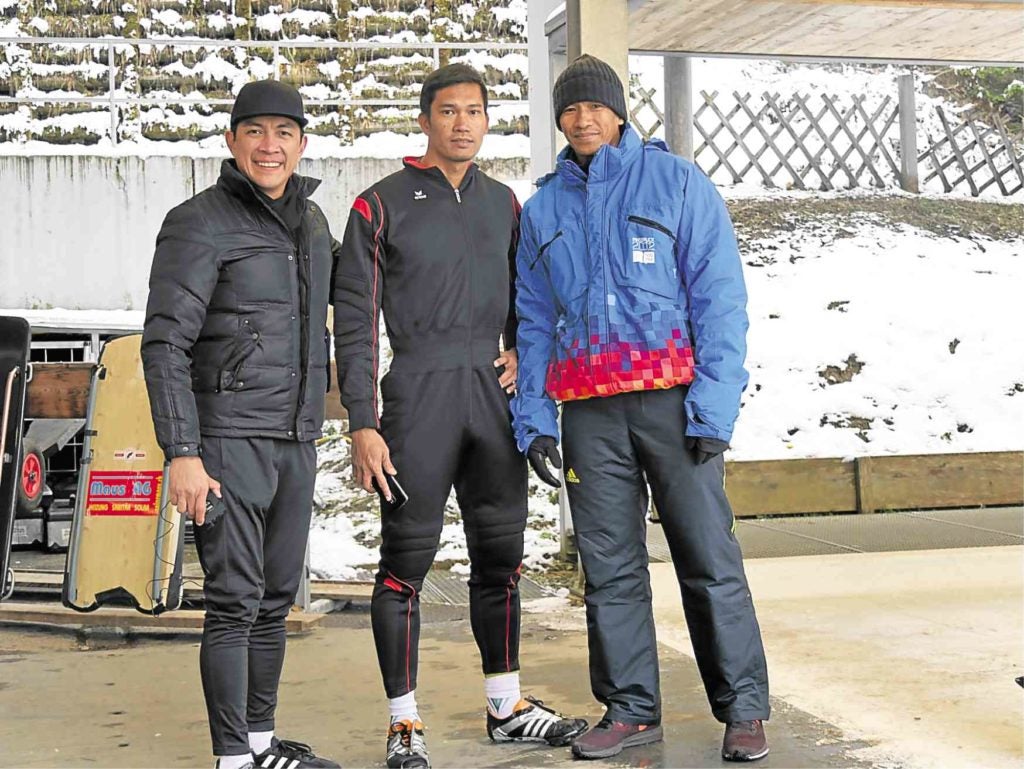 In just two months, both enlisted personnel from the Philippine Coast Guard learned a new sport, trained overseas and stayed in perfect shape.

Come Jan. 5, they will plunge into action against some of the world’s best.

Isidro and Dela Cruz, the pioneering pair of the Philippine bobsled team, started with virtually no knowledge about the sport but must show mastery when they debut in the 2018 Europa Cup at Igls, Tirol in Austria.

“It’s very historic as it will be the first time that Filipinos, or anyone from Southeast Asia, will compete in an international bobsled competition,” said Thelmo Cunanan Jr., president of the recently formed Philippine National Bobsled, Luge and Skeleton Association, Inc. (PNBLSA).

“We felt that Filipinos and Asians could excel in the sport if given the chance,” he added. “There are others (teams from tropical countries) who have done it like the Jamaicans.”

It was an opportunity too hard to pass up. OlympiaWorld Innsbruck, the top sports authority in Tirol, had offered to train Filipinos, provide technical assistance, equipment, as well as board and lodging.

“OlympiaWorld has been very generous,” said Cunanan. “It’s the first time they’ve done this, to reach out to an Asian team because they wanted to promote the sport of bobsledding in Asian countries.”

The incredible offer required Isidro, a seaman first class, and Dela Cruz, a seaman second class, to live in Austria not just to train and compete, but also gain enough expertise to introduce bobsled in the Philippines.

“The people coaching them are former world-class athletes and experts so they’re receiving the best training possible,” said Cunanan.

But how can a country like the Philippines that has no snow, more so a bobsled track—a long, curvy ice canal where sledders race for the fastest time—produce standouts?

“If you think about it, the guys from other countries also can’t bobsled during the summer months,” said Cunanan.

“All the physical training happens from March to November and it’s only from November to February that actual bobsledding happens,” Cunanan explained. “The challenge, of course, is getting our athletes overseas in winter. But in between, all the athletes really do other things—they do other sports, they do cross training, physical conditioning. That’s why we think bobsledding has a future in the Philippines.”

Everything has been well thought, apparently, including the selection of the 36-year-old Isidro and the 25-year-old Dela Cruz. Both strapping at 5-foot-10, the duo had to go through a rigorous process before nabbing the rare opportunity.

Isidro’s other role as mentor of the volleyball team of the Coast Guard, which is based at the South Harbor of Manila’s Port Area, also worked to his advantage.

“We got someone who’s older and has coaching experience because we want to develop the sport in the Philippines,” noted Cunanan.

“They were taught everything,” added Cunanan. “They have to know how to put [the sled] together, how it works, how to take it apart.”

The 2018 Europa Cup is an annual event organized by the International Bobsleigh and Skeleton Federation (IBSF).

“It’s their first major international competition and some [of their opponents] are also competing in the Olympics,” said Cunanan.

For the team, it’s the long-term results that matter more.

“Our ultimate objective is to make it to the Winter Olympics in 2022,” said Cunanan. “We have made the first step. There is still a long journey ahead.”