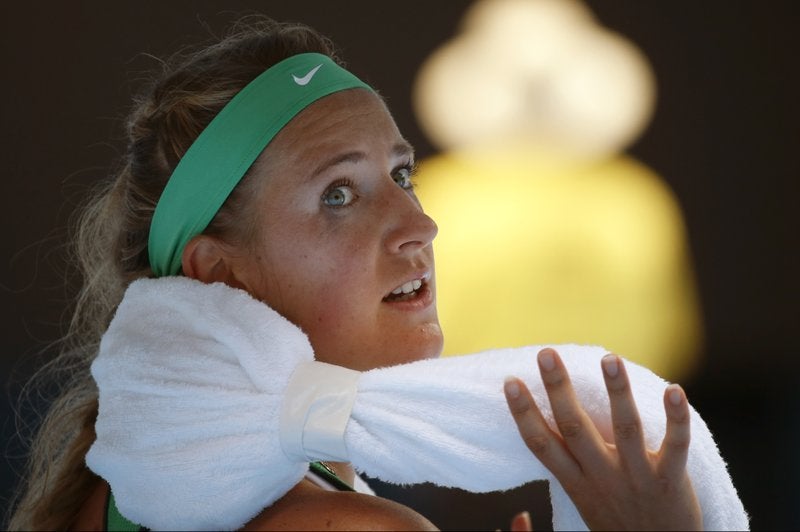 FILE – In this Jan. 27, 2016, file photo, Victoria Azarenka of Belarus wraps an ice towel around her neck during a break in her quarterfinal match against Angelique Kerber of Germany at the Australian Open tennis championships in Melbourne, Australia. Two-time champion Azarenka has withdrawn from the 2018 Australian Open, with her wildcard entry to the season’s first major reallocated to Ajla Tomljanovic, Australian Open organizers announced in a social media post Monday, Jan. 8, 2018, a week before the tournament begins. (AP Photo/Vincent Thian, File)

MELBOURNE, Australia — Two-time champion Victoria Azarenka has withdrawn from the Australian Open, with her wildcard entry to the season’s first major reallocated to Ajla Tomljanovic.

“It’s unfortunate that (Azarenka) is unable to travel to Australia this year,” organizers posted on Twitter, quoting tournament director Craig Tiley. The Australian Open, “is her favorite tournament and she’s looking forward to returning to Melbourne next year.”

Azarenka, who won the Australian Open in 2012 and 2013, has been involved in a custody dispute involving her son Leo, who was born last Dec. 19.

She hasn’t competed anywhere since Wimbledon, where she lost to Simona Halep in the fourth round on July 10.

Former No. 1-ranked Azarenka played only six matches in 2017 and her year-ending ranking plummeted to No. 208.

Australian Open organizers last month granted her a wildcard entry, with Tiley saying at the time, “Vika’s current situation is obviously very difficult for her and we have reached out to offer any support we can.”

Azarenka had initially been scheduled to make a return to competitive tennis in New Zealand last week, but withdrew from that tournament as well.

The Australian Open starts next Monday at Melbourne Park. Defending champion Serena Williams has already withdrawn, saying her game wasn’t back to a level where she believed she could contend for the title just four months after giving birth to her first child.