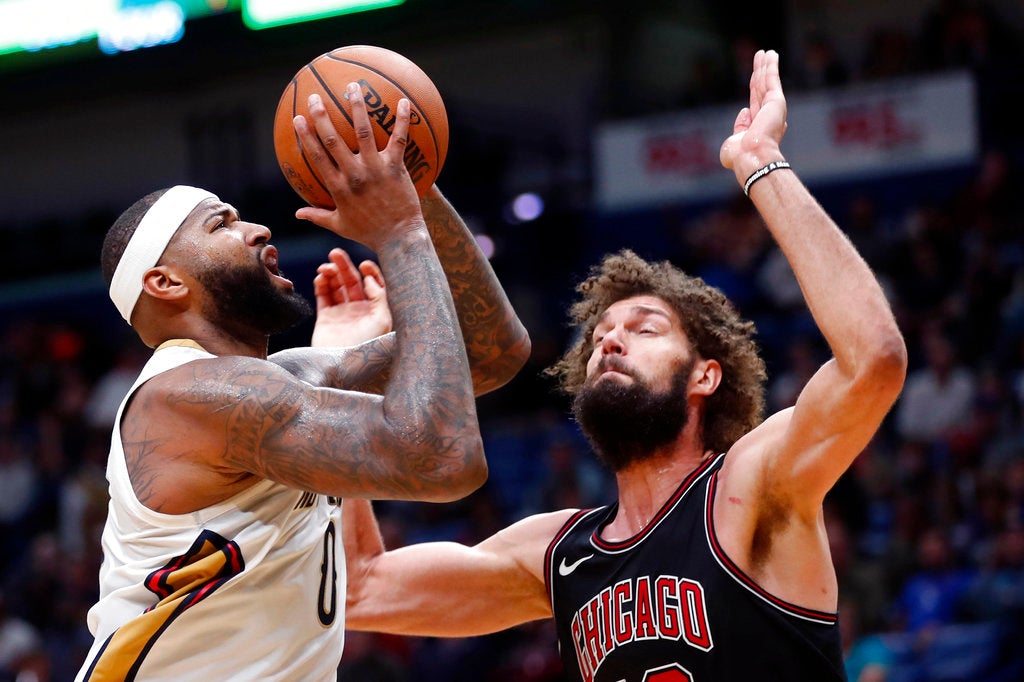 NEW ORLEANS — DeMarcus Cousins considered the most impressive statistical night of his career and only half-jokingly asserted that he was most proud of the stamina he needed to log a career high of more than 51 minutes on the court.

Cousins had 44 points, 24 rebounds and 10 assists, Anthony Davis scored 34, and the All-Star pair led a 17-point New Orleans comeback in the final five minutes of regulation before the Pelicans pulled out a 132-128 victory over the Chicago Bulls in double overtime Monday night.

“My strength coach had the nerve to ask me, do I want to lift after this game? I almost lost it. If I had some energy, we would have fought,” Cousins said. “I’m just glad it’s over. Seriously. I think (the Bulls) feel the same way, too.”

In between several moments of brilliance in the second overtime, Cousins’ body language suggested he could barely stand. His feet hardly left the floor on a 3-pointer that rolled around the rim and in. He also managed to hit a turnaround jumper and calmly made two free throws to ice the game with eight seconds left.

Davis, who fouled out in the first overtime, called Cousins’ performance “legendary,” adding that his fellow big man — more than anyone — earned the day off from practice the Pelicans were given on Tuesday.

When the game was finally over, an excited Davis jumped on Cousins and wrapped his arms around his neck.

“He played his heart out,” Davis said.

Cousins became the first NBA player since Hall of Famer Kareem Abdul-Jabbar in 1972 to have as many as 40 points, 20 rebounds and 10 assists in a game, according to the Elias Sports Bureau. Few others have done it.

Cousins’ assists included alley-oop lobs to Davis and a couple of long passes to him for breakaway baskets.

“You dream about moments like that as a kid — a game coming down to the line and just making big plays down the stretch,” Cousins said. “I think we just willed our way through this game.”

And yet Cousins’ heroics nearly never happened. Even after the Pelicans’ stunning 23-4 run in the last five minutes of regulation gave them a 114-112 lead on Davis’ free throws with 3.2 seconds left, Chicago’s Justin Holiday was fouled by Darius Miller attempting a 3-pointer in the final second of the period.

“It wasn’t meant to happen,” Holiday said. “I had the opportunity. I don’t miss free throws. Obviously after the game we can talk about things we did wrong, but when we get an opportunity like that, that’s what is on my mind right now.”

After Holiday had swished the second free throw, Davis recalled, “I looked at DeMarcus and we both just shook our head with sad faces, like, ‘We had this one.’

Jerian Grant had 22 points and 13 assists, and Robin Lopez also scored 22 for the Bulls, who appeared well on their way to their fifth victory in six games when they opened the fourth quarter with a 23-5 run to take their largest lead at 104-86.

“A lot of good things and obviously we had a chance to win it at the end,” coach Fred Hoiberg said. “A lot of things we can learn as well and grow from.”

Pelicans: E’Twaun Moore scored 15 points, including a 3 in the second overtime to help the Pelicans win for the fifth time in six games. …. Often guarded by his brother, Jrue Holiday had one of his lowest recent scoring totals, with 12 points, after averaging 25.6 points in his previous five games. … Miller scored 10 points. … Won despite shooting only 41.6 percent (47 of 113).

Markkanen tied it with a driving layup before Davis and Justin Holiday each hit two free throws in the final seconds.

New Orleans had a chance to win at the end of the first overtime, but Ian Clark’s 3-point attempt was short and Jrue Holiday’s rushed putback also rattled out.