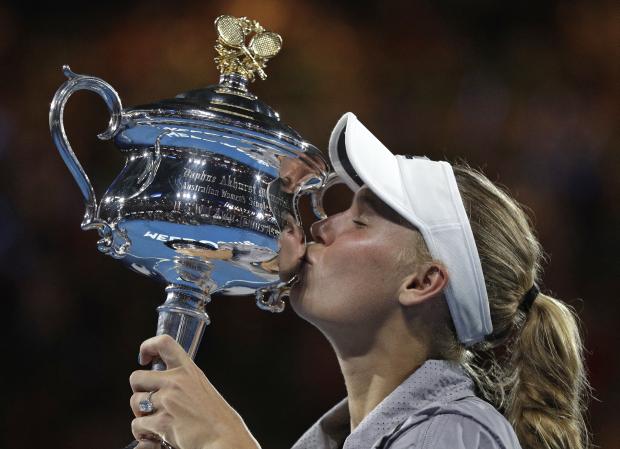 One of the first things she did as a champion was apologize to top-seeded Simona Halep following her 7-6 (2), 3-6, 6-4 win in the Australian Open final on Saturday night.

“I’m sorry, I’m just taking a second to hug Daphne,” Wozniacki said, pausing as she clutched the winner’s trophy in the on-court ceremony. “I dreamt of this moment so many years, to be here now it’s a dream come true.”

More than seven years after appearing in her first Grand Slam final at the 2009 US Open – a straight sets loss to Serena Williams – Wozniacki can finally erase the “but never won a major” footnote that has long been attached to her resume.

“I’m never going to get the question again about being a world No. 1 without a Slam,” she said after leaving the court.

Wozniacki will regain the top ranking next week for the first time in six years – beating Serena Williams’ record of 5 years, 29 days between stints at No. 1 on the women’s tour – in another benefit of beating the top-seeded Halep.

Wozniacki lost two US Open finals – in ’09 and 2014 – and Halep lost two French Open finals before their meeting at Melbourne Park.

It was the first time in the Open era that players ranked No. 1 and 2 were meeting in a major final without either having won a Grand Slam title.
So the pressure was on.

It was the first time in the Open era that both Australian Open finalists had saved match points before reaching the final, also, so in some ways the pressure was off.

Wozniacki saved match points in her second-round win over Jana Fett and later said she was relaxed because for the rest of the tournament she was “playing with the house money.”

So both players rolled the dice in the 2-hour, 49-minute final, which featured some long, absorbing rallies and 10 service breaks – including six in an eight-game run in the third set.

“I know that today is a tough day,” Wozniacki said to Halep. “I’m sorry I had to win today but I’m sure we’ll have many matches in the future. Incredible match, incredible fight. And again, I’m sorry.”

Halep was playing with an injured left ankle, needed treatment for dizziness in the second set and had rallied from a break down in the third set to lead 4-3 when Wozniacki took a medical time out to have her left knee taped. In the end, she just ran out of steam.

“It’s not easy to talk now,” Halep said at the presentation. “It’s been a great tournament for me. I started not very well with the ankle injury. I just wanted to give my best every match, which I did. Of course I’m sad I couldn’t win today but Caroline was better than me. Sad that I couldn’t make it the third time, maybe the fourth time will be with luck.”

Serena Williams, who beat her older sister, Venus, in last year’s final, took time out for her pregnancy and the birth of her first child in September, and is preparing to return to competition next month.

Wozniacki got a break in Halep’s first service game and had a chance to serve for the first set at 5-3, but the Romanian rallied to break back and to force a tiebreaker. After getting an early jump in the tiebreaker, Wozniacki won the last three points to win a set for the first time in a Grand Slam final.

Halep fended off four break points to hold early in the second set, and called for the trainer after holding in the fifth to get her blood pressure and pulse taken.

She returned and broke for a 5-3 lead before leveling the match.

The players had a 10-minute break between the second and third sets with the temperature at 30.5 Celsius (87 Fahrenheit) and 60 percent humidity.

Wozniacki appeared to sense Halep’s fatigue and attacked hard, getting a break in the second game.

Halep converted her sixth breakpoint chance when Wozniacki double-faulted for the first time in the set. It was 2-1.

There was a total of four straight service breaks until Halep held and got on level terms. She broke Wozniacki for a 4-3 lead, but lost momentum after Wozniacki’s medical time out.

“I can still smile. It’s fine. I cried, but now I’m smiling,” Halep said. “Is just a tennis match in the end. But, yeah, I’m really sad I couldn’t win it. I was close again, but the gas was over in the end.”

Serena Williams didn’t watch the game, saying she gets too nervous, but tweeted to congratulate her good friend Wozniacki.

“New number one and aussie open champ. So awesome. So happy. Are those tears? Yup they are. From a year ago to today I’m so proud my friend so proud.”