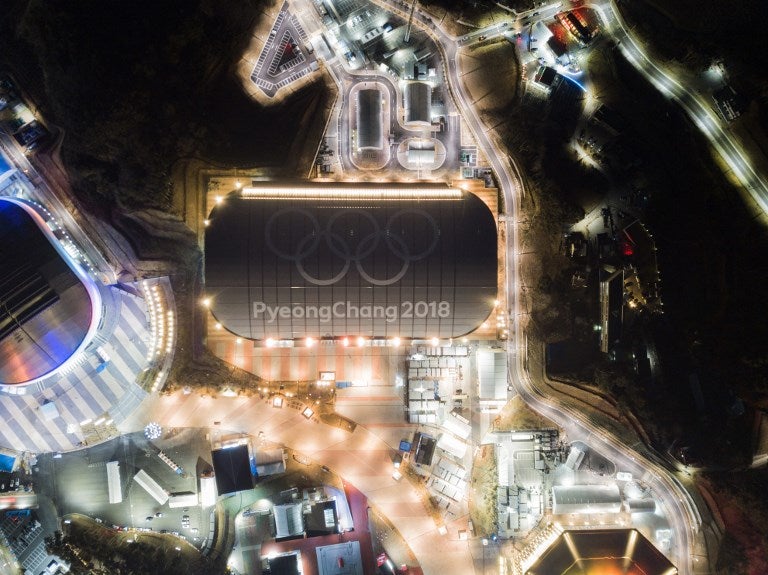 A general view shows the Olympic rings on the roof of the skating venue of the 2018 Pyeongchang winter Olympics in Gangneung on February 3, 2018. / AFP PHOTO / Ed JONES

Olympics chief Thomas Bach on Monday said the Pyeongchang Winter Games brought “real hope” to the divided Korean peninsula and conceded there was no “Plan B” even when nuclear tensions put them under threat.

Bach was speaking four days ahead of the opening of the Games, which received a major boost when isolated North Korea ended months of bellicose posturing by agreeing to send a contingent of athletes.

“The Olympic Winter Games Pyeongchang 2018 have allowed another new beginning on the Korean peninsula,” Bach told delegates at the opening ceremony for this week’s International Olympic Committee (IOC) session.

“The Olympic spirit has brought two sides together that for too long were divided by mistrust and animosity.

“The Olympic spirit has brought real hope for a brighter future for everyone on the Korean peninsula.”

Bach said it had been a “long and difficult journey” to organise an Olympics in Korea, whose two sides are divided by a heavily fortified border — just 30 miles (50 kilometres) from the Games site — and remain technically at war.

Officials from France, Germany and Austria all expressed concerns about sending athletes as tensions spiralled last year, when North Korea fired a series of missile tests and exchanged threats of war with the United States.

But Bach said: “In all the conversations we had, the Olympic Winter Games Pyeongchang 2018 were never put in doubt. On the contrary, we could always feel support.”

“Despite the sometimes worrying political circumstances, we were always standing at the side of our Korean hosts and never talked of a Plan B,” he added.

South Korean President Moon Jae-In has long argued for engagement to bring the North to the negotiating table over its nuclear ambitions.

But not all of his countrymen agree and there is a public perception that Moon’s administration made too many concessions to the North to secure its participation at the Olympics.

Chiming with Bach, Moon said: “Something truly wonderful is taking place in the divided and war-torn nation… throughout the world the message of peace is echoing.”

“One or two months ago, many countries were concerned with the safety of the Pyeongchang Olympic Games. North Korea’s participating in the Games and a unified team under the banner of peace seemed like an impossible dream then,” he added.

North Korea is sending 22 athletes to Pyeongchang, along with a large number of officials and an all-female cheer squad.

A unified Korean women’s ice hockey team, whose squad includes 12 players from the North, on Sunday made its debut ahead of the Games, losing 3-1 to Sweden in a practice match.

The team has proved polarising in South Korea, where it has been blamed for a sudden drop in Moon’s approval ratings.

While enthusiastic supporters cheered on the joint team, protesters chanting “Pyongyang Olympics!” also gathered outside, stamping on a picture of North Korean leader Kim Jong-Un and ripping up the blue-and-white Korean unification flag.