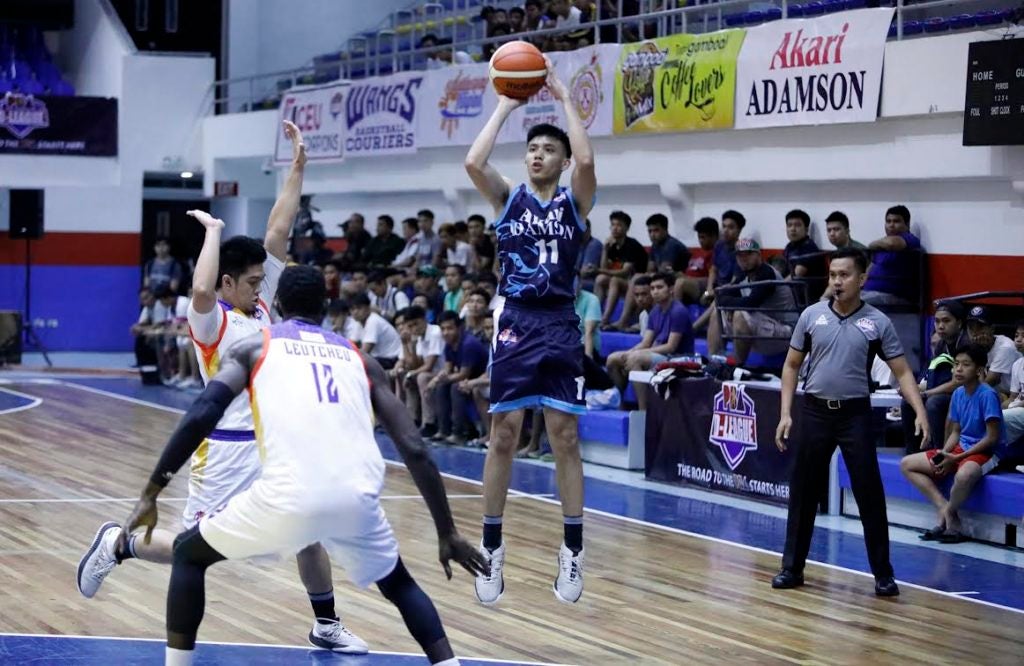 It seems like coach Franz Pumaren didn’t really need much time to find a replacement for Sean Manganti.

Left looking for someone to plug in the small forward position left by the senior high-flyer, Pumaren may have stumbled upon a gem in Jonathan Espeleta with the incoming third year ashowing signs of promise.

The Fil-Am swingman on Tuesday showed a glimpse of what he can do, lighting up for Akari-Adamson with 19 points in the first quarter in the team’s 98-92 victory over Go for Gold in the 2018 PBA D-League Aspirants’ Cup.

Given the keys to the starting role, Espeleta made Pumaren look like a genius, leading his crew with 24 points, on an efficient 8-of-11 shooting from the field, while also grabbing five rebounds and two steals.

“The first time I took over Adamson, I really felt that he has a lot of potential. He has the PBA potential, but he just has to be in a better shape,” remarked the Falcons coach.

The 21-year-old, though, shrugged off the praise and noted that his early explosion wouldn’t be possible if not for his teammates helping him as Akari-Adamson rode his blistering hands early.

“My teammates were just trying to find me cause I was hot I just had to keep shooting. They just happened to fall in,” he said as he went on a perfect 3-of-3 sniping from threes.

Expected to take a bigger responsibility for the Falcons this upcoming collegiate season, Espeleta isn’t putting much pressure on himself or to even fill up the absence left by Manganti as he hopes to continue being a part of something great under the tutelage of Pumaren.

“We know what were capable of doing. All of us are just looking to contribute every night,” he said. “There’s no star player. We’re just playing as a team.”

Read Next
Win-win situation for Macaraya as CEU, San Sebastian thrive in D-League
EDITORS' PICK
House energy committee chair Arroyo bats for cheap electricity
UK’s Boris Johnson will resign, BBC reports
Unemployment rate up to 6% in May
Geek out at TOYCON 2022 powered by Smart Signature
High inflation: Your P1 is now worth only 87 centavos
High-risk pregnancy: Reducing your risk is in your hands
MOST READ
Suspect in grisly killing of missing woman in Bulacan arrested
Kim Atienza’s daughter flaunts bikini body in response to critics of her ‘revealing photos’
Japanese artist who created ‘Yu-Gi-Oh!’ found dead in the sea
FDA probes popular Filipino noodle brand for ‘high level of ethylene oxide’
Don't miss out on the latest news and information.