It’s been just two weeks but it doesn’t mean drama hasn’t already shaped on the surface of the UAAP Season 80 women’s volleyball tournament.

National University and defending champion De La Salle are unblemished after five match days, Ateneo managed to escape a winless week, and University of Santo Tomas has stumbled into a rough path due to injuries to Rica Rivera and Milena Alessandrini.

Enough introductions, here are the seven best players of Week 2.

It’s hard to argue with perfection, and NU has been nothing but perfect heading into the season.

In the middle, literally, of the Lady Bulldogs’ 3-0 start is their towering captain Jaja Santiago.

And in the two NU wins this week, Santiago has been nothing short of spectacular averaging 24.5 points a game and becoming the second leading scorer in the league in terms of total output.

Not only is Santiago scoring at a high rate, she’s doing it at an efficient way converting 53 percent of her spikes.

And if Santiago was a mere “what if?” in last week’s rankings after producing just 16 points, she proved that it’s just a flick of the switch to turn her passivity to offensive volatility. 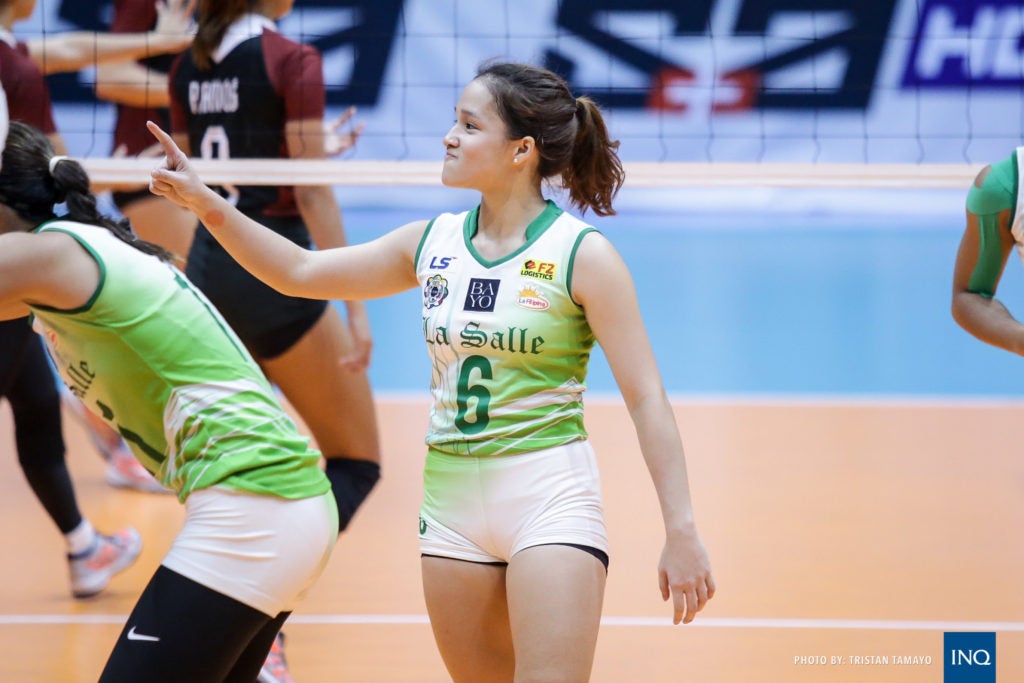 A player with a narrative attached to her name is always a terrific story angle, and Michelle Cobb is just that.

The 18-year-old Cobb became the unsuspecting heir to one of La Salle’s greatest players ever.

From the moment Cobb was named the starting setter for the defending champions, she immediately drew comparisons to Kim Fajardo.

And in the Lady Spikers’ shutout win over University of the Philippines, Cobb wanted everyone to know she will make her own legacy through her own style and through, as fate would have it, heroism.

La Salle improved to 2-0, and in the lone game the Lady Spikers played this week Cobb had 10 points, seven service aces, and 32 excellent sets. The charming Galanza, who played her first game after her right ankle injury in the offseason, scored just six points that barely inspired her teammates to battle back against the Lady Bulldogs.

To put things in perspective, Galanza’s 26 points is the second-highest scoring output, tied with Santiago against Ateneo, so far this season.

Adamson, now at 1-1, is now on pace to exceed its record from last year as the Lady Falcons didn’t get their first victory in Season 79 up until the final game of the eliminations. Cherry Rondina just became the “What if?” player of this week.

UST split its two games this week and is now at 1-2 overall, but what if the Golden Tigresses won both games? The answer, Rondina could’ve been the No.1 player.

The Cherry Bomb does not have the same efficiency as Santiago, Rondina is at 42 percent in her spiking conversion, but UST’s skipper knows how to put points on the board.

Dawn Macandili is undoubtedly the best libero in the UAAP right now.

Her mere presence alone changes offensive schemes opposing teams have planned for against La Salle, and Macandili’s uncanny intimidation was on display when the Lady Spikers took on the Lady Maroons.

UP almost made a conscious effort to target everybody except Macandili during its serves.

It was Desiree Cheng who registered the most excellent receptions for La Salle with seven and Macandili’s name didn’t even pop up in the reception box.

Macandili’s motor was in overdrive against UP that she even ducked underneath the net, crossing over to UP’s side of the floor just to keep the ball in play.

Jasmine Nabor is the Robin to Santiago’s Batman.

Santiago, for all her prowess, still needs someone to toss her the ball and that’s what Nabor has done with the greatest of ease so far in this tournament.

It’s almost an automatic point for NU whenever the two stars connect and Nabor, for this week, averaged 34.5 excellent sets helping the Lady Bulldogs go undefeated in their two games in Week 2.

Nabor is also no pushover when it comes to crossing the ball to the other side of the floor as the playmaker averages seven points a game. Before the start of the season, Ateneo was yet to see who among its four liberos will be the starter or main defensive anchor.

First it was Jenelle Lo, who got the nod in the season opener, but for the past two games the role was passed to Dani Ravena.

And Ravena has slowly proven that she can become Ateneo’s backbone on the defensive end.

Ateneo won its first game this season, 1-2 so far in the tournament, and it was thanks to no small part to Ravena’s play.

Ravena registered 13 excellent digs and 10 receptions in the Lady Eagles’ victory over UST.